A week ago Thursday, when we got home from the art gallery after seeing the Basquiat show (posted about here), we had an email waiting from our pal Isabel. “Hey Guys, Would you be interested in two tickets to this show tomorrow night?”, it read. The offer was for a concert called Jayme Stone’s Lomax Project, to be held at Koerner Hall.

Not knowing anything about Jayme Stone we scrolled down to get a gist of what the show was about. There was a picture of a man (maybe 35 years old) standing with his hands in his pockets and a banjo strapped over his neck. The written description said, “Celebrating the work of folklorist and field recording pioneer, Alan Lomax, this project revives and re-imagines traditional music from Bahamian sea chanties to African-American acappella singing from the Georgia Sea Islands to Old World weavers’ work songs, to ancient Appalachian ballads.”

We were promised “fiddle tunes, and work songs collected from both well-known musicians and everyday folk: sea captains, cowhands, fishermen, prisoners and homemakers.”

We immediately wrote back, “Yes please, we would like to go”.

That evening, while having a glass of wine by candlelight, we listened to some of the the Lomax Project songs posted online. (It should be mentioned that we don’t regularly drink wine by candlelight — it was beautiful out so we were standing and looking out an open window and didn’t want the lights on, silhouetting us from behind, so we lit a candle. The fact that it made for a romantic moment was an added bonus.)

The music sounded good – I was especially taken by the female vocalist’s voice – but I must say, listening to a few songs through the tiny speaker of my ipad did not prepare me for what I was about to hear the following evening.

Koerner Hall is a special place, described as a “venue designed in the tradition of the classic ‘shoebox’ venues of Europe, built without compromise and with a mission to provide acoustic perfection for music of all genres”. Not only is the sound exceptional within the actual theatre, the whole building is beautiful. Built right alongside the historic building that houses the Royal Conservatory of Music, the modern multi-storied glass structure shares wall with the old building.

The Friday evening show began promptly at 9 o’clock, with a person coming out on stage and requesting that all cameras and phones be turned off. Without the intrusion of social media, we were invited to relax and enjoy the two-hour concert experience that was to come.

Then Jayme Stone came out and introduced the concept of his Lomax Project : each song we would hear had at one point, been recorded by folklorist and field recording pioneer, Alan Lomax.

Alan Lomax was born in Austin Texan in 1915, and is considered one of the great American field collectors of traditional music. At the age of 20, in 1935, he joined his father and began venturing out to small isolated communities in America, to take live recordings of whatever traditional music was being made there at the time. They recorded over 10 thousand songs for the Library of Congress, including Cajun music from Louisiana, ballads and fiddle tunes from the Appalachian Mountains, and blues from the Mississippi Delta. They traveled over 200,000 miles gathering samples, lugging around a Presto Disc Recording Machine.

Eventually he continued collecting folk music without his father, adding 5,000 more hours of recordings. In addition to having a passion for music, Lomax was very outspoken in his support of human rights. In 1949 he was reported as being a member of a communist front group, an accusation that would certainly have a negative effect his career in America, so he moved to Europe and continued making recordings in England, Scotland, Ireland and Spain. He returned to the US in ’59 and continued being actively involved in preserving, sharing and teaching about traditional folk music. He died in 2002 at the age of 87.

Today all of the old recordings have been digitized and can be listened to via this American Government site dedicated to Cultural Equity.

Alan Lomax also traveled with a camera and took many photographs of places and musicians, that can also be accessed through that site.

It is believed that if he had not devoted his life doing what he did, folk music as we know it today would not exist.

So, for this show, Jayme Stone, along with six other musicians, presented a selection of songs that had been amoungst those recorded by Alan Lomax.

Three quarters through the performance of the first song, a tingle ran up my spine to the top of my head. During the third song Oh Shenandoah, I was so moved that tears suddenly sprang to my eyes, at the moment that it changed from a slow haunting melody, sung by the female singer whose voice I’d liked so much when I listened to the recordings, Moira Smiley, to an upbeat instrumental part.

You can hear a recording of the song here – it’s the second one down, with a video created while the group recorded it in a studio.

After almost an hour the band took a break and the audience headed to the lobby for a drink.

A standing ovation and much calling for an encore followed the second hour of music. I thought it would be ok to snap a quick shot during the ovation.

The old traditional songs, combined with the acoustic perfection in that particular hall, the excellent stand-up microphone they used, and the group of very talented musicians made for a remarkable and truly memorable show. It was some of the most beautifully performed music I’ve ever heard live.

I’m very glad that we took Isabel up on her last-minute offer. Folk music is not our usual choice and, not knowing what we would be missing, we could easily have declined.

This show is currently touring Canada and the United States – their schedule of stops is here.

By total coincidence, we were back at Koerner hall the very next Thursday, for something else fun and interesting. I’ll tell you about our second visit within a week in my next post.

Thanks for checking out what I’ve been up to. If you’re here in Canada, I hope you had a great long weekend.
xo Lou

These stories were linked to.
At the Art Gallery to see the Jean-Michel Basquiat Show 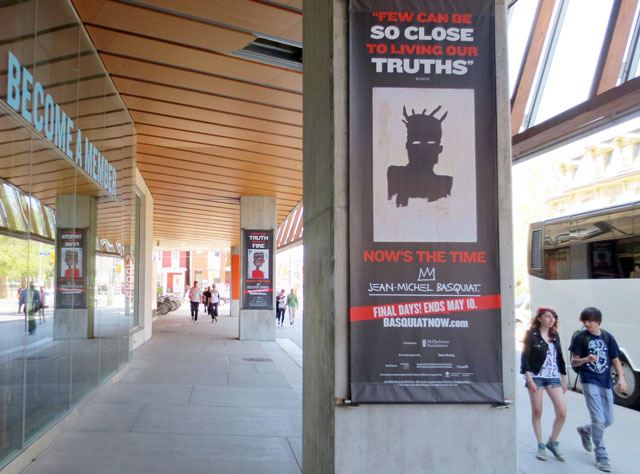