A Look at Roncesvalles Village

I was recently inspired by this article entitled “25 Daily Habits That Will Make You Smarter” and have been making an effort to incorporate the ideas on the list into my day. One of the suggestions that I found particularly interesting was Number 20 : Explore new areas. The description goes on to say, “If you can’t travel every day, at least try to find something new within your hometown. You’ll meet different people, learn new facts, and understand something new about the world. It’s a lot more productive than staying at home and watching TV.”

Then, by coincidence, the same week that I read that piece I received an email offering me the opportunity to explore an area of Toronto that I wasn’t very familiar with and then contribute to a magazine article being written about it. I responded with an enthusiastic “Yes”.

The neighbourhood I was to check out was Roncesvalles Village. This area surrounds Roncesvalles Avenue, which runs north/south, east of High Park, west of Lansdowne Avenue, and between Queen Street West and Bloor Street. Most of the buildings there were constructed in the early 1900s.

The street has long been known as the cultural and commercial centre of Toronto’s Polish community. A number of Polish-speaking restaurants, delicatessens and shops specializing in Polish goods are located on Roncesvalles Avenue. The sign “Mówimy po polsku” (“We speak Polish”) is displayed in some storefronts. (Quoted from Wikipedia, here)

Nick was into joining me on the adventure, which we began with a midweek lunch. Recalling two close childhood friends, each with a grandmother (both called “Baba” by everyone) who came from Poland and who used to cook traditional dishes, I was looking forward to tasting that food again. So we began our exploration of Roncesvalles at the Polish restaurant Chopin.

You can’t miss the upright grand piano and framed portraits of Frédéric Chopin that grace the entryway of Chopin Restaurant. These make sense given that the virtuoso pianist was born in Poland, and traditional Polish fare is what you’ll find here. Their Pierogi, considered to be some of the best in the city, are offered with a variety of fillings, topped with fried onions and a sprinkling of fresh dill, served with a dollop of sour cream. Generously portioned cabbage rolls, schnitzel, and potato pancakes are all good choices, or if you can’t decide, try the mixed plate.

After some deliberation over the menu, I decided on the Pierogi, although the Potato Pancakes were a close contender. When I couldn’t chose which of the delicious sounding fillings I wanted in my dumplings, the friendly server suggested a mixed plate.

Nick went for the Chopin Schnitzel which came with sautéed mushrooms, three kinds of marinated salad and made-from-scratch mashed potatoes.

The food was tasty and the servings large, so we left the restaurant feeling well fed indeed.

The following Saturday afternoon was a lovely one, perfect for a little trip, so we jumped on the streetcar and headed over to Roncesvalles again. The plan was to walk the entire strip, checking out shops and sampling restaurants as we went.

We first went for a drink at The Ace.

Lovers of vintage things will appreciate the look of The Ace, given its location within an updated 1950s diner, with many original fixtures intact. While this friendly place is a treat for the eyes it doesn’t withhold anything from the taste buds. A specialty is the Country-Fried Chicken, crispy and golden, served with greens and and cornbread for dinner, or in sandwiches later in the evening. Children are welcomed with their own menu of fun choices. The bar is open late 7 days a week, so drop in for a snack and a creative cocktail. Also open for weekend brunch.

There were two special seasonal cocktails being featured, so we each had one of them. Mine was a Martini made with vodka (it usually has gin but they made a substitution), a syrup of pear, ginger and vanilla and some sliced strawberries. Nick’s was called a Watermelon Fizz.

We sat at the bar with the sunshine streaming in, enjoying the drinks and taking in all the little details in the beautiful space.

Next, after we’d checked out some of the nice shops along the street, thoughts of a snack and a cold beer came to mind, so we popped into another of the Polish restaurants, this one called Café Polonez.

Surrounded by people conversing in fluent Polish and reading a menu that lists your choices in that language, you’re certain to be in a restaurant that offers authentic traditional cooking. Add in the fact that Café Polonez has been in operation for over 30 years, and you know this family-run establishment has to be good. It is open daily for lunch and dinner, so you can enjoy their freshly prepared soups, salads and other homemade delicacies whenever the craving for Eastern European comfort food strikes. If you like beer, there is a good selection of Polish Pilsners to be had.

I had a bowl of Beet Root Soup with Dumplings and Nick chose pickled herring, which he was curious to try having never had it before.

We had arrived just in time to beat the dinner crowd and watched as a line up began to form, which was a testament to how good the food was.

We happened to have come to the neighbourhood while there was a flea market going on, so of course, we took a look. Readers might know that I have a thing for vintage textiles and there was a vendor there with a booth filled with lovely things to choose from. I bought a linen tea towel.

Then we continued our walk up the street, admiring the buildings and all the flowers that seemed to be everywhere.

This place is called Barque Smokehouse and was full to capacity when we passed by. The food we spotted being brought to tables looked amazing, so we’ll definitely be going back to get some of that goodness for ourselves!

Located in a beautiful historic building, this restaurant boasts a genuine pit-barbecue and the passion and know-how to create unforgettable food. At Barque Smokehouse you’ll find an original approach to traditional barbecue. Diners are greeted with a bowl of popcorn to snack on while they chose their meat and sides – the ribs and brisket are favourites. The place is popular so you might have to wait, but you’ll do so in comfort in their separate lounge located a few doors over. Reservations are accepted if you’re planning ahead. Ask for a spot on their lovely outdoor patio.

In reading about the neighbourhood before coming, I had seen that there was a restaurant specializing in Canadian East Coast food on Roncesvalles. What particularly caught my attention was a dish called “Halifax Donairs” they had on their menu. I’d heard about these sandwiches from a friend I used to work with, who came from Halifax and raved about them. Apparently Hopgood’s Foodliner is one of the only places in Toronto who serve an authentic version and I was keen to try some.

When chef Geoff Hopgood moved from his East Coast home, he didn’t leave the food he loved behind. Instead, inspired by Maritime ingredients, he opened a restaurant, Hopgood’s Foodliner, where you’ll enjoy a variety of fresh sustainable Atlantic seafood, locally sourced meats and organic produce. Try the Halifax Donairs – two fluffy pita bread rounds, folded over mounds of sliced seasoned meat, topped with tomatoes and a unique sweet and savory sauce. They’re messy but delicious, served on a flattened paper bag to catch the drips. The space is decorated to evoke the seashore, while remaining clean and cool.

The Donairs came two to a serving so we decided to split an order and also have a cheese plate with homemade crackers and onion jam. The cheese was Glengarry Lankaaster described as a “Firm ‘Washed-Curd’ Cow’s Milk Cheese, Crafted in Ontario. Aromas are Soft, Sweet and Reminiscent of Gouda”.

To drink I had a Cider made with hops, called Revel Cider. Nick had a cocktail called a Midnight Meeting that contained Havana Club 7 Year, Coffee Infused Vermouth, Lime, Demerara and Black Pepper Bitters.

Everything was really good. The Donairs are somewhat messy to eat, so they came with a finger-bowl for cleaning our fingers. Another nice touch was that the bill arrived tucked into a seashell.

We had originally planned to have coffee and dessert at a spot called The Westerly, where they have a dedicated pastry chef. However when the time came we felt that we could eat no more so we’ve saved that for a return trip soon.

Dark wood, clean lines and beautiful lighting set the ambiance at The Westerly. Start with Grilled Sourdough Crostini, topped with ricotta, roasted grapes, pecans, sriracha honey and arugula. Mains include beef, chicken, pork and fish, each served with interesting side dishes, like the cheese grits, and fennel and pineapple salad that accompany the Seared Pickerel Fillets. Vegetarians are not left out, offered a choice of Crispy Dumplings or Roasted Cauliflower with seasoned potatoes, spicy pickles and papadums. Consider going for their Sunday evening Roast Beef Dinner. They have an in-house pastry chef, so save room for dessert.

Having had a fun day, we caught the streetcar home.

Our visit to this previously unexplored-by-us part of the city felt very much like we’d been away on a little vacation. We really enjoyed hanging out in this great looking area, filled with neat shops and excellent places to eat and drink.

I’ve run out of room here to show you more of the sights and shops, so I’ll be back with a second post about our adventures in Roncesvalles Village.

Oh yes, and as per the article about daily habits that will make us smarter, I do feel like I’ve gained something by checking out someplace new!

Thank you for dropping over.

In my next post I’ll be writing about some of the shops on Roncesvalles Avenue.
xo loulou

These stories were linked to.
Exploring Toronto : Some Shops and Sights on Roncesvalles 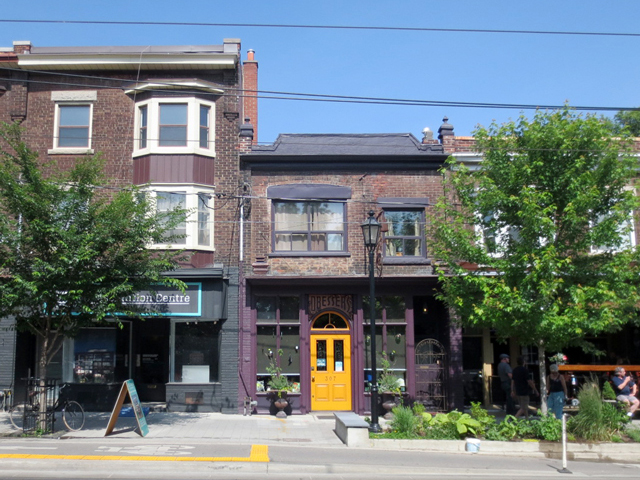