All Dressed Up With a Good Place to Go : The Conservatory of Music’s Royal Occasion

Wednesday was the annual Royal Occasion party, held by The Royal Conservatory of Music — it’s a celebration to welcome three new Honorary Fellowships to the conservatory. To quote the program, “Our Honorary Fellows cross all musical genres and geographic areas, reflecting the rich history and diversity of Canadian music. These talented individuals have had an indelible impact on Canada’s cultural landscape, strengthening our society and facilitating creative development on a global scale.”

This year, the three inductees were opera singer Ben Heppner, rock legend Burton Commings and arts philanthropist Henry Hung. The event is held at It is held at Koerner Hall, which is a newer building that adjoins the historic Royal Conservatory building, on Bloor Street West. (Here is a post dedicated to these noteworthy buildings, if you’d like to see.)

Lucky for us, our friend Isabel works there and invites us to the performance and award presentation portion, and the reception that follows. It’s a fancy and fun evening, during which we get to hear some of Canada’s most respected musicians perform within a hall which is world renowned for its excellent state-of-the-arts acoustics.

Ben Heppner retired from singing a few years ago, so it was quite a gift to hear him sing three songs. Burton Commings was as charming and personable as he is talented, accompanying himself on piano while he performed. In addition to these two musicians, there were a number of pieces presented by current and former students of the conservatory and one by their New Canadian Global Music Orchestra, which includes musicians from around the world who now reside here.

↑ There was a dinner for supporters of the conservatory preceding the show, and we arrived just at those guests were finishing up, so had a quick peek at the lovely decor for that part. Having entered from the lower level, we passed arrangements of lush silver velvet sofas which, during the show, magically replaced all the dining tables in the reception hall, providing seating during the after-party. ↑

↑ Inside the hall. The three covered easels on stage hold the framed certificates that were given to the recipients. ↑

The beautiful furnishing, combined with the dramatic lighting, and stunning floral arrangement made for an enticing environment indeed. The furniture was provided by Contemporary Furniture Rentals and the flowers by Emblem Florist, in case you’re planning a party yourself. If so, keep in mind that the reception area of Koerner Hall can be rented.

Unfortunately we weren’t quick enough to sample and photograph the tasty looking desserts that were served. The caterer was Daniel et Daniel who catered our wedding, so I can say from experience, that they make delicious food.

↑ The band who entertained during the reception were a Cuban Jazz ensemble called OKAN. ↑

↑ We had an interesting chat with this couple, Monica and Marc, who love the shows at Koerner Hall and go frequently. Both were skilled storytellers. ↑

↑ It’s hard to wrap my head around the fact that these small figurines, amoungst a collection of artifacts in the showcases that line the hallway between the historic and new buildings, are from the Sui Dynasty, making them almost 1,500 years old! ↑

It was a very good time and we are grateful to have been invited. So, our thanks to out to Isabel and The Royal Conservatory of Music!

And, thank you for reading,
xo loulou

These stories were linked to.
Hauntingly Beautiful : The Royal Conservatory of Music Building 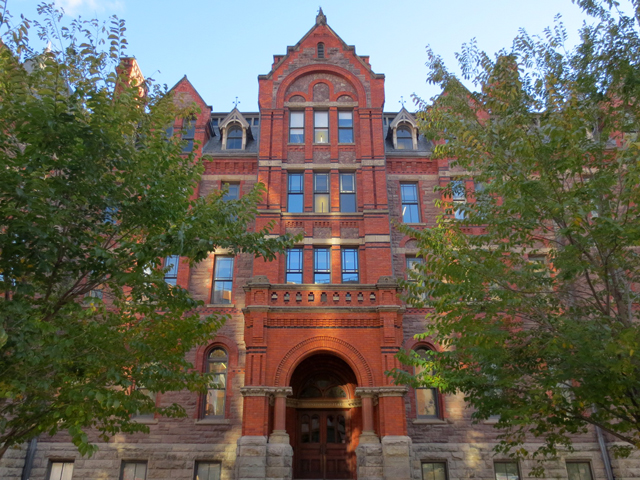