At the Gallery : “Early Rubens” Exhibition at the AGO

Follow Up : The “Early Rubens” exhibition has been quite popular so the AGO has extended their hours between Christmas and New Year’s Day, and, while they will be closed on Christmas Day, they’ve added an extra day by opening on Monday, December 30th. See the holiday schedule on their website, linked below.

Greetings Art Lovers in Toronto — That includes residents and visitors alike, as, I think you’ll all want to see the very special exhibition on at the AGO! “Early Rubens” opens to the public this Saturday and will run until January 5th, 2020.

Flemish artist Peter Paul Rubens was born in 1577 and lived for 62 years, until 1640. (Given that the average lifespan in Europe at that time was 35 years, his longevity was remarkable in itself.)

He was classically educated, ran his own studio, became an active diplomat, and city-builder and was even knighted. He was also one of most the renowned painters in Western art – widely recognized for his dramatic, evocative, style.

Containing 30 paintings and about 20 illustrations and etchings, “Early Rubens” is a revealing exhibition of works produced between 1609 and 1621, a crucial time that marks Rubens’ rise to prominence on the world stage. Some of Rubens’ most remarkable, ambitious and large-scale oil paintings and works on paper are included.

The exhibition was organized in collaboration with the Fine Arts Museum of San Francisco and comes to us after a period in that city. The works were generously loaned by museums and organizations from around the world and include many pieces that have never been seen before in North America. And, based on the challenge and risk of moving such important and fragile artworks, many will likely never be seen here again, at least not for a very long time.

So, seeing “Early Rubens” at the AGO this autumn is a once in a lifetime opportunity!

↑ Dr. Alexandra Sasha Suda, Director and CEO, National Gallery of Canada and former AGO Curator of European Art, giving her insights and opening the show. ↑

Admission is (always) free for AGO Members and visitors 25 and under. Also, the $35 “AGO Annual Pass” covers this show and everything else the AGO has to offer for the next year.

While there is no extra cost to see the Rubens Exhihition, viewings are timed, so it is recommended that visitors book a ticket/time slot in advance at the gallery’s website.

They have another one of their very fun “All Hours Parties” coming up on Saturday, October 26th, a showing of Diane Arbus photographs coming this spring and a Picasso exhibition on this summer, so, now is an excellent time to get your annual “one price covers all” pass.

Additionally, if you like to draw, regardless of skill level, there is this going on: “POP-UP DRAWING STUDIO – Inspired by Rubens’s mastery of the art form, visitors are invited to try their hand at drawing in Walker Court daily throughout the run of the exhibition. Featuring a Baroque-inspired backdrop, live models will be present most Tuesdays, Thursdays and Saturdays throughout the run of the exhibition, from noon to 3pm, and on Wednesday and Friday evenings from 6 to 9pm. Free with admission, materials will be supplied.”

And now for a peek at some of the wondrous Rubens works currently hanging at The AGO. It’s somewhat mind-blowing that these 400 year old pieces of art are here in Toronto, looking as bright and colourful as they do.

(I took these photos without flash in a challenging lighting situation, so they are inevitably a little blurry and don’t do justice to the actual art, which you’ll want to see with your own eyes!)

↑ This angel originally topped a massive three-panel altarpiece in the Church of St. Walburga in Antwerp. ↑

↑ The backside of the triptych seen above. The side panels are hinged so, when closed, you’d see these two paintings.

↑ As a nice added bonus, two harpsichordists will perform baroque duets while visitors enjoy the art. ↑

↑ A book, amazingly from 1614, containing illustrations by Rubens, is displayed in a case, and a series of engravings hang in frames. ↑

↑ A selection of the AGO’s gilded goblets and vessels are displayed in a case beside a painting that features similar items, demonstrating Rubens’ technical brilliance as a still-life painter. ↑

↑ Rubens’ ability to represent these beautiful lions in such detail would have be due to the fact that big cats used to have a natural habitat in Europe back in the 1600s, while today, that has dwindled considerably to small pockets in Africa. ↑

↑ Not for the faint of heart, “Head of Medusa” c 1617/1618 contains plenty of hair raising detail. (I’ll admit, I quickly took the photo, but didn’t look at it very closely. Even just looking at the picture now sends shivers down my spine.) It is on loan from the Czech Republic. ↑

↑ “The Massacre of the Innocents” c 1611/1612 illustrates one of the new testaments’ most violent stories, when King Herod who ruled Judea at the time of Jesus’ birth, ordered all boys under the age of two to be killed.

This painting is part of the AGO’s collection, thanks to Canadian businessman and art collector, Kenneth Thomson, who purchased it for the gallery at auction in 2002 for C$117 million dollars. ↑

Thank you to the gallery for inviting me to the preview and to you for reading this. I hope I’ve helped make “Early Rubens” at the AGO a must-see for you.

These stories were linked to.
Big News at the AGO and a Party to Celebrate it 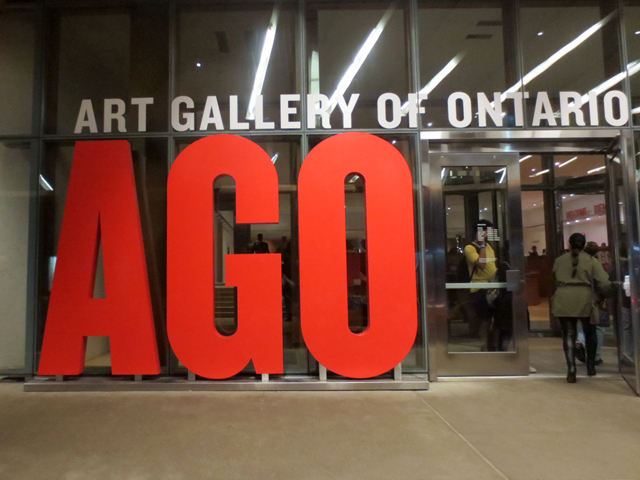