Party Time and What I Wore

As mentioned the other day, I went to two parties last week. I make a point of repeating this fact because it’s not often I go to more than one in any given week!

The first one was a launch party for this year’s Toronto Fashion Week Gala event. For several years now this big fashion show, held on the last night of fashion week, has been organized by our friends Chris and Jim. They are designers under who go by Hoax Couture, but their focus for this specific annual event is raising funds for children orphaned by Aids in Africa and the grandmothers who care for them.

What happens at this show which will take place in March, is that a group of local designers are given a length of African printed cotton, and asked to incorporate it into a piece specifically made for this runway show. Then, the garments are modeled by local celebrities. It is always such a fun event and all in honour of such a good cause.

The arrangements to properly distribute the funds raised are done through The Stephen Lewis Foundation, and he usually comes to the gala and speaks.

So the party we went to last week was the kick-off for this upcoming event. It was held at a generous couple’s home, who volunteered to host. And what a spectacular home it was. We spoke to the owner who told us it had been built in 1923. He and his wife, clearly avid art collectors with impeccable taste, had it renovated beautifully.

The night was a particularly miserable one weather-wise, with lots of rain pouring on recently fallen snow, turning everything into a slushy mess. This being the case, we wore boots and brought along some clean shoes to wear indoors. So the flats in the outfit pictures are the ones I brought. I wanted something I could slip on easily and not have to fuss with buckles. I have made that mistake before and for the life of me could not do up the little tiny buckle of my shoe without having my arse in the air for an inappropriate length of time, all the while giving a great view down the front of my shirt as I bent over! Let’s just say, I learned my lesson on that one, and now only bring easy to put on shoes to parties!

On that note, I remember as a child, coveting the beautiful black velvet shoe-bag that my mother had to tote her shoes to parties. I thought it was so sophisticated and special because it meant my pretty mother was going to get all dressed up and we would be staying home with a sitter. I remember the bag was lined in plastic to keep things clean, and had a draw-string handle.

We have no special bag for shoes, but I am now thinking about making one. I laughed because Nick was the one to pack up for this party and he had our shoes in an plastic bag, clearly stating the name of the store it came from … Value Village! (That’s a thrift store here.) We’re classy like that. I had him switch them over to a fabric shopping bag.

But I wonder why people don’t use shoe-bags anymore? Here in Canada, with the awful weather we get in the winter, combined with the salt and gravel they sprinkle on the streets to keep people from slipping on the ice, makes for pretty grimy footwear. I would feel terrible traipsing into someone’s beautiful home with dirty wet boots, but also can’t stand the feeling of walking around in stocking feet. Plus it’s not very elegant. So I bring shoes (or slippers if it’s a more casual affair … I have a cute pair I reserve only for going to other peoples’ houses).

But seems we were almost alone on that one at this particular party, as there were only a few pairs of boots lined up at the door, and I didn’t see anyone in stocking feet. So I assume people just went in with their outdoor footwear. (I’m not passing judgement here, just observing.)

Once I went to a Christmas party at someone’s home and at the door they had a big basket filled with many pairs of one-size-fits-most satin slippers for their female guests to wear indoors. (The men wore their socks). I thought that was an interesting touch.

I’d love to hear your opinion on this topic. If you live in a place that gets snowy weather, do you bring a change of footwear when you go to someone’s home?

Outfit details : Jacket – Reaction by Kennith Cole. Skirt – Calvin Klein. Top – Cable and Gauge. Sash – From a kimono my mom used to have. It’s long gone by I kept the belt. Shoes – Geox. Tights – Trimfit. Purse – Coach. Necklace – this one Nick bought me on our recent anniversary trip to the island of St. Martin.

Thank you for dropping by.
xo loulou

These stories were linked to.
Souvenirs and Gifts from St. Martin 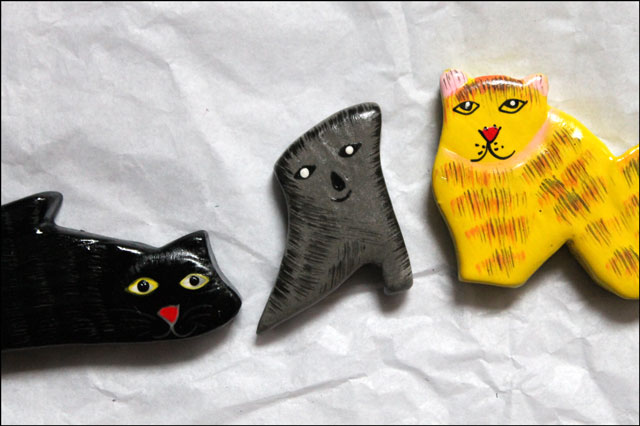