And dessert was Caramelized Pear Upside Down Cake

In my last post (here) which was about bad inner outdoors we had with a friend on the weekend, I ended with a picture of Nick eating dessert. So this is what he was eating.

It is Caramelized Pear Upside Down Cake , which I made by following this recipe over at Fine Cooking dot com. There is a good reason that it has a rating of 5 stars out of 5, given by people who have made it!

Not only did I love the way it looked, with the caramel sauce bathing the decoratively arranged slices of pear beautifully, it was so delicious.

Here are some observations that I gleaned from this baking experience, for your reference should you make it too, but also for my own because I will surely be making it again.

– I found that one Bosc Pear was plenty, although the recipe called for two.
– The caramel sauce is made separately from the cake and poured over the pear slices before the cake batter is added and something to note is that (as pointed out by many who reviewed the recipe) the sauce browns very quickly once it begins to change. Basically, you boil off the water and as soon as it is gone the sugar begins to melts and turns colour in a matter of minutes, so at that stage you really don’t want to take your eyes off it, as it will get too dark and taste burnt. You want it to be a golden amber colour. I was warned about that possibility and mine turned out fine. Also don’t forget to swirl the butter into the sauce as instructed before adding it to the pan, like I almost did.
– In my oven the cake was ready in 40 minutes (the recipe says 35 – 45 minutes).
– I left the cake in the pan after it was baked for at least a couple of hours before turning it onto the plate, and it was just fine. So if you’re doing other things and don’t have room in your kitchen to turn it over right away, don’t worry about it. This might be good to know if you want to transport this cake, as it would be a heck of a lot easier to move it while still tucked safely in the pan in which it was baked.
– When you do turn it over, make sure your plate is a large one and has a lip because the caramel sauce is quite liquid. My plate (which was actually the tempered glass insert from our old microwave oven, which I decided to go with after I noticed that a dinner plate would not be big enough), was just large enough but could have stood to be a bit bigger.
– The recipe says this serves 8 but we found that it made 10 nice sized servings along with a scoop of French Vanilla ice cream … we had dessert until Wednesday! It kept beautifully in the fridge and we warmed the leftovers a bit in the microwave.
– We also have an extra Bosc Pear because we bought two (see the first observation), so I considered making another one … for about a minute, and then decided no, I’ll use it to make this Pear, Feta and Cashew Salad instead.

Thank you for dropping over. I appreciate your online company and wish you a great weekend!
xo loulou

These stories were linked to.
Last Barbeque of Summer 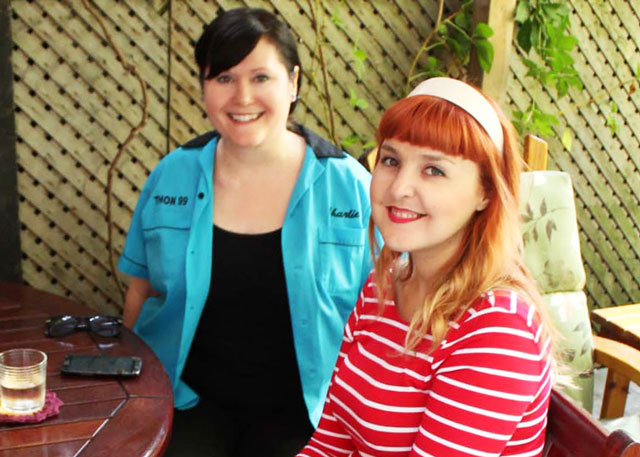 Pear, Feta Cheese and Cashew Salad with a Tarragon Dressing 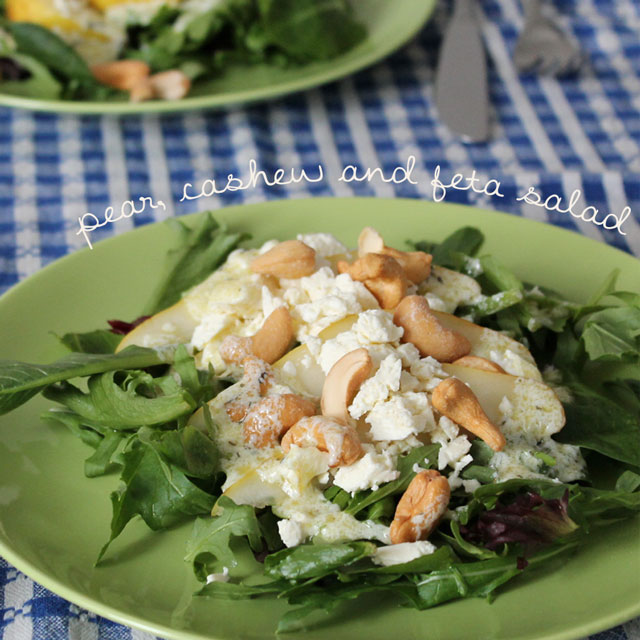