An Old House Stands its Ground

I recently wrote this post about one of the oldest houses still standing in the Queen Street West neighbourhood to Toronto. The pictures in the post depict a cute little yellow place on the verge of being torn down to make room for a new condo development.

But it’s not all ‘knock down the old and build something new’ around here and today I’d like to show you an example of a different old house, no more than a five minute walks away from the one previously discussed. It is slightly newer than that other house but still steeped in the history of the area. It would have been built on land that was previously forested, towards the end of the 1800s, making it more than a hundred years old. (Not very old in comparison to more ancient cities around the world I know, but Toronto is a relatively young city, and this house would be among the oldest.)

As you can see by the photos, it has a twin attached to its side. They were probably built to house a couple of new families (perhaps relatives?) willing to move to the ‘new frontier’ as there wasn’t much out this way at the time and land in this part of the city was essentially being given away, in an attempt to get the area going.

If you walk along the streets around here you might notice some very old looking houses right next to ones with a completely different and slightly newer style. That is because the houses were first built with very large yards, with room for vegetable gardens. But those extra gaps between the houses were filled in over the following decades, leaving a patchwork of very old places interspersed with newer ‘old’ ones. These two would have been some of the oldest ones.

There are also some examples in the neighbourhood (but fewer than you’d think) of considerably newer houses that would have been built in the past 50 years, after the original houses had been torn down and completely replaced. That appears to have been the case with the big grey one beside these two which looks to be quite new.

I took these shots last week, on two different occasions a couple of days apart, in case you’re wondering why the (gorgeous) door was open in some and there is a big dumpster out front of others.

↑ The houses were built right on the ground, without a basement (maybe there was a small root cellar) so they are currently digging out a basement. ↑

Here’s a cool surprise that I found by going around to the back alley. Check out the little ‘twin’ … while it still looks very old from the front and matches the one now being renovated, someone has built this beautiful modern extension on the back.

The renovation of the place in these pictures will take a while to complete, and I’ll remember to show you the final outcome later in the year.

Thank you kindly for your visit.
xo loulou

These stories were linked to.
The Little Yellow House Takes its Last Bow 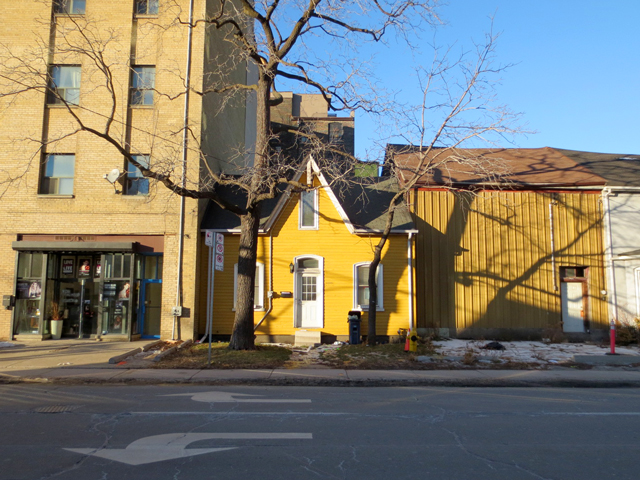