We have a window in our kitchen that looks directly out into the top of an old maple tree. Unfortunately, the tree is slowly dying and there’s nothing we can do to stop it. At this point about half of the branches have leaves and half are dead. We’ve had an arborist look at it and they’ve told up that it’s just nature taking its course and the tree has simply come to the end of its life cycle.

There’s an upside to this sad demise, though, in that birds, insects and squirrels really enjoy hanging out on its leafless limbs. We’ve always had birds in the tree, but now it seems like there are more of them and a wider variety. It could be because we can see them better now without the leaves, or it could be that the animals are really drawn to whatever food they’re finding on the dead wood. We’ve seen them munching away out there, on who knows what.

Since I’m not an experienced birder, I’m afraid I can’t tell you exactly what all of these are. I really tried to identify them but it’s hard because there are so many variables that come into play with birds, such as their age (a chick looks different than a fledgling of the same species, and adults look different again), gender (sometimes males and females are hard to distinguish from one another, as with American Robins for example, but sometimes they’ll look quite different from one another), time of year (some birds look quite different in the winter/spring than they do in other seasons). Also, there are a lot of different birds flying around our province, especially in the spring and summer, when many species migrate up here to breed. A recent count by the “Ontario Birds Records Committee” determined there are 501 species in the province, including those who visit from the south. Anyway, I’ve spent too much time trying to figure these all out and just had to give up on some of them.

While doing the research, I came upon a new-to-me term used within the birdwatching community — “Lifer” : (noun) The very first sighting of a bird species that had never been seen before by the observer.

Amoungst these photos, there are a few lifers for me and perhaps there are for you, too.

I’ll begin with those …

↑ This olive coloured one, with a bright yellow stripe on its head, looks like a thrush but might also be a kinglet. ↑

↑ Another one with a distinct yellow crown … It might be a Golden Crowned Sparrow but I’m really not sure. ↑

↑ This is a “lifer” that I was able to identify … it’s a White Throated Sparrow. We have plenty of “regular” house sparrows living in Toronto all the time , however this one with the yellow near its eyes, was just passing through on its way north where is would nest. I can’t determine if this is a male or female though, because apparently the genders don’t look much different. ↑

So, those three were the recently seen “lifers”. As for the next ones, while I’ve seen permanent resident House Finches before, I’ve never noted their newborn chicks. This spring we had a mating pair in the yard so I was able to get some shots of these baby siblings, with their adorable messy hairdos. I was too busy looking at the babies and didn’t get a photo of their beautiful red-headed parents but I’ve written about them before, in this post if you’d like to see what they look like.

While we’re looking at babies, here are some common House Sparrow chicks being fed by their mother (or is that the father?) This is a fairly common sight in the spring but I never get tired of seeing it happen. One of these babies is in the very first photo, too.

The next few are not common here but I usually do catch a fleeting glimpse of them as they fly through the city in the spring and autumn. They only stay a day or two and then they’re off.

↑ Ruby Crowned Kinglet — I’ve photographed one of these before including shots of it showing off its impressive red crown, found in this post. ↑

Here’s an example of a bird that looks different at different times of the year — The European Starling has white dots on their feathers in the winter and early spring but they wear away by summertime, when they have glossy iridescent dark blue green plumage. So, that indicates I took this photograph in the spring before it lost its spots.

An interesting tidbit bout European Starlings in North American is that, in the early 1890s, a hundred of them were brought over from Europe and intentionally released in Central Park in New York City, by a group of people who, it is said, wanted to collect some of every type of bird mentioned by Shakespeare in his plays. Those 100 birds bred and spread to cover North America today, and without natural predators, in some places their numbers are considered invasive and they have to be culled. We don’t have too many of them here in the city, though, and it’s still a treat to see one.

In closing, I’ll leave you with another iridescent beauty with wings, not a bird but a dragonfly.

Thank you very much for looking. xo loulou

These stories were linked to.
Songbirds in the Garden : Some House Finches Come to Visit 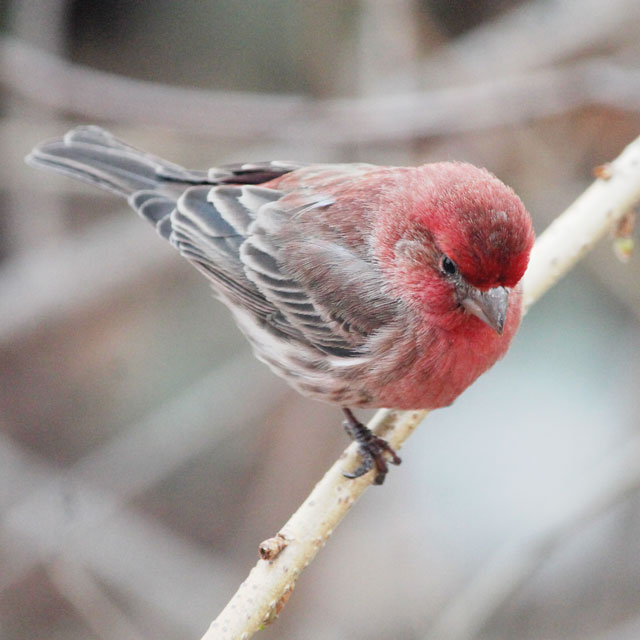 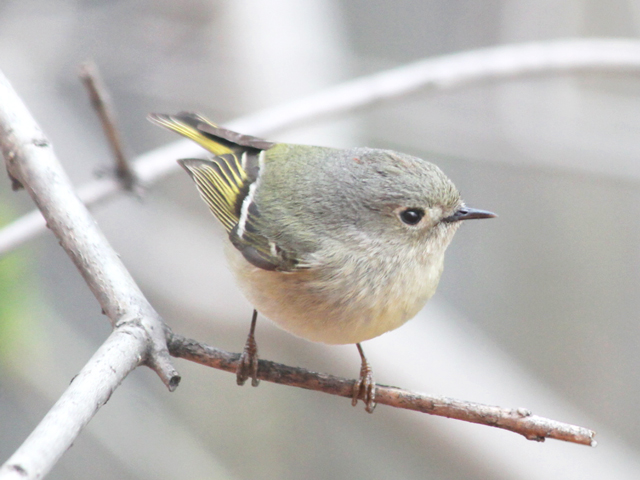