There’s one particular window in our home, that all the other windows must be jealous of. It undoubtedly gets a lion’s share of our time.

High above the ground on the second floor, it looks out directly on the treetops of the maples lined up beyond it. Past the trees is a small patch of grass frequented by dog walkers, and along that runs a sidewalk that gets quite a bit of foot traffic.

There is always something interesting to see out that window, and we both stand at it often, looking out. Oftentimes we stand side-by-side, our shoulders glued together as we can barely fit, and talk while watching the world go by.

Being up a story means not many people ever think to look back at us. Well, at least, I always assumed it was, until the one day my neighbour waved up at me there, while she rode by on her bicycle. So, I guess some people are aware of our secret window, but most are oblivious to it.

In the fall, the leaves of those maples turn the most incredible colours and then drop, suddenly leaving us with a clear view of the snow-falls that follow. We see people trudging by, bundled up in hats and scarves, with steam blowing from their faces with every breath.

At this time of the year, the springtime, the leaves of these deciduous trees are just coming in, amid the puffs of flowers that maples have.

In a month or so, we’ll barely be able to see the sidewalk, and our window perch will offer a view of nature in all its glory. We’ll see the bush-trees flower — these are the forsythia, lilac and hibiscus bushes that were allowed to grow wild long before we moved here, un-pruned until they reached heights uncommon in their species (they’re discussed here). Bumblebees and butterflies, and the common birds that live here year round will great us in the afternoon, buzzing and chirping so loudly that we’ll hear them through the screen that blocks their entry inside. I often take the screen off and nearly stand amoung them — Nick has to remind me to put it back up, if we don’t want all that nature, aka insects, inside the house.

Squirrels will chase one another through the branches, snatching the maple keys that they so enjoy, cracking them open and eating the soft inner seed, right in front of our eyes.

There is so much to see out this square of glass. But, with all there is, the spring and autumn visits of the migrating birds, that come to and from the southern United States and Mexico, flying through Toronto on their way to their summer and winter homes, are my favourite sights. They are fleeting, stopping by for a day or two, before they continue their journey.

It is during these periods that I leave my camera, loaded with the telephoto lens, ready for action, on the table near the window. I must be very quick to catch these special guests.

Most of the time, I have no idea what kind of bird I’m seeing until I research it later. This was the case with the ones pictured today.

These are Ruby-Crowned Kinglets.

They’re not uncommon in general, however, since they only pass this way very briefly as they migrate, I’d venture to say that few Torontonians have seen them in the city. To make them even more unlikely to have been seen, is their extremely tiny size.

It’s hard to see scale from these pictures, but these are the smallest birds I’ve ever seen, aside from hummingbirds. In fact, they are barely bigger than hummingbirds, coming in at between 3.5 and 4.3 inches long, versus the hummies that are 3 to 5 inches on average. To give further perspective, they are perched on branches of a Forsythia and the leaves you can see are about the size of a thumbnail.

It was Nick who noticed them first, calling out to me that “my” birds were here.

This is the male …

His lady flitted around nearby. She is exactly the same as her mate, but without the red crest …

Thank you for taking a look. I hope you’re having a great week so far.
xo loulou

These stories were linked to.
Thanking Strangers from the Past for Pleasures of Today 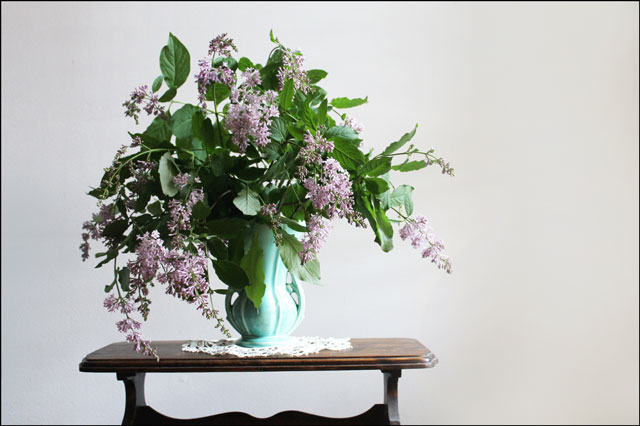