Mystery Solved : The Case of the Little Chestnut Tree

There’s a small chestnut tree growing in the narrow garden beside our home. I first noticed it about six years ago when it was merely a few leaves coming up from the soil. While it had sprouted in a spot that I’d rather have planted flowers, I’ve never had the heart to pull it out because, from what I’ve read, it’s not easy to germinate a chestnut and get it growing, so that little tree has won its place in the world.

I’ve always wondered how it got there, though, as we didn’t plant it and there are no chestnut trees growing anywhere nearby. I’ve considered the possibility that a squirrel could have carried the nut over, dropped it, forgotten about it, and it began to grow. But that didn’t really make sense because, having watched the squirrels around here and how they dig and eat and eat and dig, I find it hard to believe that such a prize would have been forgotten long enough to grow roots and settle in.

Then last week while out in the garden with my camera, I came upon this cute squirrel and began taking pictures. It was through my lens that I saw him find a chestnut in the soil, pick it up and begin to devour it. The squirrel got spooked by my presence and took off before finishing the nut, taking what was left of it with him clenched firmly between his jaws, but I thought the mystery of my chestnut tree had been solved. That was evidence that a squirrel had very likely brought the nut that grew into the tree to the yard, wasn’t it?

But scanning the soil, I spotted another chestnut, and then another, and another. No doubt, some human intervention had occurred here, but unlikely unless some stranger had come up the walkway, opened the gate, walked around the building, dropped the nuts and then turned around and left. Who would do that? There was only one possibility … It had to have been Nick!

I went inside to find him working at his computer. When asked he replied that yes, he had put the nuts there. He had gone to Kensington Market earlier that day and had stopped to pick up some chestnuts under the big tree to bring home for the squirrels. Apparently, without my noticing before, this was something he’d been doing in the autumn for a few years.

So, this was why there is a small chestnut tree growing in the garden beside our home.

When he mentioned the big tree I knew exactly which one he meant — it’s the one shading the path in the park we walk along when going to the market (if you live in Toronto and are curious, it’s in Alexandra Park, south of Dundas, east of Bathurst, and the tree is beside the path that runs north/south between the baseball diamond and the schoolyard).

It’s a beautiful tree. In the spring, its flower fountains are lush (if you’re wondering what a chestnut tree looks like in flower, there are some pictured in this post). In the autumn the path underneath it is littered with spiky nut pods, some broken open to reveal the shiny red chestnut inside.

Nick and I walked over to this grand tree yesterday afternoon, Thanksgiving day. It was lovely out — very sunny and remarkably warm for this time of year.

If it was Thanksgiving where you are, I hope you had a wonderful weekend.

Thanks for dropping by,
Xo loulou

Update : It’s been years since this happened, and in the meantime we discovered that Toronto residents aren’t supposed to feed the wildlife.  In fact, a family was fined for feeding peanuts to a squirrel in 2021.  So, Nick stopped bringing the chestnuts home but the little tree is still alive and well!

These stories were linked to.
A Tree House Patio and a Cool Concert 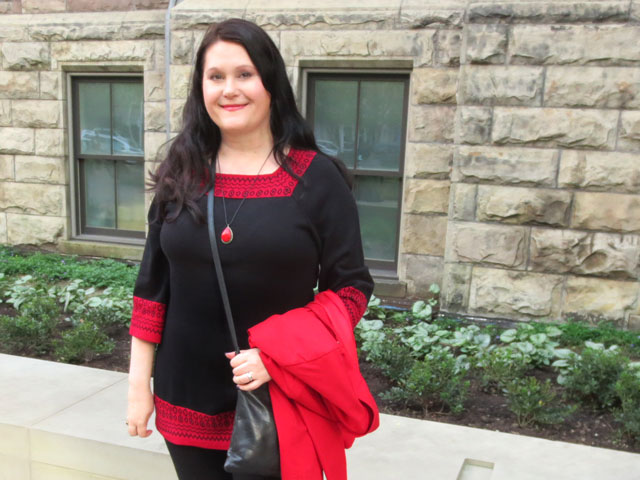