A year and a half ago I wrote this post about Nick’s first attempt at home preserving food. He’d never tried it before and his curiosity in the kitchen took him there. At that time, he had just bought a huge pot with a lid, some special tongs, a funnel with a wide opening and a boxes of Mason jars, and got busy preserving some tomatoes. Well, they turned out very well, and since then he’s kept us and many of our friends stocked with home preserved tomatoes.

Once he’d learned the ropes he also began preserving pickled beets. He used to make them before — shown here — but they weren’t sealed and sterilized by boiling, so had to be kept in the fridge. This meant we would have a big jar of beets taking up room in the fridge, and there was some waste because we just wouldn’t get through them quickly enough. So, he began putting them in smaller jars and putting them in his cauldron the same way he did the tomatoes. Now they can be stored in the cupboard until a jar is opened.

Along the way he had to replace his special tongs with a more sturdy pair, but aside from buying additional jars and new lids (the jars come with lids but they’re also sold separately, because you should use new lids with every batch in order to get a good seal), the only thing we’ve had to buy are the ingredients. A word about pickling salt — make sure you use that as opposed to regular table salt because that has iodine added to it, which will keep you safe from developing gout but will ruin your pickles. Also, vinegar that is labeled “pickling” is necessary because it’s more acidic than the regular stuff.

This all brings us to today and this post about Nick’s newest home canning adventure : Pickled Hot Pepper Rings and Dill and Garlic Cucumbers.

Once we had all the ingredients, the supplies together, and the water boiling, the whole thing was done in under an hour, and we had six glistening jars looking pretty on the counter. Yes, we did keep popping back into the kitchen that evening to look at them. It’s the small things, lol!

We haven’t tried the Dill Pickles yet, but the Hot Pepper Rings are really good. We had them cooked into a grilled cheese sandwich the other day and it was divine!

There are many much more qualified pickle makers out there posting their methods and recipes online, so I won’t get into specifics (unless you’d like them), but I will say that home preserving food is a heck of a lot easier than we had imagined it would be. No wonder people have been doing this since the days of old.

Here are a few shots taken of the process …

In a large saucepan, bring vinegar and water to a rolling boil.

While your pot is coming to a boil, cut your large peppers into rings or strips. Remove the stalks and seed pulp. You can leave small peppers whole (jalapenos, mini sweets). However, Scotch Bonnet peppers should be cleaned of stalks and seeds and sliced into quarters. All the peppers eventually taste pretty much the same after they have been jarred together.

Add the mixed peppers, garlic, onion, carrot and cauliflower to the boiling brine.

Boil for 5 minutes only.

Use slotted spoon to remove peppers and place in prepared and boil sterilized mason jars. Plan for about 6 large mason jars.

Pour the remaining vinegar / pepper brine into each jar leaving 1 inch airspace to the rim of the jar.

Slice the pickle cucumbers. The images above show me using whole pickles. These days I now slice them into strips with a mandolin because I find I can fit more into a jar and they are easier to serve when they are sliced.

Add the water, salt and vinegar to a pot and bring to a boil.

Break up the garlic bulb into individual cloves. Remove the skins. Slice each clove in half lengthwise. If the heart of the clove is greenish and sprouting remove it and discard.

Rinse the dill weed and arrange in to equal portions corresponding to the number of jars you have. Do the same with the garlic.

Add the portions of dill weed and garlic to boil sterilized mason jars.

Add the sliced pickle cucumbers to each jar. Press as many in to each jar as you can without crushing the fruit.

Pour the boiled vinegar-water-salt brine into each jar leaving 1 inch space to the rim of the jar.

Seal the jars with boil sterilized lids and place into a canning boil for 15 minutes for big jars or, 10 minutes for small jars.

Remove jars and let cool. The lids should snap down, you will hear them do this if you are in the same room. Once the jars are cooled, hand tighten the lids. They can become loosened by the vacuum created during cooling.

The experience was reminiscent of autumns of my youth, as I have fond memories of helping my mother make pickles. She and my dad would get bushels of tiny cucumbers and pearl onions in the fall and I was an eager helper at getting them all into jars. I do remember peeling all those tiny onions was a pain though, however have not ruled against pickled onions being featured in a post similar to this one next fall.

How about you … have you ever tried home preserving? Any memories of preserving going on in the kitchens of your childhood?

Thanks for checking out my blog. Happy Friday to you!
xo loulou

These stories were linked to.
The Joy of Discovering that Something is Easier than You Thought it Wo... 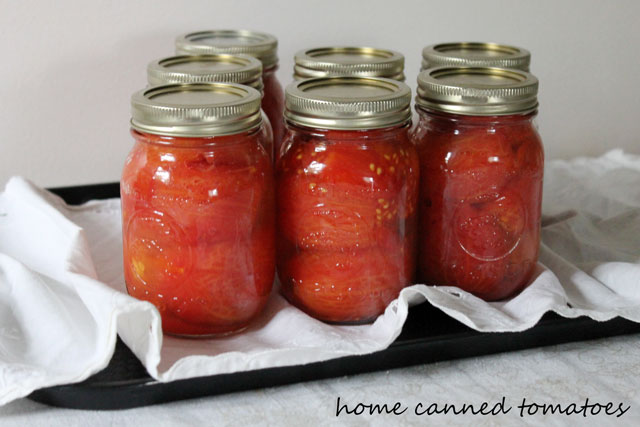 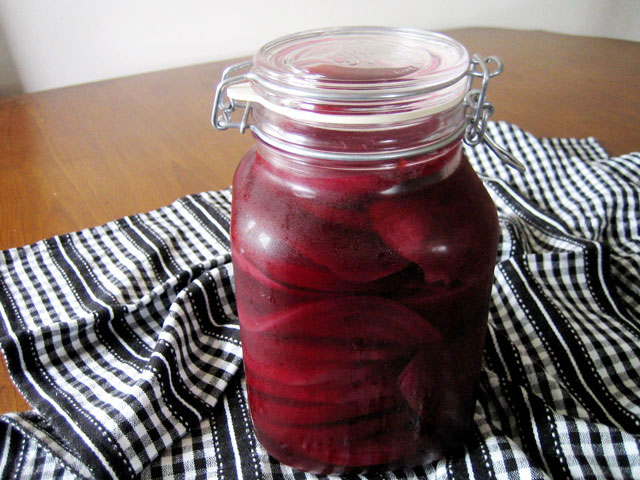