A Memorable Night at the Movies : The Open Roof Festival

Given all the fun things there are to do in the summertime, you might think it unlikely that a midweek evening at the movies could be an outing that you look back upon as having been one of the highlights of the season. However, if that movie-night was spent at the Open Roof Festival, I believe you’d feel just that.

This festival, now in its ninth year, is Toronto’s only outdoor event that offers a live performance by a local band, followed by the screening of a movie created by an independent filmmaker. There is also good beer and wine and delicious food served, all brought to you amidst a warm and friendly vibe.

Almost entirely volunteer-driven, the Open Roof Festival is not-for-profit, with proceeds going towards Canada’s independent film production and music communities. This year, the gatherings were held on Wednesday evenings, in an empty lot on Sterling Road in the Junction neighbourhood. This year the festival ran from mid-June and will end with one more installment to come, next week on August 22nd.

My friend Julie and I had the pleasure of attending this week and had a really good time.

Oh, and I haven’t mentioned that dogs are welcome at Open Roof!

The film we saw was Wes Anderson’s “Isle of Dogs”, so I’m not sure if there were more dogs in the audience thanks to the choice of movies, or if this was normal, but we couldn’t get over all the cute dogs that were there, ranging in size and breed! We spotted one tiny enough to be carried in the front pocket of a woman’s jacket and one so large that he resembled a big fluffy white bear.

While Julie and I are cat lovers at heart, we certainly understand the appeal of canine friends!

When movie time arrived, small blankets and rugs were laid on the ground all around, and the dogs settled in and watched along with us. Everyone laughed when the soundtrack became surround-sound, when they sporadically began a chorus of small barks, as though they were calling out to one another, “Hey, are you having fun? I am. Yup, me too“.

But I’m getting ahead of myself here … before the film, there was a concert by the talented four-person band “Goosebump“, along with socializing, food and drinks!

↑ Check out Goosebump’s video for “Heather’s Invitation” here and I think you’ll agree that the video is why this particular band was chosen to proceed “Isle of Dogs”! ↑

↑ There was a table and representatives from an organization called “Save our Scruff“, who : “By working with committed volunteers, foster homes, veterinarians, and trainers, are able to rescue dogs and provide them with loving temporary care while finding them well-matched, carefully screened forever homes.” ↑

↑ The black dog was adopted via “Save Our Scruff” earlier this summer. ↑

↑ This lovely smiley female is named Cassanova and is available for adoption right now! If you’re looking to add to your family, consider her or one of her friends, all found on their website linked above. ↑

↑ The Drake Catering had a food-stand set up, where we got a Fried Chicken sandwich served with Kimchi and mayonnaise, which was delicious. ↑

There was also a concession stand offering the usual movie fair including freshly made popcorn, candy and pop.

↑ The lot is right beside the soon to be opening Museum of Contemporary Art, which Julie and I are very excited about! It was also across the street from the venue of the Banksy exhibition. ↑

↑ Taken by Julie with her phone.↑

↑ I mentioned that a friendly vibe permeated the environment … Dina, who was seated behind us and kindly saved our spots while we went to grab a drink refill, was amoungst those who gave that impression. ↑

↑ This five week old pup, Charlie, would not let us pass without first saying hello. ↑

↑ One of the regular sponsors of the event is Amsterdam Brewery, who were there with some kegs. I had the “3-Speed lager” which was just right on that warm summer night. There was also wine available, which is what Julie had. ↑

↑ Watching “Isle of Dogs”. I plan on seeing it again because it is so well done. ↑

I hope my photos do a good job at showing you just how enjoyable this festival is. As previously stated, there is one more “Open Roof Festival” event to go this year, next Wednesday, August 22nd, when the band will be “Omhouse” and the film “Sorry to Bother You“. Tickets can be bought in advance here, so you can be sure to get a spot. If any are still available, tickets can also be purchased there.

These stories were linked to.
The Banksy Art Exhibition and Lunch with Julie 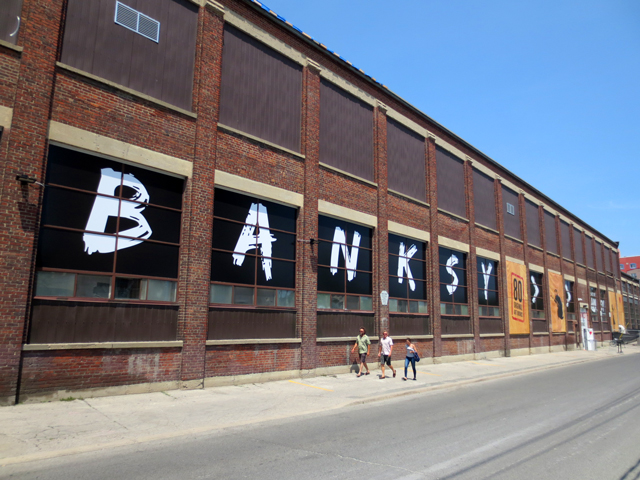