Ice Breakers is another new-to-Toronto public art installation, intended to get people outside during the cold winter months. Like the “Toronto Light Festival” in the Distillery District, (which I wrote about last week, in this post), 2018 was the second year for this exhibition.

Having seen both now, I’m surely hoping there will be a third year, a fourth year, and so on, for both shows. During a season when instincts strongly urge one to stay indoors, getting out to see some art has been quite lovely. Cold? Yes. But, also lovely.

There are five interactive installations set up along the waterfront, between Bathurst and York Street. Three were created by Canadians, one by artists from Portugal, and one from China. They will be there until March 18th (the original run was extended).

After a few abnormally warm days, all the snow has melted — I wish we’d gone before that happened, because, no doubt, these pieces were intended to be displayed under snowy conditions. They must have been extra nice against a clean white backdrop.

The show was still good without snow, though. As an adult, seeing them was interesting and fun, however, I bet children must really love these. With March break next week, if you have kids, you might want to take them down for a look. If you do go, you’ll want to bundle up as the proximity to the water makes it quite frosty down there. Also, I suggest you wear boots that you don’t mind getting dirty because it was pretty mucky around a couple of the displays.

We went on Saturday, walking eastward from the foot of Bathurst Street. I was surprised by how few people were down there, in contrast to the crowds encountered every time I’ve been on a weekend day during the summer.

A trip to the waterfront comes with the added benefit of visiting one of Toronto’s prettiest places! It’s hard to be blue while surrounded by so much blue. (My profound thought for the day, haha.)

↑ These “Longtailed Ducks”, aka Oldsquaws, were charming to watch. This is the single picture I got (which is of a male) because they kept disappearing for long swims deep under the water, moments after surfacing. It wasn’t surprising to find them categorized under the heading Diving Ducks. ↑

↑ The “Courante” section of The Music Garden. ↑

↑ Looking back towards the historic Canada Malting Silos. ↑

Described as : Ensemble merges architecture, music and astronomy to explore the dialogue between humans and the urban environment. The installation is inspired by wind chimes, which visitors can touch to create beautiful abstract compositions and ever-changing soundscapes.

↑ The “Spadina Quay Wetland”, Toronto’s urban wildlife sanctuary was brought back to life after a parking lot was torn down and a natural environment reinstated. On that day it was busy with chirping Starlings and Sparrows. ↑

↑ There’s a fish habitat hiding beneath that curved deck (called a Wave Deck), complete with rocks and logs bolted into place, specifically designed to nurture the fish species that have inhabited this part of Lake Ontario since long before the city of Toronto existed. ↑

Installation : Through the Eyes of the Bear, by Tanya Goertzen from Calgary, Canada. Location: HTO Park West

Described as : Inspired by Ursa Major or the Great Bear constellation, this installation uses renewable, recyclable and compostable materials to ask visitors to consider how humans interact with nature, or to see the world through the eyes of a bear.

↑ Visitors were invited to literally look through the eyes of the bear. ↑

Described as : a series of rotated fan-sculptures that collectively form a circulation playscape for winter exploration. In the spirit of the competition’s theme, ‘constellations’, Winter FanFare deploys individual fan-sculptures to create clusters of pockets where the public can meander through or run in and around.

Described as : an installation made from 90 painted bamboo poles freely arranged to form a framework in an abstract cubic shape. Like the constellations, the cube as a shape only comes into existence within our heads. Black Bamboo is accessible and invites visitors to walk or climb through it.

↑ Visitors were welcome to walk through the sculpture or climb it. We opted for the walk though! ↑

↑ The “sparkly light flare” look to some of the shots I took that day was thanks to a speck of dust on the lens, although it looks like I’ve used a filter. Fun fact, back in the days before digital photography, I had this bracket thing that screwed onto the front of my camera lens, into which you’d slide various filters, to give different effects. It being a film camera, you never knew how the shot would turn out until it was developed. I still have my old gear. I should pull it out and give it a go. ↑

By this point, we decided it was time to turn back and go home. So, we missed the final installation, ‘Root Cabin’ by Liz Wreford and Peter Sampson, Public City Architecture (Winnipeg, Canada) Location: We Brew Cafe, Harbourfront Centre. Described as : Like a constellation, Root Cabin is a mystery waiting to be discovered. Coloured cuts of wood can be seen through gaps in an alluring pile of weathered roots. When further explored by a visitor, the colours reveal a void that can be inhabited, and an iconic, nostalgic form of Canadian dwelling emerges.

One more look at the water, before we part …

Thank you very much for taking a look. I hope you have a great weekend,
xo loulou

These stories were linked to.
Beautiful Lights on a Dark Winter’s Night : The Toronto Light F... 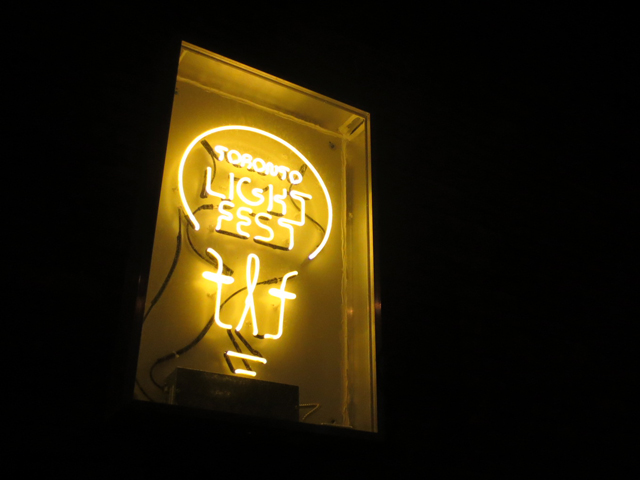