Back in June, I wrote about having found a great new shop to buy seedlings, specifically flowers to brighten up our deck area. (That original story is here.) After feeling somewhat colour deprived last summer, I decided to get into planting more annuals (those are plants that only bloom one summer, at least here in Toronto) in pots, that I could move around to change things up depending on what was looking good at any given time.

I might have gotten a little over-excited after seeing the very wide selection of plants they had on offer and ended up getting 15 different types of flowers. Each was only about $1 to $2 a pop so my floral extravaganza didn’t break the bank and they certainly have offered their fare share of pleasure.

I wanted to give the plants a bit of time to take root and grow before writing about the varieties I chose, and that is what I’m here to do today.

Of course, it is too late to start these plants this late into the summer, but this might give you an idea of what you might plant in pots in your outdoor space next year.

There was a three way prize for the ‘Best Surprise‘ based on the fact that the original seedling didn’t give much of a hint as to what was to come.

I actually thought this one was going to be a dud, as it did very little for the first month after I put it in a pot. Then, as if overnight, it filled with buds and the next day was covered in a whole bunch of very pretty light purple flowers. They lasted about 2 weeks and faded away. Now it is flowering again but with fewer blooms. It’s still very pretty though.

This plant had a couple of flowers on it when I brought it home, and then a couple more formed. Nothing spectacular and actually a bit shabby looking. I moved it to the back of the display. But then last week I noticed a good 7 new buds ready to bloom, and they opened all at the same time. They are in full force right now.

The tag indicated that there might be some other colours of flowers, aside from the creamy white ones, but no luck on that. That’s ok with me though because I like the white.

I had absolutely no idea what to expect from this plant, that looked very much like a succulent. I’ve been pleased with the tiny rose-like flowers in a wide range of colours. Each only blooms for one or two days and there have only been one or two in flower at a time, but it has been very consistent, constantly ready with another bud waiting in the wings.

The prize for the ‘Hardest Worker‘ definitely goes to this frothy plant covered in tiny blue flowers. It hasn’t stopped blooming thickly since I got it, and shows no signs of stopping. It’s such a pretty colour.

There’s a two way tie for ‘Level of Charm’ going to a couple of fun plants with the cuteness factor in spades.

Four tiny seedlings came in the original pan, and two died immediately, which was a little disappointing. But any disappointment subsided when the remaining ones began to bloom. Each flower lasted for at least a month before I had to snip them off, and right now there is a new bud ready to open.

It’s hard not to love a daisy and these white and yellow ones were quintessential samples. They look so much like the daisies that grew wild at a place I spent summers at as a child, that I wonder if this plant will survive the winter if I plant it into the garden in the fall. I’ll give it a try and get back to you in the spring.

As for the flowers on this plant, it started off with a boom – plenty of big (about 1 and 1/2 inches across) flowers, and has dwindled down to a few tiny ones. So I guess its grand hurrah has come and gone.

Next are a few plants I’ve had before …

Fuchsia is one of the flowering annuals I’ve had pretty much every summer for the past several years. I love the dramatic two-coloured flowers.

The one I got this year (and the only choice I had when I went shopping) is one that stands up, rather than hangs like the ones I’ve had before. It is pretty and has plenty of flowers, but I kind of miss the drooping down variety.

Over the years I’ve had mixed success with Snapdragons. Some years they do very well and others, like last year, they give up very early in the season. But no matter, I’ll usually lay down my dollar for a four-pack of them. I just can’t resist their little dragon faces.

These ones, which included yellow and orange, some colours I’ve not had before, fall somewhere in the middle, with the pink ones still looking like they’ll continue going, but the yellow and orange flowered quickly with no signs of blooms yet to come, though the greenery still looks lush and healthy.

These little flowers are in the same family as carnations. They remind me of a beloved neighbour I had growing up so, while they aren’t amazingly prolific in the blooming deparment, I always try to get some every year.

The prize for the ‘Most Interesting Foliage‘ goes to the …

While I have looked for a Nasturtium every spring for as long as I’ve been planting things outside, I’ve never been able to get my hands on one. I’ve always been very curious about the fact that you can eat the leaves and flowers of this plant.

So far, I’ve only had one flower on my plant, with a second small bud that might bloom, but the flat round variegated leaves are beautiful. So even if there are no more flowers, I’ll try it again next year.

I haven’t tasted it as of yet.

The prize for ‘Seen Everywhere But Still Wonderful‘ goes to the …

I love these and don’t know why I haven’t been planting them in our shady yard forever. I bought two 4-seedling-packs and put them into two large pots, where they have done very well with continuous flowering and lots of buds.

Not only does this succulent have a very cute name, they are also one of the few succulents that we are able to keep alive over winter here in Canada. They get their name because the main flower is like the hen and the offshoots are the chicks. The chicks eventually grow to become hens themselves.

Usually the hens get a surprise growing spurt and shoot up the middle and flower with multiple pink flowers. Then they die. I’m not sure if mine will do that in its first year; I’ll let you know later if it does.

I’ve had a big vibrant patch of Lavender growing since the second summer we lived here. I always counted on it to come up every spring without doubt. But this last spring, it looked very much like it didn’t make it through the winter, so I bought a replacement plant. But the original patch has bounced back a bit, and this new plant will nicely fill it out again once I transfer it from its pot on the deck into the ground in the fall.

So that’s it. If you were counting along, you might have noticed that I am two plants short of the 15 I got. That’s because two plants didn’t make it. I’m pretty certain it was because I put them directly into the ground (rather than pots) and I chose spots that didn’t get enough sun. So I don’t blame the Cosmos and Morning Glories for packing it in. The Morning Glories actually have leaves but no flowers, and a look around the neighbourhood tells me that there should be flowers by now.

Thanks a lot for taking a look. I hope this inspires you to try planting some new-to-you flowers next spring.
xo loulou

These stories were linked to.
Shopping for Flowers for the Deck and Garden : Shaw Flowers and Gifts 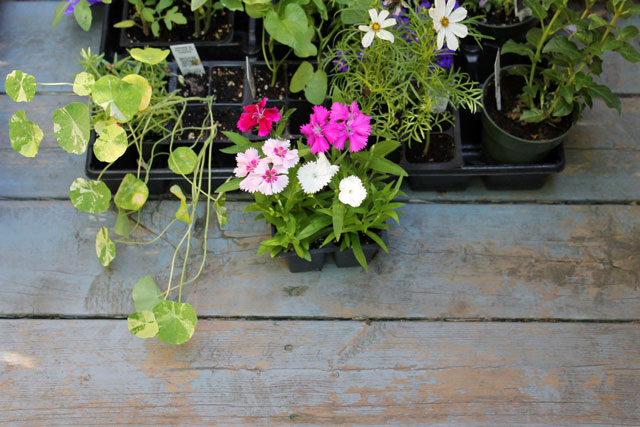