The Case of the Rose Bush That Knew Better

We first moved into our home in the month of October, which meant that anything blooming in the garden had done its thing and we were left with leaf raking and trimming back all that had been allowed to grow wild by the previous inhabitants, who had thrown in the shovel so to speak, when they knew they were moving out.

The yard was surrounded by a chain link fence that must have been the original one put up when the house was built in the early 80s. It was all busted and definitely needed to be replaced. Let’s just say we didn’t choose the house based on the beauty of the outdoor space.

In fact, it was such a mess, requiring so much elbow grease that we even received a nasty note from someone who apparently walked by our place on a regular basis and couldn’t believe the state of the yard! (Boo to the type of people who send notes like that. See a picture of the note in this post. Sheesh, we had barely moved in when Grumpy-Pants sent it!)

Anyway, the place was what would be called a ‘fixer-upper’ and one thing that needed fixing come springtime was that old unsightly fence. Growing alongside it was the thorniest scratchiest rose bush ever, which reached over towards the front door. It was almost impossible to get by it without being pricked. Not the friendliest of welcomes to anyone coming by to visit. I felt that it just had to go.

So, in getting ready for the replacement of the fence, I cut that rose bush down to the nub. I was ruthless. After cutting and cutting and being pricked more than once, right through my garden gloves, I was left with a gnarly stump. It had (and still does) part of the old chain link fence embedded right within it. The bush must have been planted around the same time that the fence was put up and then over the years the two melded together.

But there was still so much growing energy left in that stump that it immediately began to send out new growth. Which I cut to the quick again.

I knew I should have rented some sort of heavy duty garden digger thing designed to take out stumps, but there was no time for that as the fence builders were scheduled to begin work.

Then I got distracted by other home things that needed doing and just let the rose bush grow, steering the thorny branches away from the door, and then tying them all tightly in the fall. Note that at this point I had not seen what the flowers on it looked like yet.

The next June the regrowth gave me one rose. It was the loveliest of pale pink, and the aroma was the perfect rosy scent. Ok, I decided, the bush-that-wouldn’t-die could stay.

Fast forward a decade and this wild beast of a plant and I have made peace, and I thank goodness that this rambling rose knew better than I did. It was aware of its own ability and foresaw that I would one day grow to admire and treasure it. These days, its long canes wrap halfway around the yard and the roses it produces make for a breathtaking show. When it is in bloom from mid June until mid July, I often look out the window and see people stopping to admire it. It is that pretty. (I am not bragging here, as I’ve done nothing to cause this except keep it trimmed and tied.)

On my regular walks about in the neighbourhood I see that there are many rose bushes in bloom right now. There are plenty of red, deep pink and orange ones in flower, but I have yet to see a single other one with flowers the delicate colour of these.

Here are some stabby trimmings I had to cut back so I brought them inside, along with some yarrow that also needed to be reduced a bit as it was blocking the walkway. They are displayed in a vase my sister thrifted for me ages ago, that is marked West Germany on the bottom. So the vase was made before the Berlin wall came down, making it almost as old as the bush that bore the roses. The table is one that Nick and I came upon put out in someone’s trash a couple of years ago. He repaired some bending in it as best he could and painted it with the gray paint. It’s very light and handy for many uses so was a good find. It also becomes our bar-cart when guests come over.

Here’s to the longevity of old things, right?

It has been nearly impossible to get anything done on the computer over the past day because the internet has been down. I am not complaining though, because there are many in much worse situations than the simple hardship of having no internet in Toronto today, because yesterday we had the rain storm to beat all storms, with the most rainfall ever recorded.

The storm took out the subway train yesterday evening, just as most people were heading home from work, causing them to rely on shuttle buses and turning what would normally be a half hour commute to at least three hours. We lost electricity for long periods on and off in our area, but there are others around the city who are now going on 24 hours and counting without it at all. There are many water filled basements to deal with and major car damage caused by the flooding in some areas. It is quite dire and my thoughts are with anyone struggling in the aftermath of this storm.

These stories were linked to.
Wild Flowers or Weeds? 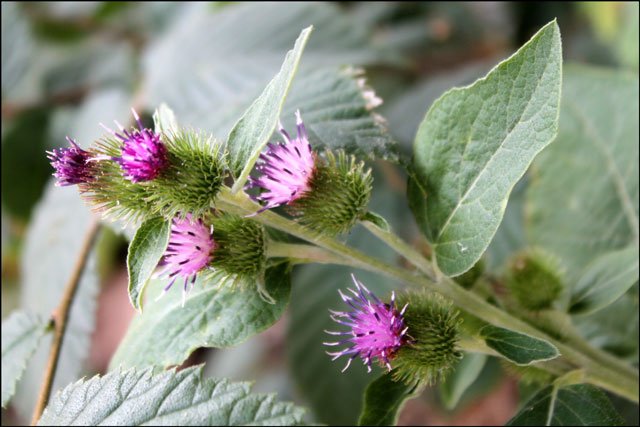