How Much is That Doggie in the Window?

Ever since coming upon this dog in a store window while out walking on Queen Street West yesterday, that silly song has been going through my head. Of course, he wasn’t for sale but was rather a cute little shop dog who had found the perfect spot from which to watch the world go by.

Do you know that song though? You probably do, at least the first chorus. But have you ever listened to the whole thing? I did this morning and was surprised to find there were so many versus to it. The lyrics are worth a listen and the vintage video to go along with it is fun. [You can find it on Youtube here, but if the link doesn’t work for you, a quick Google of the term ‘Doggie in the Window Patti Page’ should bring you right to it.]

Sung by Patti Page, it was released in January of 1953, and it surprisingly became a huge hit. In fact, it spent a whopping 8 weeks at number 1 on the US Billboard Magazine chart, and went on to sell over 2 million copies. Quite a feat for a novelty song. Just goes to show how dramatically tastes in music have changed in 61 years!

The part about its history that I found most interesting is that the idea of buying a puppy from a store, rather than from a registered breeder or a shelter, became outdated over the years as these dogs very likely come from puppy mills which are now seen as dens of cruelty to animals.

As the truth about puppy mills was revealed Patti Page became very concerned about the female dogs being forced to have so many dogs, and instead began encouraging people to get a dog from a shelter rather than buy it out of a window. In 2009 she rewrote the song with the title ‘Do You See That Doggie in the Shelter’. She has been quoted as saying “The original song asks the question: ‘How much is that doggie in the window?’ Today, the answer is ‘too much.’ And I don’t just mean the price tag on the puppies in pet stores. The real cost is in the suffering of the mother dogs back at the puppy mill. That’s where most pet store puppies come from. And that kind of cruelty is too high a price to pay.”

After she died on New Year’s Day last year, the Humane Society stated on their website that she would be remembered for her compassion for animals.

(I found this information on wikipedia here.)

On a related note, my parents’ dog Kiki is a Deer Chihuahua and is a rescued former puppy mill mama, who was abandoned after she was no longer useful in that role. We’re not sure how many times she has given birth but the vet thinks it was a lot. She’s living the good life now though!

Thanks for checking out this week’s pet related post. I hope you’re having a good Saturday. Here it has been dark and drizzly all day long, so we’re sticking around the home-front.

These stories were linked to.
Caturday Goes to the Dogs : Here’s Kiki! 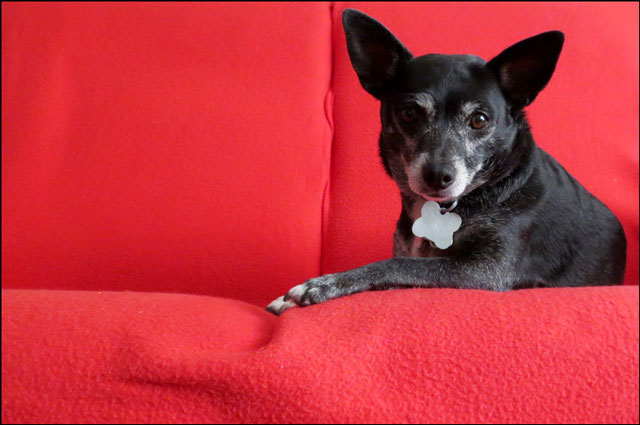