Here’s a little look at what Valentine’s Day looked like at our place this year.

To fill in new visitors, we’ve been together for a long time now. After meeting on a blind date we got engaged in February, 15 years ago, and were married the following November. So, we’ve seen a wide range of ways of celebrating Valentine’s Day together over time. We like it and always do something, with some years being fancier than others. This year was one of the more low-key ones.

It’s an official holiday here this weekend in addition to Valentine’s, called Family Day, so it’s a three day weekend.

My morning coffee was served in a cup with hearts on it, but I can’t say if this was purposeful because that cup has been in regular rotation since I got it last year.

Aside: we have successfully weaned ourselves from taking sugar in our coffee! I was told that if you just reduced the amount used over a couple of weeks, eventually you get used to not having it. I was very skeptical during the first few days and doubted I could enjoy coffee without sugar, but it really does work. Well, I should be honest and say that we are still having a teeny bit in our cup, but the amount has been reduced significantly. I used to like it sweet and took a rounded teaspoon (more like 2 teaspoons), but now am happy with about 1/3 of a teaspoon. Drinking two cups a day, the difference is almost 3 1/2 teaspoons of sugar every day, or over 25 cups of sugar that I won’t be consuming this year. Whoaa, I’ve never done the math before! It was time for that change.

Eddie decided to stay in bed for a while after we got up. We all love our red cotton flannel sheets. So cozy.

And after saying all that about sugar, now I am going to show you the small gifts we exchanged, including some sweets! Nick got these two small packages of candy for us to share, both of which came from a local bakery called Dufflet. We’ve had both of these before and really like them. There is some chocolate covered sponge toffee and some almond and pistachio brittle.

There was also a new-to-us kind of bubbly wine to try, this Santa Julia Organic Brut from Argentina, which we haven’t opened yet but have chilling in the fridge.

He also got me some Bath Bombs from Lush. I can’t wait to use them!

I got him this hot chocolate mix (from President’s Choice) that is made with actual dark chocolate shavings, and lists cocoa as its main ingredient. Of course we can and have made hot chocolate from scratch, but that’s something he wouldn’t do for himself, so I thought he’d enjoy this ‘next best’ option. We’re planning on enjoying some with some rum in it, to offset the ill-effects of the worse winter we’ve had in a very long time.

Decorations were minimal … I love this garland that I picked up this year at Christmas. Being red, I thought it was suitable for Valentine’s Day too so just left it up.

Poor Nick spent much of the day getting my computer fixed and by Saturday morning I was back online. (I fried the motherboard on Tuesday with a spark of static electricity.)

we spent some of the afternoon watching the Olympics.

Time in the kitchen involved making a salad to go with our vegetarian chili lunch. The salad was replete with a Valentine surprise which I’ll show you tomorrow. I also made some dessert to have after dinner.

Ed tucked into the fresh bowl of cat-grass I sprouted for him.

Dinner was not fancy but quite delicious.

As I mentioned, we kept things casual this year, but I usually do think to put on a decent shirt for dinner! Oops.

We made some crispy fish fillets using this method of pan frying it.

For dessert I used my grandmother’s recipe to make this Caramel Raisin Pudding. I’ve always loved this stuff, and now Nick does too. It’s not much to look at, but so good. I’ll post the recipe soon.

That about wraps it up.

Here’s to a day dedicated to showing your love and appreciation for friends, family, pets, boyfriends and spouses alike. I hope you had a good one.
xo loulou

These stories were linked to.
Pan Fried Fish with Crispy Panko Crust 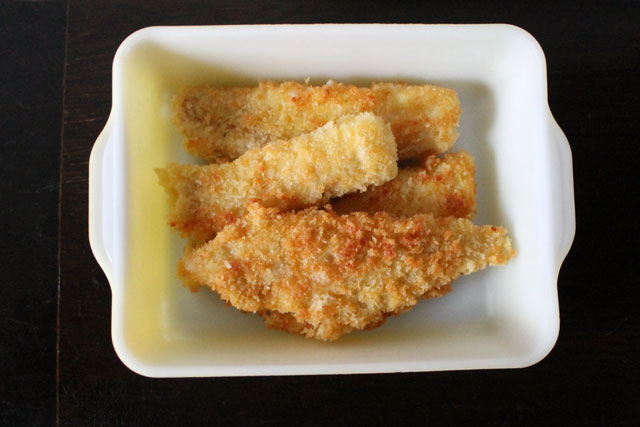