At the Art Gallery of Ontario in Toronto

As mentioned yesterday (here) I was at the AGO last week with my friend Meghan. She was on her lunch break and our main purpose was to see a special exhibit called ‘The Great Upheaval’. After we saw that show she had enough time to take a quick walk around a few more of the rooms and to go to the cafe.

Photography wasn’t allowed inside the special exhibit but here are some pictures of the rest of the visit.

Then she left and I hung out by myself for a while.

Most of my more recent visits to the gallery have been to see a specific show, after which I’ve looked around at a bit of the other art, but this time I had time to really check things out (The trip was during a period of having a busted computer, so there wasn’t much work I could get done without it so took the time look at some beautiful art.)

I began by finding the rooms that housed the oldest pieces. These examples were made in the 1600s. I find it quite amazing that the ostrich egg shells and the sea shells remain intact after more than 400 years, and that the tiny keys (which are not more than an inch long) were still there with the little ornate boxes they were made to lock up.

I was drawn to this next painting called ‘A View into a Hall with a Jester, a Girl and Her Dog’ by an artist named Gabriel Metsu from the Netherlands. It was painted in 1667, and was donated to the gallery in 1968 (so almost exactly 300 years later), given in memory of a woman named Mrs. W. Redelmeier.

This next series of photos features what I thought were interesting peeks at other people in the gallery.

As I talked about yesterday, I climbed a neat staircase in the gallery to the top floors, where I found myself basically alone with the exhibits, except for a security guard here and there.

In one huge room I found this series of works called ‘Armoury’. They were created by a group of three Canadian artists in 1984, who called themselves ‘General Idea’. The story about these three is an interesting one that can be read about here. These coats or armor featuring poodles were made for a performance piece they were staging called ‘Miss General Idea Pageant’.

As I said, I was quite alone, so took the opportunity to put my camera on the floor, set the 10 second timer and then dash across the huge room to pose with the art, to give it scale. The first couple of shots didn’t turn out, so I did that 3 times. I wonder what the security guard, who was standing outside the room and across a hall, but close enough to hear me running around in there, thought I was doing! ‘Oh, don’t mind me, just going for a jog at the gallery.’

This next piece, Iggy Fatuse, was created in 2007 by an artist named Janice Kerbel (you can read about her series here). I found it impressive that, although it looks like something printed by a machine, it is actually silk-screened by hand onto one huge piece of paper.

Thanks for dropping over. Wishing you a happy Friday evening and terrific weekend to come.
xo loulou

These stories were linked to.
The Cool Staircase at the AGO (Art Gallery of Ontario in Toronto) 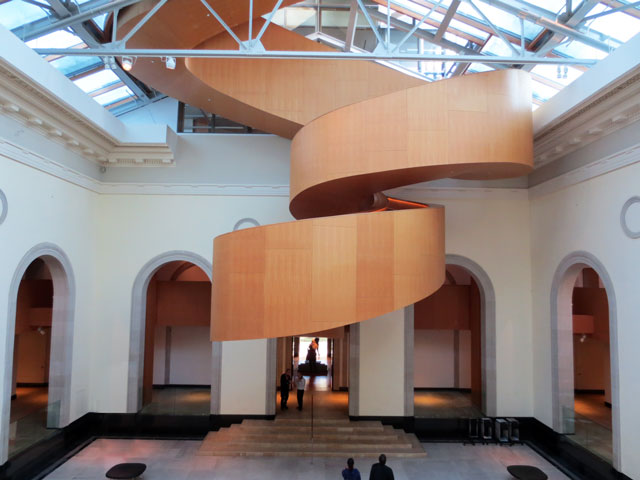