I lingered at the AGO after seeing the touring exhibit called “The Great Upheaval” with my friend Megan the other day. While, of course, there is a lot of excellent art to look at, there is also this stunning staircase to admire.

It was installed during the most recent renovation and expansion of the building, and which was revealed in 2008. As you see in the pictures, it is a curling wooden structure.

It’s no wonder that the staircase looks like a work of art in itself, as it was designed by famous architect Frank Gehry. While Gehry, based in Los Angeles, is thought of as an American architect, I found it interesting to read that he was born and lived right near the gallery in Toronto, until he was 18. But the work he did there, which includes other aspects of the renovation in addition to the staircase, was the first time he has ever designed anything located in Canada.

(I’ve previously shown you other components of the Gehry work at the gallery, including the Gallery Italia, where Meegs and I stopped to have a drink the other day, and neat curvy walkway at the entrance, seen in this post.)

Most visitors take the elevators up and down to the various floors, and the entrance to the spiral staircase was actually a challenge to find. After getting a bit lost, I asked someone where it was, and so made my way to the second floor and began my climb up the 138 steps.

The gallery is divided by the old original section that is two floors high on the north side, and the new tower that is 5 stories on the south side. This means that the staircase extends up through the glass ceiling of the old hall, and most of it is actually outside, encased in glass and running up the side of the upper floors.

↑ Looking east, just after passing up through the glass ceiling ↑

↑ Looking west over Chinatown. The smokestack is part of the Toronto Western Hospital on Bathurst Street at Dundas. ↑

↑ From inside the 4th floor of the gallery ↑

When designing the staircase, Gehry envisioned a romantically warm and intimate place, where people would fall in love.

Thank you for taking a look. I got a bunch of other photos of this trip to the gallery, which I’ll post tomorrow.
xo loulou

These stories were linked to.
A Visit to the Art Gallery 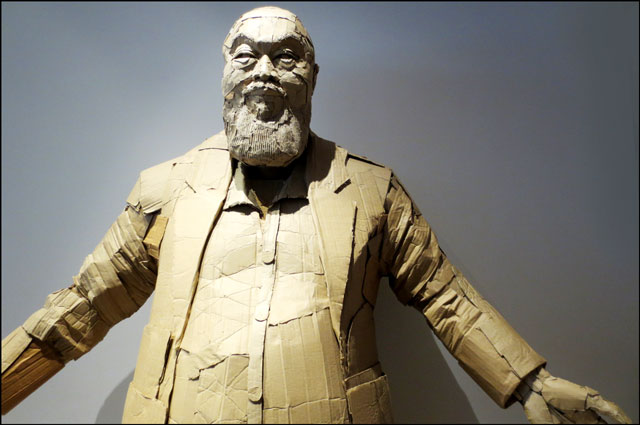