Last Thursday evening, being the first one in September, we had a great time at the art gallery for their First Thursdays event.

Since the theme is different for each one, no matter how many times you’ve been, these special parties are interesting and fun. This is proven by the fact that they always sell out well in advance! Clearly, this is something that people look forward to.

While we had planned to meet Meghan and her friend, due to confused instructions and my lack of cellphone, that didn’t happen — we were all there, but never found one another! However, we did happily run into our friends, Julie and Guy, who first introduced us to the First Thursdays (see our first time here).

This month the theme was Nostalgia Canadiana, and my numerous photos only capture a portion of what was being offered. There was so much to do and see that I can’t imagine anyone was able to do everything.

Of course, there was fantastic art everywhere : in addition to the AGO’s huge regular collection there was some art, including performance pieces, set up especially for the evening, and some exhibits on display for a limited time.

Something neat they do for these nights is take a selection of artworks out of the vaults. Apparently they have a collection of more than 20,000 works on paper kept in storage, which date back as far as the 13th century. We missed the introductory part of the talk on the pieces chosen by Associate Curator Georgiana Uhlyarik but I gathered the topic was female artists.

↑ That’s a lithograph by Vanessa Bell called The School Room. She was Virginia Wolf’s older sister. They came from a wealthy family but she chose to live a very bohemian alternative lifestyle for herself — for details check out the wiki page about her here.↑

We passed through another part of the gallery I’d never seen before, that being the Kids’ Gallery, designed for the enjoyment of children but containing “real” artworks. The current exhibit there is “Pets and Me” …

We lucked into catching something I loved — an exhibit of pen and ink pieces by Walter Trier [1890-1951]. I say we were lucky because this display only runs until September 13th. See details here …

This photo installation called “A line is not a line it is a violence”, by Felix Kalmenson was set up especially for this First Thursdays event …

We caught a special exhibit that runs until November 15th, called “Camera Atomica”. It is “the first substantial exhibition of nuclear photography to encompass the entire postwar period from the bombings of Hiroshima and Nagasaki in 1945 to the triple meltdown at Fukushima Daiichi in 2011”. See the details here.

It was certainly sad to look at but a very interesting exhibit.

Then there was the delicious and creatively prepared food, served at various stations. The portions are small and inexpensive, allowing you to try a few different things, which is a good thing because there’s a lot you’ll want to try. As I looked at my pictures after the fact, I couldn’t help but wish that I’d also tried some of this and some of that, including those awesome looking candy apples.

There are bars set up around the place, and you’re even allowed to have a drink in hand as you look at some of the art (although, with good reason, they try to keep the food and drink within designated areas and galleries).

↑ Julie and Guy had the Heirloom Carrot Frites ↑

Music also plays a large part in the First Thursdays events, with live DJs and musical performances by both bands and choirs. This month there was a concert featuring many Canadian musicians doing songs my the iconic Canadian band Rheostatics (which we missed seeing but were able to hear as we looked at stuff in areas adjacent to the stage). Personally, while I love live music, I’ve found that at these nights, I particularly enjoy the DJs. We had a great time listening to the choices of DJ Vanessa Dunn, who was in Galleria Italia.

They always offer the opportunity for people to create a bit of art themselves — this month they had tables set up with water colour paints and paper printed with a paint-by-number outline of a Canadian landscape.

↑ If someone had told me I would one day have a painting hanging at the AGO I wouldn’t have believed them, lol ↑

On top of all this, there was the opportunity for fantastic people watching — people tend to dress up for this event and it’s fun to see.

Before heading out we popped into a room with some modern art (which I forgot to get the info. on) and snapped some quick shots of us and our friends …

↑ This pose came at my request. We’re so happy for these dear people who will be welcoming their second child in December. ↑

Well, I have a number more photos that I could post, however, I’ll leave off now before I crash anyone’s computer due to image file overload!

If you too would like to check out next month’s First Thursdays at the AGO, it will be on October 1st. Tickets are on sale now, so get one before they sell out! The theme will be a “Pre-Nuit Sneak Preview” and early look at what is to come on what is probably my favourite night of the year, Nuit Blanche (which is on October 3rd this year)!

Thank you kindly for checking out my post.
xo loulou

These stories were linked to.
Good Times : First Thursdays at the Art Gallery 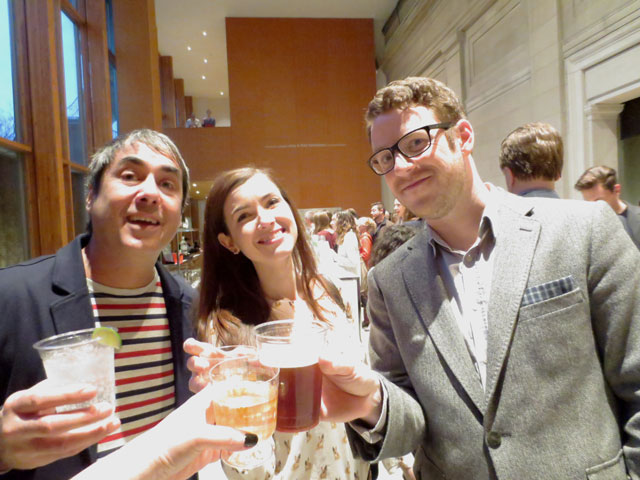