Overnight on Saturday there was a big art show here in Toronto called Nuit Blanche. This was the 8th year it has happened and the 5th time I’ve set out in the middle of the night to see what was out there.

I must admit that I suffer from ‘the-fear-of-missing-out’ where this event is concerned, and the times that I did choose my cozy bed instead of venturing out, I ended up with the distinct feeling of regret in the morning.

Those years that I didn’t go had a lot to do with my dislike of crowded places. While I love living in a busy city, I prefer to observe things from the outskirts of any large crowd. And I had found that there were too many people gathering around the displays for me to find the event fun.

So last year I thought I’d try a different tact. Rather than going out between midnight and 3am like I had before, this time I’d go to bed early and set my alarm clock for 4:00 in the morning. I tried to wake Nick up to come out but he decided to skip it. Then I very nearly just went back to sleep myself, but I rallied and went out by myself.

The weather was perfect and since the bar crowds had completely cleared away by that late hour, I was very nearly alone (except for all the security people, but they were discreet and in the shadows). The experience was very surreal and cool. (My pictures of last year are here).

This year I went with the same plan, and set the alarm for 3am. And this time Nick did get up and came with me.

There was a factor that changed this year versus last though, that kept it from being just as perfect, and that was the fact that the moment we stepped out the door, the gently misting rain turned to a full-on downpour.

I was wearing my (trusty but not so fashionable) pink rubber vintage 80s rain-jacket, so that kept my upper half dry, but it is really not nearly as charming traipsing through the streets in the wind and rain. But we were already up and out so we carried on. It did eventually stop raining, but not before our jeans and shoes had been soaked through.

There were 110 sites and we made it to 14 before deciding to call it a night. (Or should I say ‘morning’ because it was 5am?)

Many of the pieces had a sound and movement component to them, so they don’t translate that well to being photographed, but I think these shots give you a feel for what it was like.

In spite of the rain, I was glad we went. Will I be as willing to leave my nice dry bed if it’s raining on next year’s Nuit Blanche? That remains to be seen, but right now I think the answer will be yes. This only happens once a year after all, and I sure would hate to miss out.

Thanks for having a look and wishing you a good Monday,
loulou

These stories were linked to.
All Night Art Show : Nuit Blanche 2012 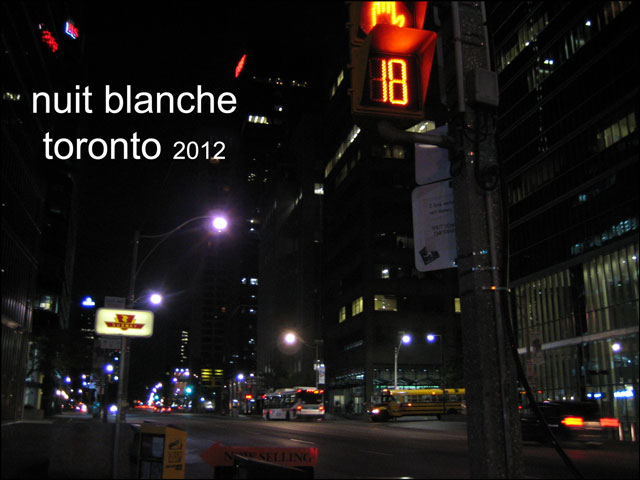