A week ago Saturday, my friend Meghan and I went to see some bands at The Phoenix Concert Theatre. The headliners, July Talk, are from Toronto. She had seen them before and wanted me to check them out, and had actually tried to get us some tickets to see them during the summer but they were sold out. Not only had that previous show sold out, but this one at The Phoenix, a relatively large venue, was also sold out. So, as you can imagine, I was very interested in hearing a local band that was filling up venues like that.

Other fans of live music may know otherwise (and I’d love to hear about it if you do), but I have not heard of a Toronto-based indie band doing so well in their own city, since Broken Social Scene and Metric broke, back in the late 90s. And even those bands had to live and/or tour extensively outside the city before they were embraced here. It seems that Toronto fans tend to wait to recognize the talent within their own midst, until people elsewhere do. July Talk, having formed a mere 2 years ago, has been an exception; the place was crammed with devoted fans. I woman I spoke to in the restrooms told me that this was her fourth time seeing them. Then she offered to lend me her red lipstick, (which I declined). I mention that part as an example of how happy and friendly the people were.

Something normal about going to see bands in non-stadium venues is that you never know when the show will start. The tickets always say when the doors open, (in this case 7pm), but that has little to do with actual showtimes. This means that you often find yourself standing around for a really long time before the concerts begin. As a result of this quirk, which is probably done so the venues who rely on drink sales will have more time to make those sales (with good reason), frequent show goers like ourselves tend to just automatically assume we can arrive at least 2 hours after the doors open, and still see everything. And yes, we have missed a few opening bands by doing this, but honestly, not very many.

This is all to say that we nearly missed the opening band this time, as we could hear them start their set as we were checking our coats at 8:45.

We were glad we hadn’t arrived any later, because this Vancouver-based band, The Gay Nineties, were great. We got to speak to the bass player later and he said they often perform in Toronto, so I’m looking forward to seeing them again when I’ll make sure Nick comes, because he will surely dig them too.

July Talk were very good too (clearly, based on what was written in my opening paragraphs!) …

Things wrapped up at The Phoenix at about midnight, and Meghan ordered us an Uber car. This was my first experience using Uber, and it was very good. The car was beautiful and the driver friendly and interesting. As he took us back to our Queen West neighbourhood, he told us about all the nightclubs he used to go to in the 80s, and where they were located. The conversation began after he mentioned that The Phoenix used to be a place called The Diamond Club. Meghan and I had noticed a fancy looking stone table enshrined up on the balcony, where we went between sets, and wondered about it. It must have been a remnant preserved from the disco days. (You can see it behind us in this shot).

We decided to stop off at The Bovine for a drink on our way home. They had live bands going on in the main room (and therefore a cover charge) so we headed upstairs to the Tiki Bar. There we heard some good music and chatted to the dj/bartender.

With the bands downstairs being the main draw that night, we had the place to ourselves, so took a few pictures. I wanted to get some shots of Meghan’s excellent mod-looking dress, that she had found at ShopGirls. It’s a place specializing in local design, with a motto ‘Shop your Shape, Not your Size’. I am looking forward to checking it out myself sometime.

Thank you for dropping over. Hope your final days of 2014 are good ones.
xo loulou

These stories were linked to.
Out to See a Band at The Bovine Sex Club 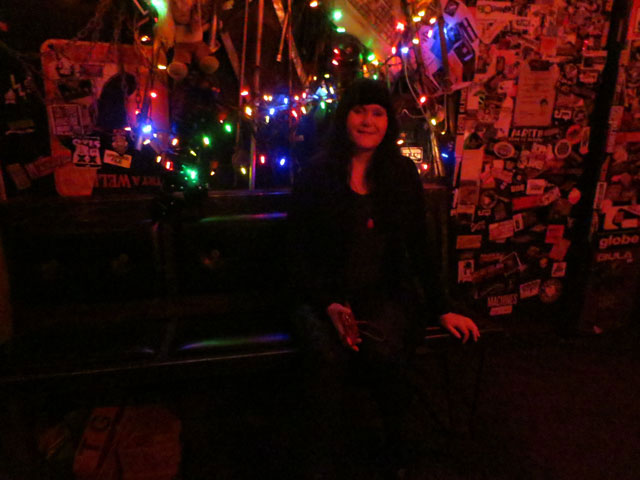