No Cars Equals a Good Look at the Buildings : Toronto Open Streets

The idea for an event where city streets are closed to cars and trucks, thus opening them up to people walking, biking and skating, was first born in Medellin, Colombia. Since then, Open Streets has been adopted in many cities around the world, Toronto being one of them.

Every city does their own version, but the goal is the same everywhere : to give residents in busy crowded environments the rare opportunity to walk or ride in the middle of streets which are normally clogged with traffic. Rather than the usual array of vendors and food trucks found at most festivals, during OpenStreets, the route is filled with Activity Hubs, where participants can opt to do things like dance, exercise, play a game, or listen to music.

In Toronto, participation involved the closing of Yonge Street, from Queen Street up to Bloor, and Bloor Street from Sherbourne to Christie, to traffic for four hours on two Sunday — this year they were August 20th and September 17th. Nick and I went both times, with our bikes. For the first one, I brought my camera and took these pictures, but for the second one, I left it at home, because, understandably, having to stop riding every block or so to take pictures, made the experience less fun for the person without the camera!

I fully intended to get this post up last week, but then got caught down a rabbit hole, poring over historic photographs at the City of Toronto Archives, finding old images of the places we’d passed on one of the city’s first streets, Yonge Street. In hindsight, I wish I’d looked at the historic pictures first and then gone and tried to take shots from the exact same vantage points, however, even though I did it the other way around, I got some good comparisons, now versus then.

No question, many of the old buildings along Yonge have been torn down and replaced during the past hundred years, but a good number of beautiful original structures still stand, some refurbished to their former glory and some looking worn and a little worse for wear. Regardless of the peeling paint, they’re still there though, which, in my opinion, is invaluable given a city that is changing dramatically by the second these days.

Beginning at the corner of Yonge and Queen …

↑ This great old picture of the intersection, taken in 1954, was shot from slightly south and further to the east than I was, however you can see what is The Bay today on the left (the southwest corner) and that rounded building north of that. The building on the right that the people are walking beside is also intact, but I didn’t get a picture of it. ↑

↑ Between Shuter and Dundas is the Ed Mirvish Theatre, which originally opened in 1920 as Pantages, later becoming The Imperial. ↑

↑ I turned slightly to my left and took this picture of Nick, waiting patiently for me. Dundas Square is to the north, behind him. He is approximately where the photographer of the next two historic shots stood. ↑

↑ At the corner of Gould. The new Ryerson University building is on the right. It’s what replaced the block where the Sam the Record Man had been for nearly 50 years. There was quite a fuss when that store closed, with upset over the loss of the iconic neon sign. From what I understand the sign was saved and is on display somewhere within Ryerson, but I have to check on that. ↑

↑ Approaching College Street, with College Park mall on the left. ↑

↑ Taken from slightly north of my photo above, in 1930. College Park, which was Eaton’s at the time, was in the process of being built. ↑

↑ Two decades after that, the subway tunnel under Yonge Street was installed. ↑

↑ This shot is dated “50-something” but it must have been a few years after the previous one, because the subway was finished and the streetcar tracks had been removed. ↑

↑ The historic building on the northwestern corner of College and Yonge was built in 1891-1892 for the “Independent Order of the Oddfellows”. ↑

↑ Did you notice this tower up there to the north, in the preceding pictures? This was “Fire Station Number 3”, built in 1872. It was decommissioned as a fire hall sometime in the late 40s. The old building has been demolished since, but thankfully the tower remains. ↑

The fancy building seen there on the corner (of Grenville and Yonge), was built around 1914. It was the “Dominion School of Telegraphy and Railroading”, where one could “train for good positions as telegraphers, station agents, freight and ticket clerks through day, evening or home study courses, Toronto, Canada.” [From Toronto Library Archives]

↑ Wondering what happened to it and why a McDonalds and Wine Rack occupy its former spot? Well, according to the archives, it burned in 1941. (It had been converted from a school to a furniture store by then.) You can see the fire hall building there on the right. ↑

↑ Backing up, here’s the oldest photo I have to show you, taken in 1912. It’s the same corner, Grenville and Yonge, just before the school was built. The fire hall would have already been there for forty years, however, sadly it was just beyond the border of the picture. It would have been neat to see it included. ↑

Carrying on, up the street …

↑ Turning and looking to the southwest (at St. Joseph). ↑

↑ Approaching Gloucester Street, where a historic building erected in 1888 for the Freemasons, has been recently retrofitted to create modern living spaces. In other words, it’s now a condo building — a really nice looking one called “Masonic Hall Lofts”. ↑

That’s the last of the historic shots I’ll include here, for if I continue my search, this post won’t be up until the snow flies!

From there we rode up to Yonge and Bloor, one of the city’s busiest intersections. It was fun to stand right in the middle of the street and watch the dancing in the street.

↑ The building on the right is the newly completed One Bloor East Condo. It’s the 6th tallest structure currently in the city and the second tallest residential building, beat out by the unmissable tall one seen on the left of some of my previous pictures (Aura, located at Gerrard and Yonge). ↑

↑ A guy had set up the photo-op asking cyclists to make it look like our wheels were the OOs in “Bloor”. ↑

↑ Some of the major through streets were still open to let car traffic through. Here we are at Avenue Road. ↑

↑ The was a piano set out in front of The Royal Conservatory of Music Building. ↑

↑ Looking back from just west of Bathurst – this is probably the last picture I ever take of Honest Ed’s, as it’s now closed, with the whole block destined to be rebuilt. ↑

We continued westward into Koreatown from there, however I’ll finish here since I posted about that part of the Open Streets Event last year, when I went with my friend Meghan. (You can here see that here, if you’d like.)

We both loved the chance to cycle freely on the street like that and agree, Open Streets should happen every Sunday!

These stories were linked to.
A Good Festival : Open Streets Toronto 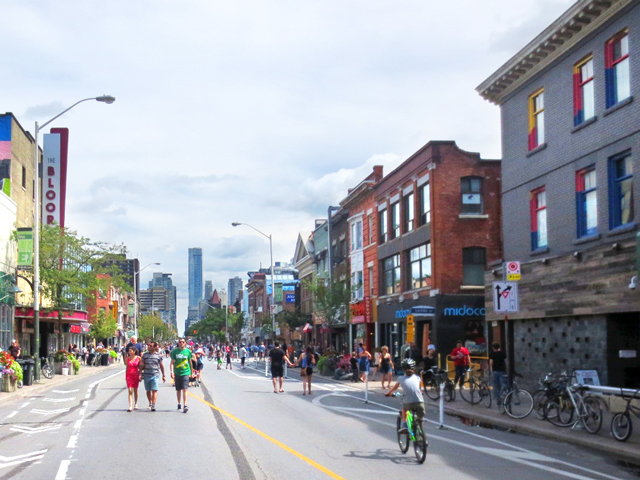