An Interesting Walk in Toronto – Part 1 : Including an Un-Mapped Path Near Fort York

Hello! In a nutshell, here is an interesting walk in Toronto, that begins at Bathurst Street and King Street West and ends back where you began. This is close to the TIFF Headquarters, worth mentioning as the festival begins tomorrow.

The walk takes about 45 minutes and has you travel through one of the city’s oldest neighbourhoods, over a newly built award winning bridge, along a mystery path surrounded by nature, over another bridge, this one historic and one of Toronto’s oldest, through an innovative and fun marketplace literally made up of shipping containers, and past a historic building that used to be where originally all of the city’s caskets were built but which is now being incorporated into a new condo development.

From King Street West, you go south on Bathurst Street to Wellington Street, where you turn right (westward). Walk along that until you hit the path that goes to the bridge, on your left hand side, past a green field/park. Turn left (southward) and take the path across the bridges. Go down the stairs and then go behind/under them, where you’ll find the entrance for the “Little Known” path, which will head eastward (toward the CN Tower).

Part of the walk is over ground that would be mucky when wet, with some uneven terrain, so, think about what shoes to wear. Also, I don’t believe there are lights along the un-mapped part, so you’d only want to go during daylight.

Back in early spring, I was taking a walk, heading over a relatively new bridge called “Garrison Crossing” that goes over two sets of train tracks. I’d walked it before, ending up on the grounds of Fort York.

But this time, I got curious and, at the bottom of the stairs at the end of the bridge, I turned and went under the stairs instead of going into the park. There, I discovered the entryway of an unmarked path, which ended up cutting through a stunning swath of beautiful wild flowers and mature indigenous tree growth.

This is right downtown, a short(ish) way from the popular corner of Bathurst Street and King Street West. Although the area is filled with people and housing, including historic homes and lots of new condo towers, I was the only person on this path and it felt like I’d found a secret place, quiet and peaceful, within this busy city of ours. And it smelled so good, too.

When I got home, I searched the internet but could find no mention of the path and it wasn’t marked on any of the map apps. I could slightly see it on the satellite image map but only because I was specifically looking for it.

So enchanted was I that I’ve since been back a few times, showing it to friends. And, most times, as we arrived at the entryway, we were asked by people if there was a way off the path at the other end, or if it was only one way. One woman said she’d lived in the area for years and had never walked it because she didn’t know where it ended.

Although, effort by someone (the city?) went into nicely paving it, the reason for its lack of use is that, after a 15 minute walk, it originally ended at an imposing chain-link fence, with no way out, so people had no choice but to walk all the way back to the beginning again. That’s fine if you’re walking for exercise with no destination in mind, but a hassle if you’re taking the path hoping to get somewhere else.

Today I am here to show you that someone has cut a large hole in that fence and you can now get through at the other end! This is not at all obvious from the street and would only be found if you were exploring.

Some photos, shown in the order they were taken …

↑ Looking eastward from the walkway leading to the new bridge ↑

↑ Garrison Crossing Bridge . There are two arches, each going over one of two sets of train tracks. ↑

↑ The second arch of the bridge ↑

↑ Formerly the site of “The Immigrant Sheds” ↑

↑ Under the stairs at the end of the bridge, viewing the beginning of the un-mapped “Little Known” path ↑

↑ There I am showing Stella where we’d be going. ↑

↑ About halfway along the path, looking back (westward) towards the beginning of the path and the condo development seen earlier. The path runs along the train tracks and the train in the photo was in motion. ↑

↑ Ta-daa, here’s the hole cut into the fence. That’s the historic bridge on Bathurst Street overhead. ↑

We continued through the hole and up the other side, but since there is so much to see on this walk, I’ll stop here and continue with Part 2 tomorrow — Update : Part 2 is found here.

Thanks for reading and happy walking!

These stories were linked to.
An Interesting Walk in Toronto – Part 2 : Including a Market Within ... 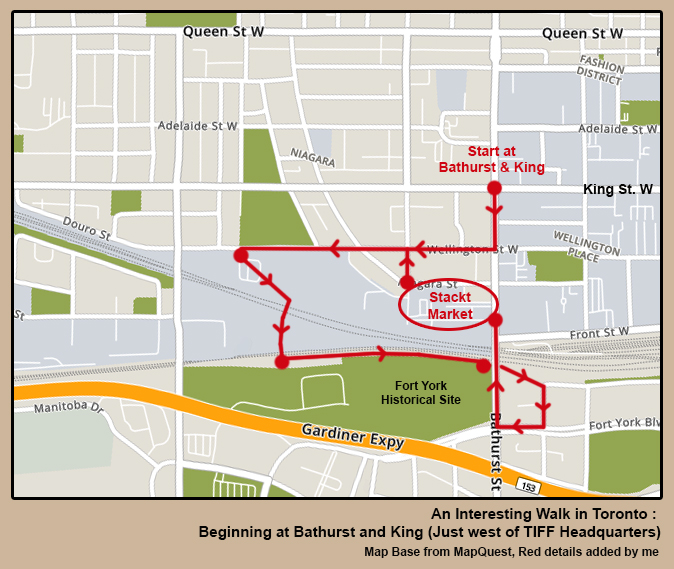