My last post was about our recent evening out at the “Just For Laughs SiriusXM Top Comic Finale”. It was held at The Winter Garden Theatre, located on the east side of Yonge, just north of Queen Street.

I saved the photos of the theatre to show you in a dedicated story about this remarkable venue.

The Winter Garden Theatre is situated on the 7th floor, over-top The Elgin Theatre, which was called “Loew’s Yonge Street Theatre” at the time they were built in 1913, as the flagship for Loew’s chain of Canadian vaudeville theatres. Today, they are last double-decker theatres remaining in the world.

Such stacked theatres allowed the actors to go up and down the stairs, appearing on the two separate stages, and thereby entertaining two audiences simultaneously.

The two theatres were decorated quite differently from one another, with The Elgin having a classic formal look with lots of gold-leaf and lush red velvet. In contract, The Winter Garden was given a … well … um … I won’t even try to describe it, and will let the photos do the talking.

So, these two theatres were built to present vaudeville performances, which were live shows that began in France at the end of the 1700s. A Vaudeville show in Canada would have been defined as “a series of separate, unrelated acts grouped together on a common bill. Types of acts included popular and classical musicians, singers, dancers, comedians, trained animals, magicians, ventriloquists, strongmen, female and male impersonators, acrobats, illustrated songs, jugglers, one-act plays or scenes from plays, athletes, lecturing celebrities and minstrels.”

But, as the Loew’s Yonge Street and Winter Garden Theatres were opening, in 1913/14, the vaudeville genre was fading as a popular form of entertainment, making way for motion pictures. So, a mere 14 fourteen years after it opened, The Winter Garden portion of the the complex was shut down in 1928. The Loew’s Yonge Street Theatre remained open, and changed its offering to movies only. The era of silent movies was coming to an end and films with sound had begun, so they wired it for sound and completely sealed up The Winter Garden Theatre.

And so it remained, through the decades, until the early 80s, when The Ontario Heritage Trust purchased the complex to restore both theatres for use as a performing arts stages.

When they cracked the seal to The Winter Garden Theatre, it was like entering a time-capsule.

I remember becoming so enchanted by the story as a young person, after watching a mini-documentary news segment that described the surprising discovery and the refurbishment. I’ve searched the web, trying to find the exact video I saw, but it aired before the internet and I have come up empty. I remember it vividly, though, so I know it existed! I have found some footage though, that discusses the theatres and the process here.

I recall learning that when they opened the place after not having been seen by anyone in over 50 years, they found that it was mostly still intact, however, the walls and surfaces were all black. I imagine this would have been a result of five decades of cigarette smoking going on in the theatre below it. The restorers cleaned off a small spot and discovered that the hand-painted walls remained under all the soot. They were able to clean the walls using lumps of raw bread dough, revealing the hand-painted water colour artwork beneath.

Also, thousands of branches of beech leaves were harvested, preserved, painted, fire-proofed and suspended from the ceiling, replacing the original ones that had crumbled.

What is believed to be the world’s largest collection of vaudeville scenery was found inside.

As for the lower theatre, which had been renamed “The Elgin” in 1978, it had been in constant use over the decades, so there was much more to do in these parts to restore them to their original states. 25 layers of paint were removed from the original surface in the lobby. In the theatre, opera boxes and plaster details were re-created after having been damaged or completely removed. Over 300,000 sheets of wafer-thin aluminum leaf were used to re-gild the walls and plaster details.

Time for picture, beginning as far back as I can go …

↑ The only very old historic photo of the theatre I could find, taken the same year The Winter Garden section was closed and sealed up. ↑

↑ I couldn’t help but go off on a tangent and research the film that was showing in the theatre at the time that historic photograph was taken. Gary Cooper was in a silent film called “Wolf Song”, with an actress named Lupe Vélez, released in 1929. This would have been one of the last silent films made, as the first talking ones had begun around the same time. It turns out that the two actors became romantically involved while making Wolf Song and this relationship culminated in Lupe bringing a pistol to a train station a couple of years later, and taking a shot at Gary. Apparently she was very fiery tempered and had been given the nickname Whoopee Lupe. ↑

↑ The only other old photo I could find that included the theatre, this one taken in 1935, looking north from just south of Queen Street. You can just see the Loew’s sign up there on the right. On the left is The Bay, which was Simpson’s at the time. The rounded building is also still there, as is the one with the Heintzman Piano sign painted on it.↑

↑ I guess this was an uneventful place, as so few photos of it were available to archive. The next one I could find was taken in 1973. Note that it was still called “Yonge” — It became The Elgin 5 years later in 1978. (Lord Elgin had been the Governor General of Canada in 1847.) It looks like the building is only a couple of stories high, but it’s taller in the back, where there are 7 stories and The Winter Garden Theatre. ↑

↑ Here’s one of the back of the building (on Victoria Street), taken around 1985. See the staircase? That was likely the one that the actors took up and down between the theatres, back in the vaudeville days. Today, as seen in the photo taken behind the theatre, near the stage door, in my last post, that wall is flat, with no indent for the stairs. Instead, this is where the back-stage elevator shaft is now — they cleverly and conveniently made use of the indented space to install that, and therefore didn’t have to open up the 7 floors to The Winter Garden.↑

↑ Here’s one taken in the mid 80s. The first step of changes to the building, after the government purchased it, were made in preparation for a two year run of Andrew Lloyd Weber’s “Cats”. This show is believed to have been the first to start Canada’s Musical Theatre scene. In order to prepare the theatre for this show, the renovation of the lobby had been done and The Elgin Theatre retrofitted. ↑

Then, after Cats ended its run in 1987, the whole building was closed down, for the full refurbishment, which was to take 2 years.

(I was curious about the restaurant “Diana Sweets” that was beside this building, in the very old 1929 photo and these more recent ones. It turns out that this place was that of Gus Boukydis, born in Sparta, Greece. He emigrated to Chicago in 1900 and began selling fruit and vegetables from a pushcart. He and his brothers eventually moved to London, Ontario then to Toronto, where, in 1912, they went into the candy making business. He opened the restaurant at 181 Yonge Street and, remembering the statue of Diana, goddess of the hunt, prominently on display in the town square back in Sparta, called it Diana Sweets. He eventually opened several others around town, and remained active in the business until 1960. He died nine years later in 1969, and is buried at the Mount Pleasant Cemetery; I got this information from their site.)

The theatre reopened in December 1989. It has stayed the same since, looking just like it did when it first began, over 100 years ago.

↑ I didn’t get any good photos of the exterior of the building when we were there the other day, so I’ve taken a couple of screen shots from Google Maps, so you can see what it looks like. ↑

↑ The awning/marquee is a newer thing, created in 1995, emulating what a typical one in 1913 would have looked like (but not arched like the original one of this particular theatre was). ↑

↑ Leading to The Elgin balcony (but we went right by this, on the way up to The Winter Garden). ↑

↑ A look at the arched windows in the front of the building. ↑

↑ There’s one of the vaudeville scenery backdrops, which were found inside The Winter Garden. ↑

↑ The leaves are real beech leaves which were preserved, painted and fire-proofed. The tree trunks hide the support beams. ↑

I think it’s safe to say that there is no other place quite like The Winter Garden Theatre! Thank you kindly for visiting it with us.
xo loulou

These stories were linked to.
So Many Laughs at Canada’s Top Comic Finale 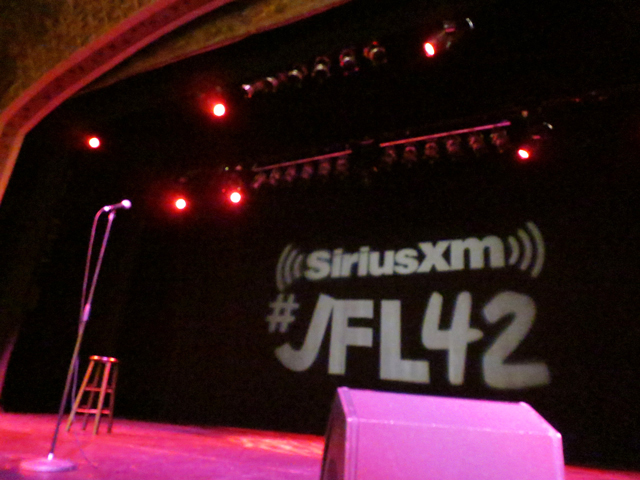