Necessity was the mother of invention where the making this Gate-Latch Fob was concerned, after I went out to the side-yard to empty the trash, wearing only my pyjamas and slippers. Suddenly a gust of wind caught the gate, slamming it shut and locking me out in public, on the wrong side of the tall fence.

Thank goodness Nick was home, although he was fast asleep when it happened, so it took a lot of doorbell ringing at the front door, in full view of passers-by, before I was let inside again. Things could have been worse and he could have already left for work, leaving me stranded outside in pjs, without a phone or a coin to put in a payphone, all day long. Even if I had had some money for the payphone, I would have had to walk to a very busy corner in inappropriate clothes and fluffy blue slippers.

So that very afternoon, I hung a hook, leftover from a stretched-out and ruined bungee cord, on that gate-latch and we’ve been using it ever since to ensure the same scenario never plays out again. It actually does double duty in that aside from allowing us to keep the latch open when we’re out beyond the gate, it also allows us to add a little more security to our deck area by locking the latch shut when we’re inside. Of course, being a hook it doesn’t completely lock the latch as would a padlock, but it would be very difficult for any prowler to get past it.

↑ hung to keep you from being locked out ↑

So, I recently decided to pretty up that old hook with some macrame. It took about an hour to do, and the addition has turned it into a kind of a door-pull too. Nick, who doesn’t often comment on things I make except to say they’re nice, made it a point to tell me the other day how much he liked this thing. It feels good in your hand.

Now, I’m not here thinking that loads of people have the same requirement for a Macramed Gate-Latch Fob, but since this is not the first time that I’ve lived in a home with a tall gate which could accidentally shut a person out on a windy day, I am thinking that there might be others out there who could use such a thing.

And if you don’t have need of something like this, the macrame knots I will show you in this project are ones that can be applied to other string projects, particularly a plant-hanger, which I’m planning to make and post about in the future.

The body of this Gate-Latch Fob is a tube formed by basic Macrame square-knots, with the knots being ‘alternating’ ones, meaning that for every second row you move two stings over. This is very well demonstrated in this instruction document on the subject of Macrame, published as part of the Project Gutenberg. Specifically, the 5th image down the page (including the header image) is the one that illustrates how to alternate your square knots.

(I also demonstrated the basic Macrame Square Knot in this post, where I showed you a toy I made for our cat Eddie. He still plays with that thing all the time. In my demonstration I noted a little rhyme I say to myself, in order to remember how to tie the square knot correctly … ‘Coming up from below, it’s his turn to go’. )

How to Make a Macrame Gate Fob :

Supplies – a hook from an old bungee cord, some twine

To make one that is about 7 inches long, cut 6 pieces of twine 36 inches long. Fold them in half and loop each piece onto the ring of the hook (that’s called a Lark’s Head Knot and is shown in the 4th image in the Project Gutenberg piece referred to above). This will give you 12 pieces of string to work with, each about 18 inches long.

Once you get to the end of your strings you will finish the piece by tying a Macrame Decorative Coil, as demonstrated in the image I prepared below. Note that this coil is only meant for a decoration and should not ever be used to bear weight, as it might not hold. When we use this Macrame knot later when making a pot holder for a hanging plant, there will be tight weight-bearing knots above this decorative feature.

To Make a Macrame Decorative Coil :

Cut a piece of string, the length of which will be determined by how long you want your coil (in other words, how many rings you want on it). For projects using regular twine, you will need a piece that is about a foot long.

Basically, you fold about 4 inches of twine down, and then wrap the twine tightly up and around the folded piece and all the pieces of twine hanging from your macrame project. When your coil is as long as you want it, pass the end of the twine through the loop formed by the fold. Then pull hard on the bottom end. This will cause the loop to drop down into the centre of the tightly wrapped coil, and hide it from view. Then you trim the ends (you can let the bottom end join the rest of the tassel if you want). The coil remains secure because the twine is folded over tightly inside, however, there is no actual knot which is why I call this ‘Decorative’ and not weight-bearing.

I hope this all makes sense. If something isn’t clear, please ask any questions in the comments.

These stories were linked to.
Tying a Basic Macrame Knot : DIY Cat Toy 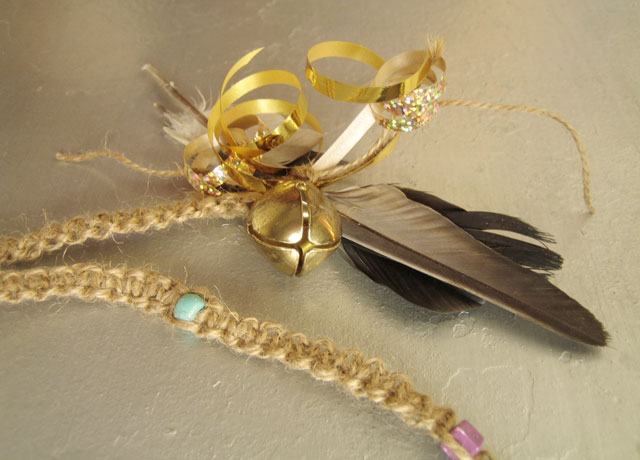