Cats on the Street

It’s pretty easy to get photos of dogs out and about on the streets, as seen in last week’s pet related post this, but I find that it is a lot more challenging to get a good shot of a cat. I can’t tell you how many times I’ve spotted one only to have it run away as soon as it sees me. I have tried to follow them but will only go so far, as I don’t want anyone catching me slinking around their yard.

So this ‘Cats on the Street’ post is limited to one live cat and some images of cats I’ve come upon lately.

(1) I’m glad I got a picture of this cat sticker above when I did, stopping and fumbling to get at my camera out as both my hands were occupied holding heavy grocery bags, because when I passed the spot again a few days later the sticker had been partially peeled off and ruined.

(2) Here are a tiger tee-shirt and a fleece blanket with kittens on it spotted in China Town. It is strange that they are also selling a USA souvenir shirt here in Toronto.

(3) This tattered ‘Lost Cat’ sign made me sad, although there is hope that the cat was found. Here’s a story about our now-dearly-departed cat Johnson. He was Nick’s cat before we met, and when we were in the process of moving in together, the cat got loose (he’d actually been put out by Nick’s unthinking former roommate, on the street side of the row-house they lived in, when the cat had only ever been out the back side before). So he got lost. Needless to say Nick was very upset by this and searched and searched for him. He put posters up but there was no news until at least a week later, when a shop owner happened to see the poster. She had found poor Johnson alone and scared in the back alley behind her store, which was located quite a way from where the cat lived. He must have been wandering around for a week. She had kindly gone to the trouble of bringing him to the Humane Society, which is located on the other side of town. So Nick took his cat carrier on the streetcar to go get him. Then Johnson became our cat and we all lived together for several years until he died of old age.

We sure loved old Johnsy and were very happy that the signs on the street had worked for us, and we hadn’t thought to offer a reward although Nick did bring that woman a nice gift to say thank you.

(6) And the aforementioned live cat!

Thanks for taking a look. I hope you’re having a good Caturday.
xo loulou

These stories were linked to.
Dog Spotting While Out and About 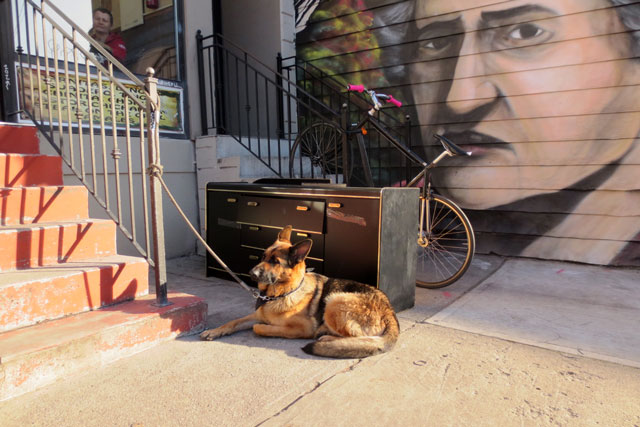