A Look at Fort York

These pictures were taken at the historic site Fort York, where you’ll find the oldest buildings still standing in Toronto, except for three log cabins and a lighthouse that are slightly older.

In the late 1700s, when this area was no more than a small trading post surrounded by forest, the fort was established by the British Army and Canadian Militia, to defend the area, then called York, from the United States.

The reason they chose this particular place for it was that there used to be a river running south, depositing into Lake Ontario at that spot, and the banks of the river provided natural protection. The river actually still runs today, however it’s now encased within a buried tunnel, something they did in the late 1800s because it had become very polluted.

I took these on the same afternoon that I went to the Aboriginal Pavilion that was held on the grounds. I got to the Pavilion by entering from Bathurst Street to the east of the fort, so had to walk through on my way to the exhibit that was located on the far west.

↑ This bridge was originally a draw-bridge that went over that now buried river. ↑

↑ Brick Magazine constructed in 1814 to keep ammunition but structural failure of the foundation forced them to convert it to a storehouse in 1824. ↑

↑ North Soldiers’ Barracks – This and a second similar barracks to the south were constructed in 1815. Both buildings housed 100 soldiers, wives, and children. ↑

I happened to pass by while a demonstration by the Fort York Drums and Squad was going on (which you can read about here if you’re interested).

On my way back through, after visiting the pavilion, the crowd at the fort had somewhat dissipated, to the point that I was nearly alone on the paths.

I could hear the faint but distinct sound of a lone fife being played somewhere. I followed my ears and found the source — a young man practicing while walking back and forth along the top of a hill.

Thanks for visiting my site. I hope you had a great weekend. We hung out enjoying the gorgeous weather, barbecued, and went to a great artisan market that I’ll tell you about in my next post.
xo loulou

These stories were linked to.
The Aboriginal Pavilion at Fort York 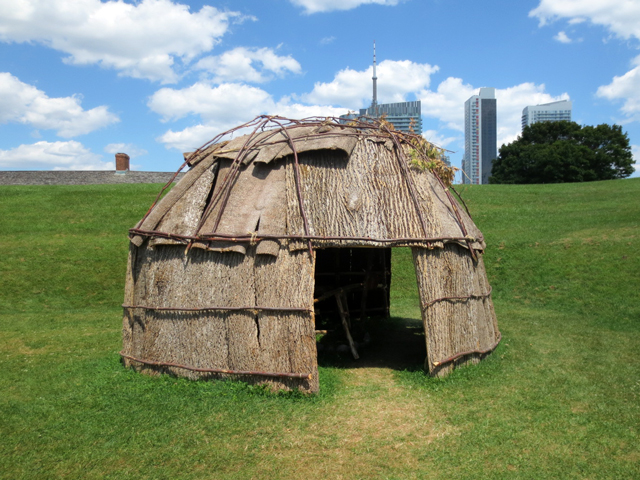