Coffee Date Confusion : I’ll take a Manicure with that Cuppuccino

My friend Nyla lives north of the Queen Street West neighbourhood in which I do. However, whenever we get together, we seem to do it down here rather than near her place. So to keep things fair, when we planned to get together for a coffee and a chat a week ago Saturday, I told her to pick the place and this time I’d travel to her.

And then, with no coercion on my part, she chose a place down by me! I guess the fact that she likes to come here is a testament to an area with a whole bunch of new and interesting places to check out, a result of the quick and dramatic changes brought about by the building boom in this part of the city.

Of course, I don’t mind at all as it’s pretty great being able to walk to meet her.

Our destination was a place that she’d seen from the outside but had not been too, called Her Majesty’s Pleasure located at 556 King Street West. I hadn’t been there either, and after she told me the address, for the life of me I couldn’t visualize where she meant. I’d been along that strip about a million times, but just couldn’t think of a cafe corresponding to that address, aside from a Starbucks on the other side of the street.

It turns out that was because this “cafe”, (which certainly looks like a cafe from the outside), is actually a spa. So, our coffee date morphed into a manicure for Nyla and an eyebrow tint for me.

I was first to arrive for our 1:30 meeting time, directly behind a large group of women, one of who was wearing a “Bride” sash and tiara. The party atmosphere of the place was apparent right off, as the ladies were handed a glass of bubbly and lead to a table bearing sandwiches and colourful macarons.

Her Majesty’s Pleasure is certainly not like any spa I’ve ever been to. Here, herbal teas and the soothing sounds of meandering brooks and chimes that usually accompany these types of places, were replaced by loud music and full-on cocktails, mixed by a resident bartender, all housed within a very pretty setting.

You enter through the cafe/bar area …

The nail and pedi area is to the right of that, and the treatment rooms are at the back …

↑ Nyla took this picture with her phone while we were there. ↑

Nyla’s manicure turned our very nicely. She went for a regular one in a red shade, versus gel or anything fancy, and when I saw her a week later, it still looked perfect, with no obvious chips at all.

As for my treatment, this was my first experience with eyebrow tinting, where the eyebrows are coloured with semi-permanent dye, which fades over time. Having been born with very fine blondish eyebrows, which I’ve never plucked or had waxed in my life, pencils, powders and recently this mascara-like product, have been an ever-present part of getting ready to go out.

I’d heard about tinting from one of the beauty bloggers I follow, who highly recommended it. I’d been wanting to try it out and this was my chance.

Now that I have, I think I’ll keep having them done. At only $20 a go, it’s not an overly expensive commitment, and they make a definite difference. Ok, it’s not like I’m suddenly the haver of a lovely perfect eye-framing pair, because they can only dye the hair that you actually have, but now, at least, I look like I have some, without spending loads of time creating the illusion that I do. And that ended up being much more than you needed to know about my eyebrows, lol!

As for returning to Her Majesty’s Pleasure to have them done, I think I’ll try a calmer, quieter place next time, or make sure not to go on a Saturday afternoon. That said, if you and your friends are looking for a fun spa experience, where you can all have your nails and/or toes done side-by-side, while enjoying a cocktail or a coffee drink, book yourself in!

Thanks for dropping over. I hope you have a great weekend.
xo loulou

These stories were linked to.
Drugstore Beauty Department Finds 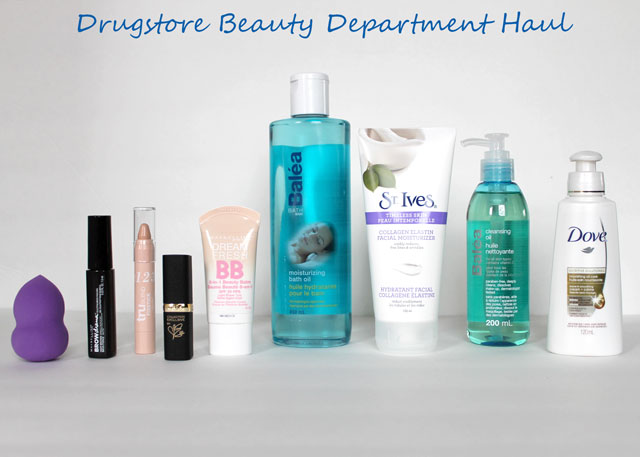