Walk With Me – Part I of a walk in Downtown Toronto

Last week Nick and I took a long walk during which I took lots of photos. Nick occasionally got (quite a bit) ahead of me but I would run to catch up to him! What I wanted to do, aside from take nice pictures, was present a walking tour for visitors to Toronto, that took you from the shopping section of Queen Street West, to Yonge Street (near The Eaton’s Centre and The Bay), and then a bit further east. I feel that this path offers an interesting alternative to a straight walk along Queen Street.

Since there are 14 sights included, I am going to split this into two posts, so as not to overload you with too many pictures in one go. This is the first half of the walk, beginning at Queen Street West and John St. to Dundas Street and University Avenue. (points 1 – 6 on the map).

(1) Very top photograph. Much Music / CTV Building, with a view looking south on John Street toward the new city hall (on King Street). The neo-gothic building was built in 1913.

(2) St. George the Martyr Anglican Church. This gothic style church was built in 1845 and much of it burnt down in 1955, with the spire being saved. The large park nearby (seen in the next photo) is the cloistered garden belonging to the church.

(3) This is a view of the back side of The Art Gallery of Ontario (aka AGO). It is currently undergoing a significant expansion.

(4) Ontario College of Art and Design University (aka OCAD U). This is Canada’s oldest and largest school for art and design, having been founded in 1867. The colourful expansion was constructed in 2004, designed by architect Wil Alsop.

(5) Henry Moore sculpture located at the eastern most side of The Art Gallery of Ontario, called Two Large Forms, completed in 1969. The soda bottle is not part of the exhibit ;) If you turn left (west) here (at the corner of McCaul and Dundas, you will find the front of the AGO, but we turned right and continued eastward along Dundas Street.

(6) Dundas Street and University, with a view looking south on University.

If you keep walking east from here you will get to Yonge Street, where you will find The Eaton Centre directly to the south (west side), and Dundas Square (east side).

This is the end of Part I of the tour! If you’d like to continue on with Part II, please click here: Walk With Me – Part II.

Thanks very much for taking a look. I appreciate your visit :)
xo loulou

ps. I am not a trained tourist guide or historian, so if anyone reading this sees any inaccuracies, please let me know in the comments.

These stories were linked to.
Walk With Me – Part II of a walk in Downtown Toronto 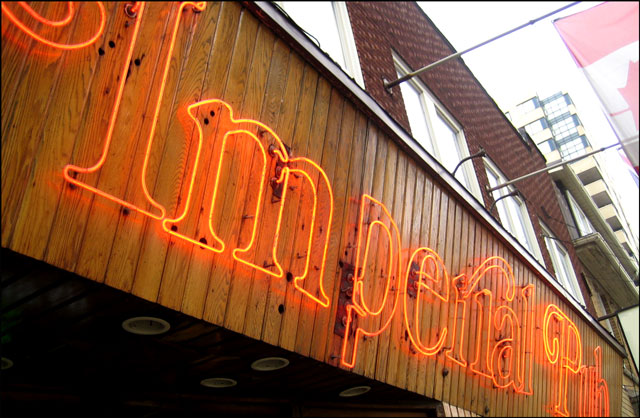