Walk With Me – Part II of a walk in Downtown Toronto

Hello :) Welcome to the second part of a long walk I took last week. This post takes you from University Avenue to Yonge street and a bit further east. (points 7 – 14 on the map).

To restate my preface from Part I, aside from showing you the photographs I took on this walk, I am attempting to offer visitors to Toronto an interesting alternative walk from the shopping area at Queen Street West, over to Yonge street (and slightly beyond).

(7) We stopped for lunch at The Imperial Pub, located east of Yonge Street at 54 Dundas Street E. It is a family operated establishment that has been running since 1944. That makes it 68 years old and considering age requirements for drinking, the first patrons enjoying a pint here would now be in their 80s! The kitchen was being renovated when we visited but there was still a light menu from which to choose. I had a delicious wrap sandwich with roasted vegetables and goats cheese, accompanied by some potato salad. And a nice cold beer … Steam Whistle was on tap :)

(8) Ryerson University. The whole campus was alive and teeming with students. We went to the bookstore to get Nick’s textbooks for his course.

(10) First Evangelical Lutheran Church, to minister to German-speaking immigrants. The church was first established at this site at 116 Bond street in 1855, with the structure itself having grown and changed over the years. The current building as pictured was built in 1898.

(11) St Michael’s Choir School. This school for boys opened in 1900, to educate and train the boys choir for St Michael’s Cathedral. It continues to offer an education and musical training to 260 boys a year, with it’s choirs singing at mass every Sunday. I have never been to mass at St. Micheal’s, but my parents have and say the singing is magnificent.

(12) St. Michael’s Cathedral, located at Bond and Shuter Street. I didn’t include a photo of it’s spire because it is undergoing renovation and was completely covered in scaffolding. This church is one of Toronto’s earliest, having been completed in 1848. At the time it was built it was considered to be too far from the city centre, but now it is very near the heart of the city.

(14) The Metropolitan Methodist Church. From what I understand, it was originally built on Adelaide Street and moved to this location in 1872. It features a special bell tower (carillon), which includes at least 23 bells that are played from a keyboard. Lucky for us it happened to begin playing right as we were passing and it was beautiful and exhilarating to hear.

Not pictured : Continuing south on Bond Street, you meet Queen Street again, at an area that people in Toronto who like photography would know very well. There are several excellent camera shops located along this stretch, including my favourite called Henry’s, which was actually our final destination and the reason we ventured out in the first place! I got a remote control for my new dslr camera. Yay.

By this point were were tired so after shopping at Henry’s, we hopped on the streetcar and bee-lined it home.

Thank you very much for taking this tour with me. Again, if you’d like to see the first part of the walk, please click here: Walk With Me – Part I

ps. I didn’t mean to get all churchy on you there at the end, but really, it was church after church on that stretch of Bond Steet!
pss.I am not a trained tourist guide or historian, so if anyone reading this sees any inaccuracies, please let me know in the comments.

Wishing you a good Sunday evening and a good week to come,
xo loulou

These stories were linked to.
Walk With Me – Part I of a walk in Downtown Toronto 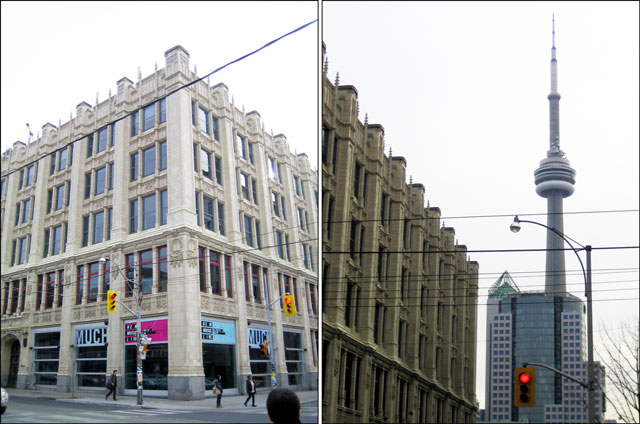