These days we aren’t completely vegetarian but we used to be for many years, except we ate fish so I guess we were what is called Pescatarians.

I’m telling you this because for all the years we didn’t eat meat, we very rarely, if ever, used our barbecue. It sat idle, covered in plastic in the garage most of the time, pulled out only when we were having friends over. During those dinners we would cook meat for them, and have some form of pre-made veggie burger for ourselves.

But we had both grown up in camping families, and a grilled dinner was a recurring element of our summertime memories. So it was that a bit of nostalgia and a desire to make more of the precious summer months by spending more time outside, got us thinking about how we could spark up that barbecue more often.

At first, the thing that stopped us was taking the time to get to get our charcoal-burner going, only to cook a few vegetables which took barely 5 minutes to cook, seemed like a lot of effort. It was a heck of a lot easier to just cook the vegetables inside even if our food didn’t have that smokey grilled flavour to it.

Then, one summer a few years ago we were having a couple of friends over, and even though they were both meat-eaters one of them suggested we have Barbecued Portobello Mushroom Burgers. Well, we totally loved them and have been making them ever since.

But we still feel that starting the charcoal is still a waste of time and fuel for such a quick cooking meal, so once we have that grill smokin’ we take advantage of the fire and cook a bunch of other things while we’re at it. Then we have plenty of tasty ingredients ready to add to other meals.

↑ In case you’re wondering, I have shorts on under that! ↑

So this is a story about one such cook-out that we had one nice late afternoon last week. Here is what we made …

First came the roasting of some red bell peppers. If you get them all crispy and burnt looking and then put them right into a covered glass dish or a sealed paper bag. Once they’ve cooled, the skins will peel right off, and the seeds and membranes removed. Note, you can leave them in the fridge overnight before cleaning them, so there’s no rush.

Then you can use them bit-by-bit to add a delicious smokey flavour to pasta sauce, chili, soups, marinated salads or dips.

This batch went directly into the freezer. This is done by laying the peeled and seeded peppers in a single layer on a parchment lined baking sheet. Then freezing them. Later they are separated and put into a freezer bag and returned to the freezer. Then, you just take out what you need for whatever you’re making.

Then we grilled some onions and button mushrooms, to be used later in a pasta dish.

After that we popped some shrimps in their shells on the coals. (Strict vegetarians, look away for this part, lol).

When they were done we had one each, dipped into a seafood sauce made by mixing bottled horseradish with ketchup. It’s such an easy sauce to whip up as needed and then you won’t have a leftover partial jar in the fridge for months before you finally throw it away. Or is that just us?

The rest of the shrimp were used in some Pad-Thai that Nick made.

Lastly came the Portobello Mushroom Burgers. Just brush them with a combination of olive oil and balsamic vinegar and you’re gold. We added some grated Swiss Cheese at the end of cooking, partially for protein but mostly for flavour. Then we garnished them with sliced tomatoes, lettuce, pickles, Dijon mustard, and hot sauce (for me only).

As a side dish I made this Quinoa, Corn and Feta Salad.

Also in this post you can see the napkins I recently found at the thrift sore, as discussed here.

↑ This guy is never far from the action. ↑

Thank you very much for virtually joining us for dinner! It was a pleasure having you here.
xo loulou

These stories were linked to.
Food Friday : Quinoa and Corn Salad 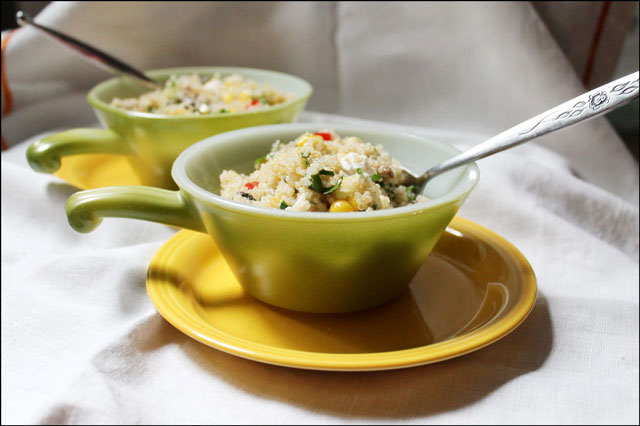 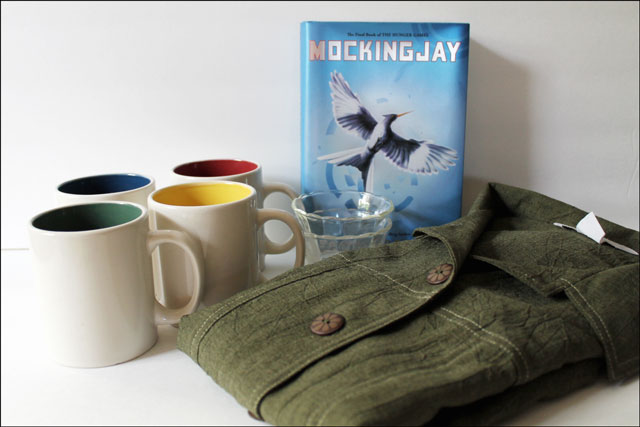