I received the gift of a concert ticket from my friend Andrea, as part of my birthday gift last month, and the show happened a week ago Thursday. We saw Imogen Heap at The Queen Elizabeth Theatre.

This was the first of two Toronto shows on her Mycelia Tour. Good thing there were two, as the Friday night show was completely sold out.

Imogen is a multi talented British musician who was and continues to be at the forefront of melding new technology with traditional instruments. She’d learned to play piano, cello and clarinet as a child and while still in her early teens, taught herself sequencing, sampling and music production using an Atari game console/computer.

Her list of credits is a very long one, as she’s been working in music since the mid 90s.

More recently, she took a few years off from recording and touring partially because she had a baby and partially because she was busy inventing a “wearable instrument” — an innovative pair of gloves which allows the user to communicate with a computer via finger raising and hand movements. They make it possible for musicians to incorporate electronic elements into their performances without having to continuously return to a computer to push buttons or press pedals.

The shows on this tour are the first during which she will demonstrate the fine-tuned version her invention, so we got to see the cool gloves in action. Here is a detailed article about them, if you’d like to know more.

↑ A short video I made, which shows Imogen Heap using the gloves while she and her computer performed alone on stage. The music is part of my favourite of her songs, “Hide and Seek“. It was quite moving to see it done live. ↑

The whole show was great! There was no opening act and she did two sets with a 20 minute intermission in between. The stage setting was gorgeous and the musicians all so talented. With her many years of experience, Imogen is a confident and charmingly talkative performer — we heard many fun stories interspersed with the excellent music.

↑ Imogen’s former band-mate Guy Sigsworth, from electronic duo Frou Frou, has joined her for the tour, and Canadian cellist Zoë Keating is playing in the North American shows. ↑

↑ Taken by Andrea with her phone. A big thank you to this much loved person for the excellent gift of an Imogen Heap live experience. xo ↑

I’d never been to The Queen Elizabeth Theatre, (which is located on the CNE grounds), before and found it to be such a great place to see live music. While I enjoy standing and dancing at the small venues I usually go to, it was really nice to have a comfortable seat to sit in. There was also a bar, so we had a couple of beers while enjoying the show.

↑ This picture was taken exactly 62 years plus one day after this stone was laid. ↑

It was such a good night in the city. Thank you for reading about it!

These stories were linked to.
Reaching the Top of a List at The CNE 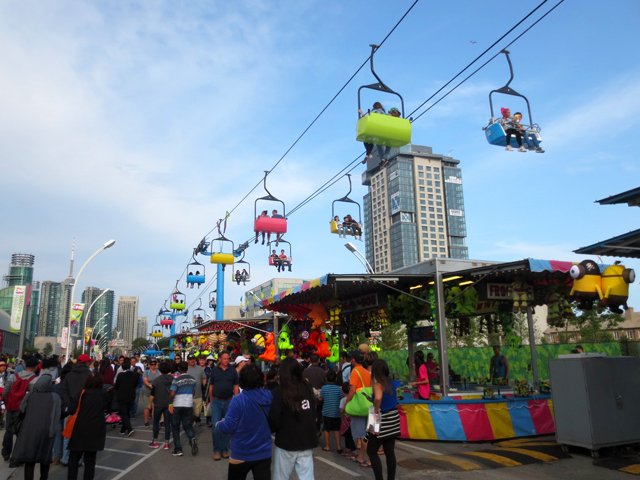