Black Creek Pioneer Village holds an enduring spot on my “Places to Go” list — while I’ve been there before, it’s somewhere that I’ll always be interested in going again. So, it took me about a nanosecond to accept the invitation from Peter and Paul’s Hospitality and Entertainment Group, to a “Field Trip for Grown Ups” that they were hosting there.

The event was organized to showcase all the ways that adults can enjoy themselves at a place that is generally thought to be geared toward the education and entertainment of children. It is a popular destination for grade-school field trips, but on this special evening, it was adults only.

Nick and I had such a good time and were very happy to be included.

↑ Here’s a short video we made of the event. The song is called “Cheer Up Old Hag” and was performed by the music historian we met there. (This is the first video like this that we’ve attempted and it doesn’t nearly include all that we got up to, but being new to video making, we forgot to film things. Anyway, it’s short and sweet like the song and I hope you enjoy it.) ↑

Black Creek Pioneer Village is an open-air museum which opened in 1960, northwest of downtown Toronto.

Located on what was farmland at the time, on the edge of Black Creek, a tributary of the Humber River, the museum contains a most remarkable collection, that of historic buildings and artifacts from the early to mid-1800s . While a barn, a smoke-house, a piggery, a couple of homes and a cemetery are original to the site, the bulk of the “village” is made up of old buildings which were moved there from all over the province. There are over 40 structures , which, along with pathways, gardens and landscaping, make a visit truly feel as though you’re strolling through a quaint 170 year old village.

For example, included are an 1830 “Doctor’s House” originally from Brampton, an 1855 Post Office and General Store (called an Emporium) from King Township, an 1850 tinsmith workshop and Masonic Lodge (connected together) from Woodbridge, and an 1840 one room school house from Concord. There’s also a Blacksmith Shop from Nobleton, and an Inn from Scarborough, and a Boot and Shoe Shop from Toronto. Each building is filled with the original furniture and decorations from the time.

Not only does the village contain all these interesting buildings and artifacts to look at, there are also historians clad in period dress, there to explain and demonstrate different aspects of life in Ontario in the 1800s. Additionally, there are many activities to participate in, such as leather lacing, yarn spinning, weaving and stilt-walking. The village is also home to a number of heritage breed farm animals, who roam about their natural habitat.

So, that is what’s usually offered at Pioneer Village during the normal daytime hours. The “Field Trip for Grown Ups” began after the gates shut for the evening, and included all the above, plus a variety of adult oriented extras, including 9 different food and drink stations, ghost story telling, an escape room experience, an outdoor theatre performance, a live band and a lot more.

Everyone was given a “passport” upon arrival, with a list of 19 different activities that were taking place all over the grounds of the village. We were to get our passport stamped as we participated, and then completed passports became raffle tickets to win a dinner for four at The David Duncan House. (We keenly took part in as many activities as we could but, alas, were not able to get to all of them. What we did do was really fun, though.)

A few places were beautifully set up as though ready for a wedding, to demonstrate the possible options. There was also a room set up with holiday/Christmas decor, including a live Santa Claus, to give people an idea what a lovely seasonal party venue it made. And there were a couple of conference/business meeting rooms set up, to show off those facilities.

Basically, thanks to Peter and Paul’s Hospitality and Entertainment Group, guests were shown that Black Creek Pioneer Village is both a wonderful place to be enjoyed by children during the day, and by adults in the evening.

And, did you know there was a TTC Subway Stop called “Pioneer Village”?! It opened in December, 2017. So, we took public transportation to and from the event and it was a breeze. Note that there’s a 10 minute or so walk to get from the station to the entry gate of the village, but it was easy to get to.

And now, on with the pictures! Oh, about those … as you can imagine, there were plenty of photo ops. Too many for one post, so I’ll be dividing this story into two parts.

↑ We began on a lovely lawn just outside the 1960s main entry hall building. It showed one of the possible wedding venues. ↑

↑ In a room down the hall, Santa was there to help demonstrate the possibilities for a Christmas party. ↑

↑ There were spaces set up for indoor wedding receptions or corporate meetings. ↑

↑ Then we were off to explore the village. ↑

↑ An 1850 Drive Shed originally from North York became a wine-bar and risotto food station for the evening. ↑

↑ We tried the Summer Peas and Asparagus Tip Risotto, which was delicious. We particularly enjoyed the chili oil garnish they offered to top it. ↑

↑ There’s the side of the building we were just at. The part at the far left is Henry Snider’s Cider Mill, built in 1840 originally located at Keele Street and Finch Avenue. ↑

↑ The village is home to Border Leicester Sheep : “The breed, developed in England during the mid-1700’s, became popular in Canada about a century later. A hardy breed, the Border Leicester adapted well to the cold climate.” (from their site.) ↑

↑ This is called a “Miser’s Purse” because it was so difficult to get the coins in and out of! There’s a slit in the top to put the money in and a ring that pulled up and down to close the purse. It was worn by women, draped over the waistband of their skirt. ↑

↑ I’ve always wanted to try spinning wool into yarn, and I finally got my chance that evening. You have to keep the wheel turning by pumping the pedal, all while feeding the wool, a bit at a time. It takes a lot of coordination, for sure. We were told that it took a woman a whole day to spin enough yarn to knit one pair of socks. On the left is a display about dying wool using natural ingredients like Rhubarb and Onion Skin. ↑

↑ The yarn spinning activity took place right beside the original farmhouse on the property, built in 1816, however, I somehow didn’t get a good photo of the building from the outside. (I was too excited to use that spinning wheel, I guess!) But, here is a shot of part of the house and a few of the inside. ↑

↑ Locally produced Magnotta Wines from the Niagara Region. I had a glass of sparkling, and Nick went with red. Both were very nice. ↑

↑ The building behind him is the second original home on the land, built by the Stong family in 1832. They’d prospered during their 16 years of homesteading and had had six sons and two daughters, so needed a much larger home, which they built within feet of their previous one.

↑ Behind the scenes of the live outdoor theatre. These ladies put on such an enjoyable and funny short play about how Canada became a country. ↑

↑ If you watched the short video (near the top of the post), you’ll have seen me playing a game with a hoop and two sticks. It was really fun, and I think we should bring that game back! I also tried the one where you push a big ring along the ground with a stick but I couldn’t get it going at all. You know the one, seen here. ↑

↑ From there, we turned right, but I wish we’d gone over towards the left, as I saw later that there was a photo booth set up in that area and a food station that we missed. Also, the old cemetery original to the land was over that way, too.

↑ While we missed one food station by turning right instead of left, there was plenty more delicious food to sample! Here we had a tasty little savoury vegetable and lentil pie, and an oyster in a half shell with horse-radish, hot sauce and fresh lemon juice. ↑

↑ The oyster station, by Oyster Brothers, was parked there, however it was actually a little cart pulled by a vintage looking bicycle, so it could ride around the grounds, offering oysters to all. ↑

Ok, we’ll stop here for the first part of this story. I hope to see you back in a couple of days for Part II. Update : Please click here for Part II .

These stories were linked to.
A Field Trip for Grown Ups at Black Creek Pioneer Village – Part... 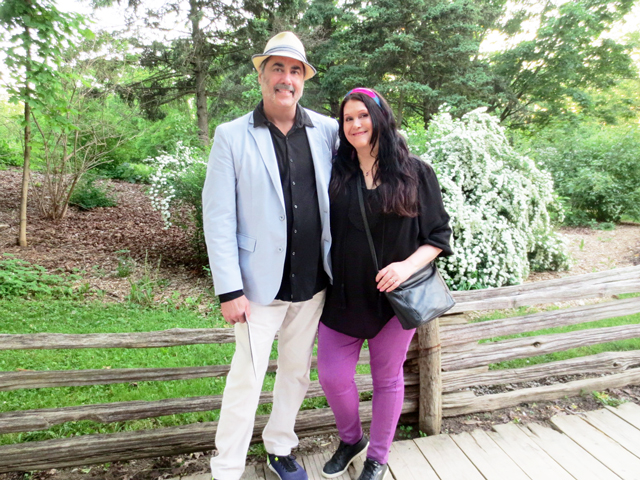