A Cat Doll Made From Socks

I wanted to show you the things I sent my cousin Lisa’s children for Christmas. They live a plane ride away, so we don’t get to see them, so it sure warmed my heart to see these wonderful photographs Lisa sent over. She and her husband kindly gave me permission to post them here for you to see.

Three year old Delilah received a Handmade Cat Doll, that I crafted from a pair of socks. Like the little girl herself, the doll is a stylish dresser, and had a couple of outfits. If you scroll to the bottom of the post, I’ll show you how I made her.

The doll has been named Ash, after the black cat who sadly passed away recently, that lived with D’s grandparents. It was good to hear that the memory of a well-loved pet lived on.

Delilah thought that Ash needed a hair-do, so the polka-dotted barrettes were her idea. I think she was absolutely right, don’t you?

And I was glad to hear that eight year old, Owen, enjoyed the 3D Puzzle I found for him at a terrific toy store in our neighbourhood, called The Toy Terminal. I wrote about this great place and the very nice people who run it in this and this post.

While I made the final decisions on what to get for the children in our lives, who all live far away, the choices were made very easy, as all I did was tell them the gender and ages of the children I needed gifts for and I was shown several things that they might like. I appreciated that they proposed lighter gifts that would be better for mailing, as postage rates are ridiculously high here in Canada, and I’d rather spend the money on the present itself, rather than the mailing of it.

So Owen received the Yacht Mary 3D Jigsaw Puzzle with 83 pieces, made by CubicFun. This is model of the real boat discussed in this wiki article.

I love these pictures, the children in them and their mom and dad. <3

Onto the making of the doll …

How to Make a Cat Doll from a Pair of Socks :

Supplies :
– A new pair of large socks in the colour of your choice. Note that the leg part of the socks becomes the legs of the doll, so if you choose a pair with stripes, it will look like the doll is wearing stripey tights. I decided to go with plain black though. Also note that a pair of socks with a heel (rather than tube socks) works better because the heel becomes the doll’s derriere.
– Some soft billowy stuffing. I found mine at the fabric store.
– Some felt for the ears and face. I went with black ears and a white face.
– Some embroidery thread to decorate the face (I used black and gray), and some regular sewing thread to make the doll.
– A bit of yarn to make the tail.
– A chopstick or pencil to help in stuffing the legs and arms.

Sorry the picture below doesn’t include all the supplies, but I wanted to show you what the socks looked like.

– Cut 4 triangles from the felt for ears. Using the blanket stitch, sew two triangles together, to make each ear. (Using two layers just makes them more rigid and able to stand up better.)
– Cut some eyes and cheeks (which are both the same piece, that’s sort of two circles attached together) from the felt for the face. Also cut a separate piece for the chin.
– Take one sock and stuff the toe, to form the head. Secure it with a temporary twist-tie, so you can easily work from the inside of the sock and hide your knots.
– Sew the ears onto the toe seam (doing that makes them stay on better than they would simply sewn through the sock.)
– Making sure the heel is to the back, use the sewing thread to attach the face pieces, putting a tiny bit of stuffing under each cheek, to make them puff out a little.
– Using 3 strands of embroidery thread (which normally comes in a 6 strand thickness, so you have to split it), embroider the face, which will include a triangular nose, and outline of the lower cheeks, irises, whiskers and eye-lashes.
– Once you’re happy with how the head looks, adjust the stuffing if required, and secure the neck closed, using a length of embroidery thread (for strength). Wrap the thread around the neck a few times and tie a good knot. Pass the ends of the thread to the inside of the sock to hide them.
– Create your legs by cutting up the middle of the front and the back of the leg part of the sock, keeping in mind that the heel will become the toy’s rear end.
– Stuff the body.
– Using a whip stitch, sew the legs, stuffing as you go. A chopstick is handy to help adjust the stuffing. Go down one leg at a time.
– From the second sock, cut two long rectangles for the arms.
– Using a whip stitch, sew these into tubes, curving the ends to make the hands. Stuff the tubes. Use that chopstick to get it in there. Sew the ends shut so you have two, closed, stuffed tubes.
– Attach the arms by sewing them through the neck part. Doing it at the neck will make the toy stronger, because the arms could easily be pulled off if they’re attached just through the sock material. Sewing at the neck means you can actually attach the top of the arms to one another, for added strength.
– To make the tail, cut 6 lengths of yarn, long enough to braid and knot. Attach them in sets of two, spacing them out a bit, so all the pressure isn’t on one small part of sock material. Braid and tie a knot.
– Your Cat Doll is done! It’s actually pretty easy and fun to make, so I hope you’ll try it.

If you want, you can make some clothes for your doll. I made some with buttons, snaps and something to tie, which my cousin said were perfect for a three year old who is just learning how to work those things.

Being an experienced crocheter so just winged it on the dress, sash/scarf and cardigan, without writing down what I did, so I’m afraid I don’t have a patter for those.
The bibbed skirt, that crosses at the back and closes with snaps, was sewn from cotton. I did take detailed pictures of how it was done and could post a tutorial for how to make one to fit any size of doll, if you’d like. Let me know in the comments.

If you’d like to see what I made Delilah last year, there’s a post about it here.

Thanks very much for checking out my post,
xo loulou

[Follow-up : I was happy to find this tutorial linked-up over at Knitted Bliss Blog, in this article called ‘Pin Ups: My Favourite Things on Pinterest This Week’]

These stories were linked to.
A Toy Store(y) 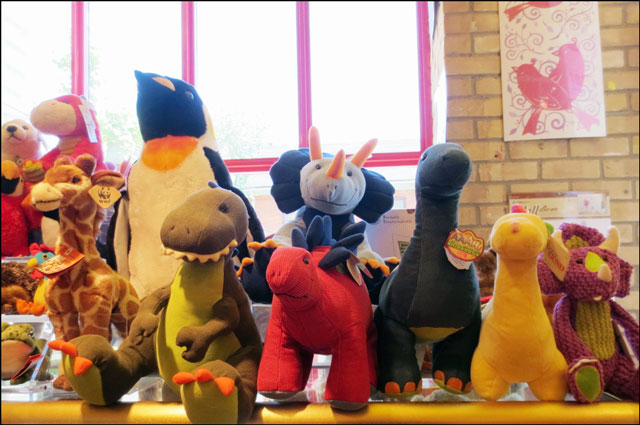 Shopping for Toys on Queen Street West : The Toy Terminal 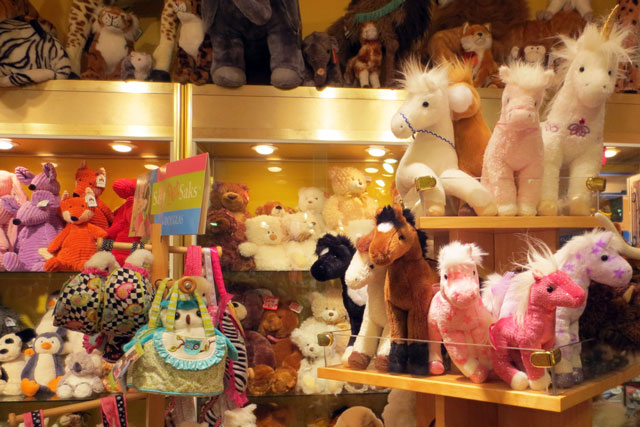 A Special Guest is Here to Show You Something 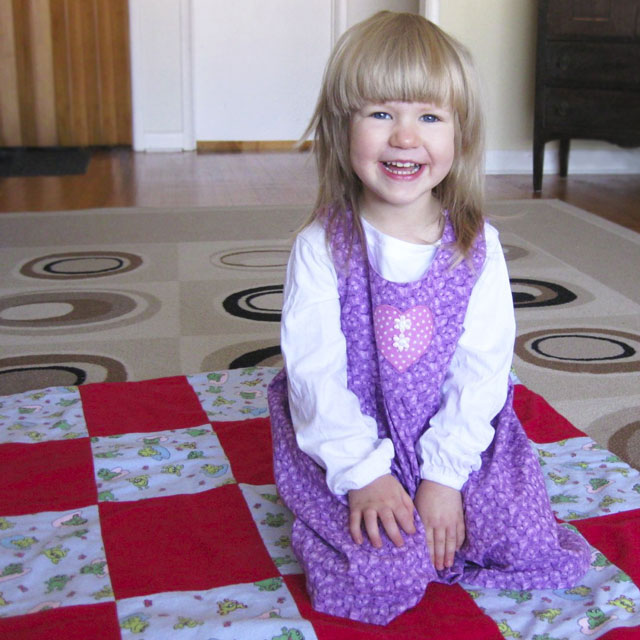