Once in a Lifetime : A Rare Thing to See in These Parts

Back in October (here) I wrote about a visit to a very old greenhouse here in Toronto called Allan Gardens. In that post I showed you a whopping 22 photos, after making a concerted effort to choose wisely from the total of 175 shots taken (here’s to digital cameras and to always carrying an extra battery around!).

The place was so photogenic that I snapped and snapped the whole time I walked through it, trying to capture all that it had to offer.

But it is only now, well after the fact, that I realize that I missed taking the most important shot that could have been taken at Allen Gardens that day, that being one taken from the outside, from a northern angle. I had approached from the east and left via the south, and just didn’t know to go outside and walk around the full perimeter.

So I missed what would have been an important shot, that of the Agave Americana, commonly known as the Century Plant and native to Mexico, that bloomed at the gardens this summer.

What’s the big deal? Well, that particular plant is estimated to be 75 years old. It was placed in the greenhouse back in the early 1960s and has resided there quietly for 50 years. Apparently it has basically just sat there, not doing much at all.

Then suddenly in early spring the gardeners noticed that something was up with the Agave plant. It had sent up a shoot, that began a rapid growth spurt skyward. It quickly became clear that the sprout would soon be hampered by the glass ceiling, so they made the decision to break a small hole into the glass, so it could continue to grow. And grow it did, ultimately reaching a height of 2 metres above the greenhouse. And then this sprout bloomed brilliantly with yellow petals.

You can read a news story about the event here if you’d like.

This was the one and only time this plant would flower in its long lifetime, and now it will die.

And there I was, alert enough to notice the runaway stalk and the hole in the glass, and to take a single picture of the phenomena from below (as seen in the first picture), but I had no idea what I was taking a picture of, or its significance. And I was so unimpressed by the shot I got that I didn’t even bother to include it in my original story about my trip to Allen Gardens.

So without a picture of my own taken from outside the greenhouse, I will include one taken by another Toronto blogger who did have the foresight to get the shot, Mary deB over at Knitting On The Cam.

She was at the greenhouse a couple of months earlier than I was, and states that at that time the flower was some days past its finest. You can see that the petals have dropped. Surprisingly I can find no picture online of the plant when the petals were still on the flower, but they would have been there for only a few days at most.

Lacking a picture of this particular Century Plant at its peek, I’ll include this picture of another one when in flower, with credit going to The World of Succulents

It goes to show that sometimes you can be looking at or experiencing something of importance, but have no idea what it is you’re looking at.

It reminds me of something I’ve been thinking about lately, that sometimes you are seeing someone for the last time, but you don’t realize it’s the last time until years have gone by and it becomes clear that it was. Little did you know at the time that the farewell was bade would be the last with that person.

This is also a reminder for me and for you to stop and smell the flowers, or at least photograph them properly if they are far too high to reach.

Thank you for taking a look. Wishing you a terrific Friday and weekend to come.
xo loulou

These stories were linked to.
A Visit to the Enchanting Allan Gardens Toronto 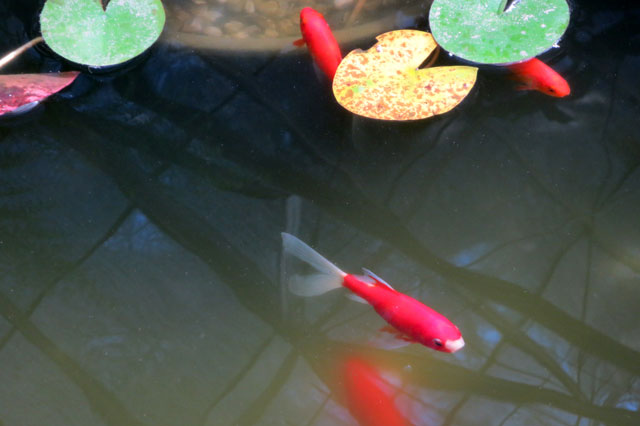