How Do You Like Them Apples? : Ideas For When They are Aplenty

No doubt you’ve been seeing apples to the left of you and apples to the right lately. It has been apples, apples everywhere these days. Unlike last year when a late frost harmed all the blossoms and we had very few local apples, this fall they appear to runneth over.

We got a bunch of Ontario Gala Apples recently and this is what we did with them, aside from just eating them as a snack.

Of course, there was pie, so we’ll start there. Nick made one regular sized one which he baked right away, and three small ones that he stuck in the freezer unbaked, awaiting an evening when a warm piece of pie will be just the ticket.

As you can see that he didn’t quite know how to make a lattice-top, but it’s the thought that counts! And you can’t help but love a little dough heart on there too. And it tastes just as delicious, no matter how creative the artistry.

↑ There’s one of the small pies that he put into the freezer as is (uncovered) and then after it was frozen he sealed it in a large freezer bag and returned it to the freezer. ↑

He’s been making apple pie for a long time so it’s become one of his specialties. He just peels and slices the apples thinly with his mandolin, putting them into a bowl with lemon juice so they don’t brown while he’s working. When he has his pastry rolled and ready he piles in the apples and plunks a few cubes of butter on them. Then he sprinkles on some brown sugar and a mixture spice mixture of allspice, nutmeg and cinnamon.

I asked him to slice a couple extra apples for me, because I wanted to make some Apple and Onion Relish, using up some of the fresh thyme and rosemary that are still doing nicely out in my herb garden. Just as he has been making his pies for ages, I have been making this relish.

It is very nice served with cheese and crackers, and even makes an inexpensive cheddar into quite a treat. If you eat pork, it can also be served as a side with that.

It freezes very well, so go ahead and make extra. In the picture those jars are frozen because Nick didn’t realize I wanted to take a picture of them first. (What was he thinking?! lol)

Here’s how to make Apple and Onion Relish: Peel and chop apples to give you 2 cups. Chop some white onions, also to give you 2 cups. Heat 1 tablespoon of olive oil in a frying pan, and then add the apples and onions. Saute about 3 minutes. Add 1 1/4 cup water and continue to cook until soft. Stir in 1 teaspoon apple cider vinegar if you have it, or balsamic or wine vinegar if you don’t. Add 1/2 teaspoon of salt and about 1/4 of a teaspoon (or so depending on what you like) of the following dried herbs and spices – cinnamon, allspice, nutmeg, cayenne pepper and sage. Cook until mixture is reduced to a saucy consistency. Stir in 1 teaspoon each of chopped fresh thyme and rosemary, or if you don’t have fresh, add about 1/4th dried when you add the other dried herbs.

Another thing we did was add an chopped unpeeled apple when cooking some potato and chickpea curry. It added just the right amount of sweet to the hot and spicy dish. If you want the recipe for this, let me know and I’ll get it up. Those little round bits you see are whole mustard seeds cooked into the sauce.

And finally, i have an apple related cocktail suggestion, too! Using some of the freshly pressed apple cider we picked up during our drive to the countryside (here), I perfected a very tasty rum-based drink, sweetened with a touch of Maple Syrup. Note, I also made some of this using regular apple juice, and it was good, but not as good as using the fresh cider.

To make two drinks the size in the photo, mix together : 1/2 cup apple cider, 3/4 cup soda water, about 1 teaspoon (or to your taste) of real Maple Syrup, and 2 ounces rum. Serve with ice.

I also have this recipe for you, for Apple and Cinnamon Muffins, created by my friend Laura.

I will close with a wish to you for happy apple eating!
loulou

These stories were linked to.
Road Trip to Farmland 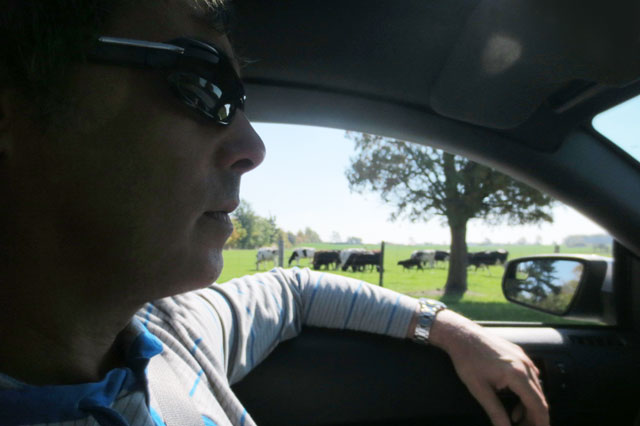 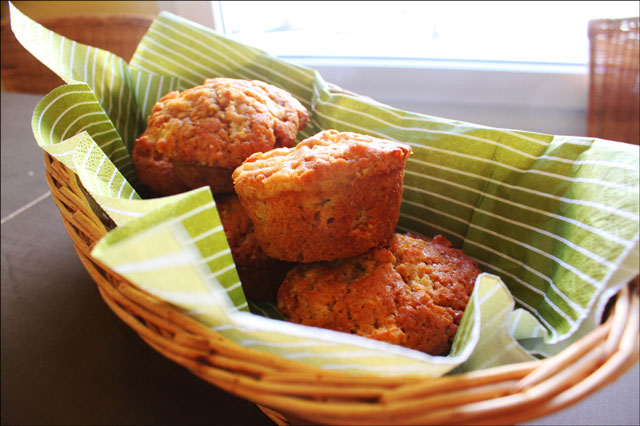