Roasted Vegetable Puree : Make it Ahead for Homemade Soup Later

This week’s food post is more a suggestion than a recipe. It’s an idea that will help you make a delicious and nutritious soup in no time flat when you’re on the go and need something quick. And it will save you money too. Tasty, healthy, fast to prepare and economical? That is pre-made Roasted Vegetable Puree for you!

So next time you’re using your oven for anything, consider roasting some veggies in it while it’s hot. Baking a cake? Have a pan of mixed fresh vegetables ready to pop them into the oven while you’re heating it to the right temperature, take them out while you bake the cake, and then put them back in after it’s done, to use up the extra heat that remains in there. Or, making a lasagna? There are two racks in that oven so why not roast some vegetables as the same time?

Since the vegetables are going to be pureed anyway, you can cut them into small pieces which will make roasting time really quick. Choose what you like … things that roast well include : carrots, parsnips, potatoes, asparagus, cauliflower, onions including green onions and garlic. Cut them up (except the garlic … peel and leave the cloves whole.) Put them all into a big bowl together and add enough olive oil to lightly coat them. Toss and then place them in a flat layer on a baking pan (like a cookie sheet). They will take about 10 to 15 minutes of cooking time, depending on the temperature of the oven, which doesn’t really matter. Give them a stir part way through, and when they’re almost done, turn the oven right off and let them finish cooking in the heat that is still in there.

Then go back to frosting your cake or enjoying your lasagna! If you don’t want to deal with them then and there, you can put them and any juices in the bottom of the pan, in a covered container in the fridge at that point to finish off when you have a couple of minutes the next day.

To make the puree you can use a food processor or an immersion blender (which is what we use), adding just enough water to make a thick vegetable paste.

Divide the paste into 1 to 1 1/2 cup quantities and put into containers, which can then be frozen. We use canning jars and if you do too, just remember to leave some space at the top of the jar and consider freezing the jars upright without the lids on, sealing them tight later (because of the possibility of the food expanding as it freezes and breaking the glass). We’ve never had a jar break in the freezer, but I should mention the possibility of that happening. Or you can just freeze in plastic containers, but we don’t have many of those, preferring to use glass for food storage. Since the puree is thick you could also use freezer bags (as shown here when we prepared pumpkin puree).

To make the soup at some later date : Defrost a container of puree, either by remembering to remove it from the freezer the previous evening and putting it in the fridge, or by running it under some hot water. Note that it doesn’t have to be totally thawed, just enough to get it out of the container.

If you’d like noodles in your soup, cook them separately. Any type of noodle would do … we used egg noodles the day we had the soup in the pictures.

In a soup pot, saute some onion and garlic (if you like it), in a bit of olive oil. Add some carrots if you want. Yes, these are vegetables that are also in your puree, but it’s nice to have a few chunks in your finished soup too. The day we made ours, we also included some chopped mushrooms, hot pepper and frozen peas. Once your fresh vegetables are soft, add the puree and enough water to make it soupy. If you want meat you can add bite-sized pieces of cooked meat (like chicken, pork or beef). Season with fresh herbs if you’d like and some salt and pepper. Add a splash of fresh lemon, lime juice or wine vinegar. Taste it to see if you need more salt. Serve it up and enjoy.

Oh yes, I should talk about the money saving part of this idea : Aside from homemade soup being less expensive than quality canned soup, you also save in energy costs by cooking the vegetables while the oven is already hot for another purpose. Additionally, you can use whatever assortment of vegetables you like or have or that are on sale at the time.

We’ve made some of this puree twice this month … once when I was making these crostini toasts and again when I made these amazing chocolate macaroons for Nick’s Easter treat.

I hope this inspires you to think about your future hungry self and roast some veggies next time you’re baking something.
Thanks for taking a look,
xo loulou 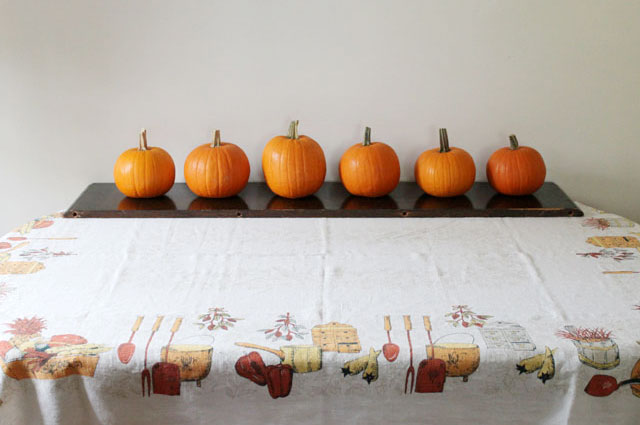