I’ll have to back up a bit with the next two stories I post, as the holidays butted in and occupied all of the blogging time! And, I don’t want to just skip posting about these two special nights out, that occurred in November, because they were important celebrations — “Friendiversaries” with two cherished people, Meghan and Julie.

Today, I’ll write about a lady-date with Meghan, whom I’ve known for 8 years now.

We met at a workplace, and while we’ve both moved on from there, the bond we formed, first as colleagues and then as friends, carries on. She’s a fun, smart, adventurous and sweet person, and I’m glad to have her in my life.

One thing that we first found a mutual interest in is art, so it made sense to include the viewing of some in our get-together. We went to the AGO, where we saw the Guillermo del Toro exhibition for a second time each (I wrote about this show, which has now ended in this post), and three other temporary exhibitions, that were fantastic : The AIMIA / AGO Photography Prize Exhibition, Room for Mystics, featuring the creations of Sandra Meigs, and a retrospective of the work of artist Florene Stettheimer called Painting Poetry.

All three of these shows are still on – the Photography Exhibition and Room for Mystics run until this Sunday, Jan 14, and the Florene Stettheimer one is on until January, 28, 2018. All are accessible with regular admission. So, this weekend, would be a perfect time to go to the AGO, especially considering that Toronto weather is forecasted to dip back down well into the negative temperatures! (I apologize for going on and on about our cold weather on these pages, but damn, it has been remarkable this year.)

If you happen to go on Friday evening (when hours are extended until 9pm) we might run into one another, as I’ll be there with, by coincidence, Meghan and Julie. If you see us, please say hi! It’s also open late tonight (Wednesday) and entry is free.

Here’s a look at these shows …

The AIMIA / AGO Photography Prize Exhibition:

This is the 10th Annual competition, open to contemporary photography artists from around the world. The work of the four finalists are on display.

↑ I got Meghan to pose just right for this picture, and then forgot to take the shot that would give it context! The original photograph includes the shadow of the arm. ↑

↑ This bronze sculpture, called Raise Up 2014, was created to represent the heads and arms of goldmine recruits of South African, who had to strip down and pose like that for their medical examinations. The workers were photographed in the ’60s by Ernest Cole, and Hank Willis Thomas made this sculpture based on the historic picture. (You can see the historic photo here if you’d like.) ↑

Boisjoly’s work also included a room with images that only became apparent when either viewed with special glasses with a light attachments, with a smartphone lamp or after photographed using a flash. It was really neat to see.

To quote the written description : “To the naked eye, these white on white images are barely visible. When we activate the works with light, they become vivid evidence of historic moments easily forgotten in our fast-paced visual culture. Through this experience, we become both researchers and witnesses to the ongoing collective struggle for equal rights in North America. Thomas uses the images in these works, sourced from press photography archives from the mid-1900s, as a counterpart to images of protest in today’s media. His method of working echoes the process of artists in the 1960s like Andy Warhol and Robert Rauschenberg, reminding the viewer that the past may not be visible, but is always present.”

↑ The only time I can remember being encouraged to use flash photography at a gallery! ↑

Each of the four finalists presented thought provoking and beautiful work, that we felt fortunate to see all of it displayed at the gallery. There can only be one winner, though, and after viewers were asked to vote for their favourite, Hank Willis Thomas won the $50,000 prize.

Sandra Meigs : Room For Mystics, . Without doubt, a spin through this room will leave you in lighthearted state of mind!

Meigs’ paintings were accompanied by an immersive sound installation, with speakers playing a soundscape by composer Christopher Butterfield. Visitors were invited to sit on stools that were placed within the display of paintings, to relax amoungst the sound and visuals.

↑ Trying to look elegant while perched on a tiny stool ↑

In brief, Florene Stettheimer, was was an American painter, designer, and poet, who lived between 1877 and 1944. She and her sisters, Carrie and Ettie, hosted a salon for modernists in Manhattan, which is where she presented most of her work, as well as that of other artists.

↑ She would design sets and costumes for performances, creating miniature mock-ups for each look. ↑

↑ A portrait of her younger sister, Ettie. It was thanks to her that Florine’s work was shared with the world, as she made it her mission to get the work out to the public after her sister’s death. ↑

↑ I have many favourites but have to say, after seeing these breathtaking paintings, I’m tending towards Andy’s thinking. ↑

A final shot taken in the gallery — on our way out of the Guillermo del Toro exhibition, I just had to pause to take this shot for (my man) Nick, who jammed with Johnny Blitz from The Dead Boys a few times, back before I met him.

After the gallery, we took the short walk westward and sightly north up Spadina, to a new-to-me restaurant where Meghan had booked us a table : Peoples Eatery.  [Update : Peoples Eatery has permanently closed.]

Theirs is a sharing menu; we tried the Roasted Moroccan Cauliflower, Mushroom Vol-au-Vent and one of the daily specials. Everything was delicious and the service was excellent.

And, since we were celebrating a very important milestone, we went for a bottle of pink bubbly wine.

These stories were linked to.
At the Gallery : Guillermo del Toro – At Home with Monsters 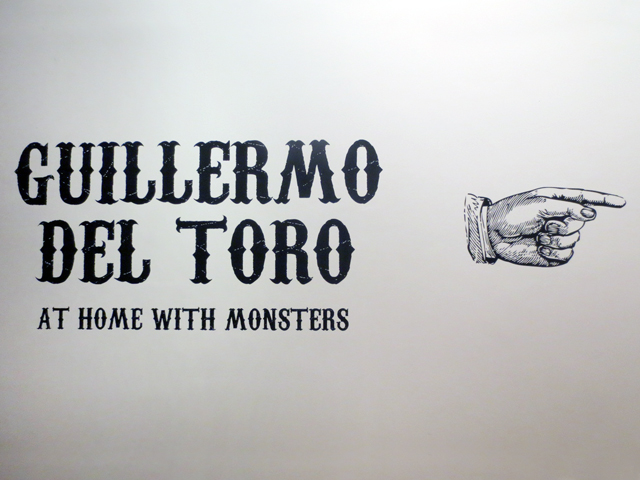