Saturday Night Out : Dinner at Buca on King Street West

It was high time for a catch up with my friend Nyla, so we got together a week ago Saturday. We decided to meet in an area of town where there are many bar and restaurant choices, on King Street West between Spadina and Bathurst.

It was one of those beautiful early summer evenings where a jacket or sweater were not needed. In fact, it was the first of the warm nights this season and it was delightful to be outdoors. The open air patios were full and the street was bustling with a fun party atmosphere.

First we headed up to the rooftop of a club for cocktails, where we found a perfect spot to talk. The sun was just beginning to set and it was quite gorgeous up there.

Then we went back down to the street, hoping to get into a certain restaurant that I’ve been wanting to try. But without a reservation the place in mind couldn’t seat us for an hour. So we agreed to check it out in the future and went in search of another place.

After looking down a somewhat dark and mysterious alleyway, we decided to head for a sign and some lights that we could see down there.

We found it was an Italian restaurant called Buca (at 604 King Street West). After a quick peek at the menu we decided that Buca it would be, and we were lead down some stairs into a beautiful open space, with a a sleek industrial look. It is housed within an old building that would have originally served as a garment making factory, and the ceilings were two stories high and the walls revealed the original brickwork.

There are three seating areas at Buca, including an outdoor patio, a large room and what looked to be a wine cellar type of room. We were shown to a couple of high stools at the end of a long table in the large room, where we could watch all the action.

We each ordered a glass of red wine from their extensive list.

Our meal began with a cheeseboard, with three choices of cheese. If I remember correctly we went with the ‘TALEGGIO – soft cow’s milk cheese with a fruity tang’, BLU DI FRABOSA – blue-veined cow’s milk cheese’, and ‘TESTUN DI BAROLO sheep’s milk cheese, covered in barolo grape must’ (I grabbed those descriptions from their online menu so please don’t ask me what barolo grape must is!) The cheeses were served with three house-made preserves, which were delicious. I particularly enjoyed the one that was made with pears. And now I will be adding homemade preserves the next time Nick and I have a ‘Wine and Cheese For Dinner’ night, as we did for our last anniversary, shown in this post.

To go with the cheese we ordered these little balls of bread that were like unsweetened crusty profiteroles. They were fun and delicious, although we nearly lost a couple as we tried to spear them with our fork and they threatened to sail across the room. (Aside: I once was on a first date and sent a baby carrot flying an impressive distance by forking it at the wrong angle. The guy and I saw one another for a while and that story became one of his favourite ‘remember when’ stories.)

For our main courses Nyla had Eggplant Parmesan and I had Gnocchi with an Asparagus Pesto. The pizzas we saw being served to other tables also looked really good.

We ended our lovely meal with a Pine-nut Tart served with Greek Yogurt and Dried Raspberries for Nyla and a Cappuccino for me.

The food was all really delicious and the service was friendly and attentive. I would definitely recommend Buca for a special night out.

These stories were linked to.
Out For Dinner with a Friend : Kalendar 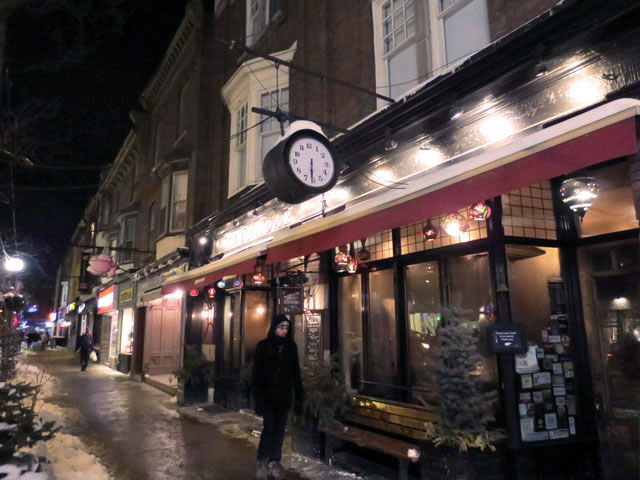 Our Anniversary : Dinner was Wine and Cheese 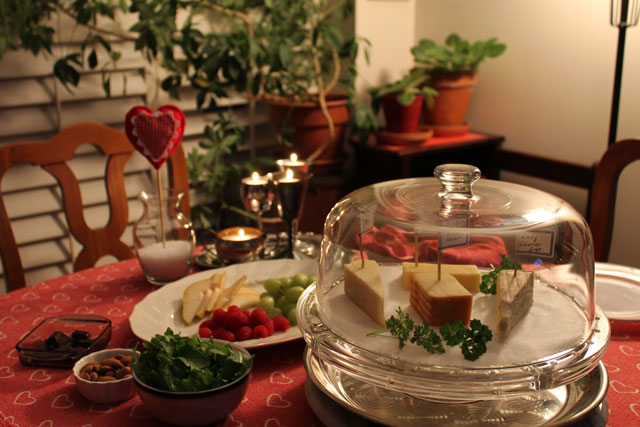