Inspired by a Dog’s Coat

It’s Saturday when I usually post something about Eddie my cat, but plans changed after a chance meeting on Queen West yesterday, and I found myself explaining to Edward that Caturday had gone to the dogs. How could it not have after I got shots of these two? When I told him about the change he went and sat in his basket pretending like he didn’t care.

As the story goes .. I had come just out of a shop called Naveren’s * and was lost in thought and laughing to myself about the funny conversation I’d just had with the storekeeper. I was brought out of my thoughts by the sight of this man and dog passing me on the sidewalk. I sped up a bit to keep up with them while taking pictures and hoping the streetlight ahead would change so they’d be stopping and it did. The guy was very nice and said sure when I asked if it was ok to take some pictures.

When I got up this morning I decided to add some photos of items I have with the same striped pattern as the dog’s coat. In Canada we know this as The Hudson’s Bay pattern, and pretty well everyone has something with it or knows someone who does. The Hudson Bay Trading Company was Canada’s first business, having begun in 1670. The coloured stripes are most predominantly linked to woolen blankets, that native Canadians wanted from Europe. I was interested to discover that these blankets were never actually made in Canada. They were made in Europe and traded for beaver pelts, furs and other goods.

Each blanket has a coding system woven right into it, which is why such blankets are called ‘Point Blankets’. The code indicates the size with larger ones being worth more than smaller ones. I have found many links about this striped pattern and the history associated with it, including the story of a man who has been studying the history of point blankets for twenty years and wrote two books about them. I’ll leave some links at the end if you’re interested.

The Bay is still in business in Canada today after 342 years, in the form of a department store that is very well loved.

Back to this morning .. we have one of the blankets that I pulled out to take pictures of. It comes from Nick’s family, and based on the style of label, appears to have been made between 1934 and 1940. Now I am so curious to know more about its origin and how it came to be in my home. It is a 3 1/2 point blanket, making it an item which weighs 5 pounds, and has been around for the entirety of Nick’s life. He thinks his parents may have been given it when moving from Europe to Canada. I am going to call his mom tomorrow and find out more about it.

The candle is one that my mother gave me once.

I’m a little late with this post today so Saturday has come and gone for many of you. I hope it was a good day, and I hope your Sunday is exactly the kind of Sunday you love most.

Note: The dog’s coat is made by Pendleton Woolen Mills, who are one of the two companies who have made point blankets for Canada for all these years. Dogs here need to wear coats or sweaters; while some might be more fashionable than others they are all cute.

Hello to the person with the dog. I hope you’ve found us and thank you so much for allowing me to take the pictures of you guys yesterday.

Some other posts showing dogs in winter-wear:
Pretty in Pink
Kiki in the Snow

* An aside about Naveren’s Button Store. I wrote about this place in a previous post here It is located just west of Spadina on the south side of Queen West. If you ever need any sewing notions and/or a really fun and interesting experience, check there.

When I previously wrote about this store I bought a red button. It’s the same button I used to make the scarf I wore the other day here

These stories were linked to.
Bits and Pieces : January 2012 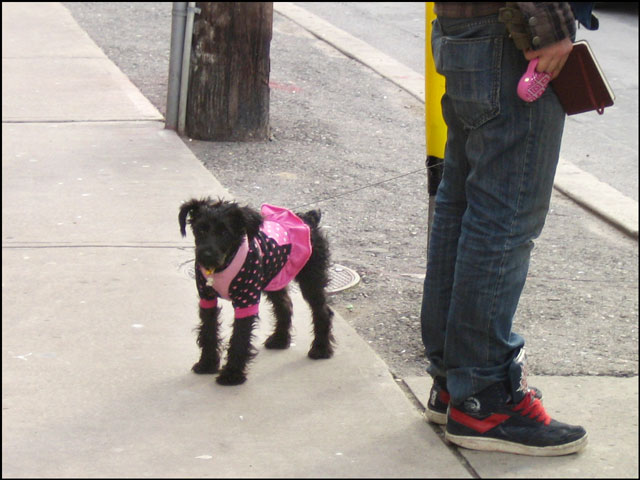 Caturday Goes to the Dogs : Kiki in the Snow 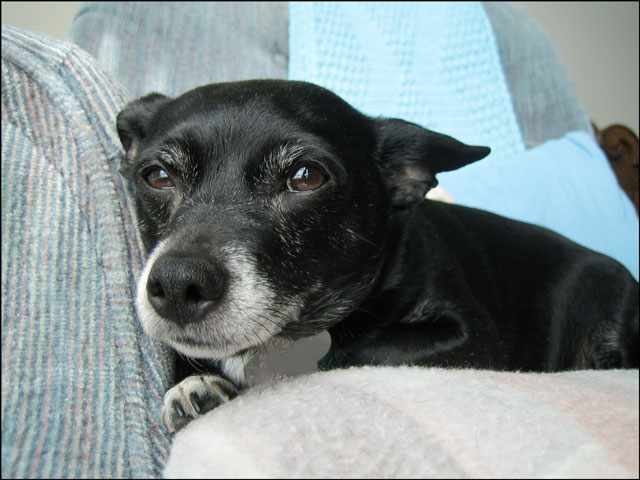 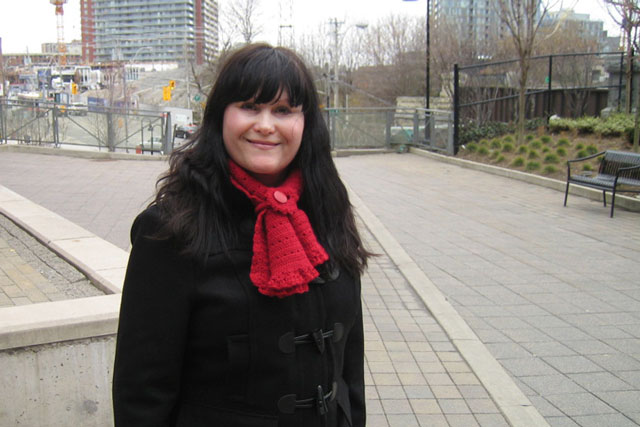