Walk With Me : Yonge Street From Bloor to College

Greetings! Welcome back if you’ve come from Part I of this walking tour. And if you’ve come directly here, this is Part II of a post about a long walk with interesting sights in Toronto.

To back up, with The Toronto International Film Festival on right now, there are many visitors in the city — I thought you’d like suggestions of interesting places to see, so I documented a walk I took with my friend Stella recently.

In the previous post, we covered part of what is called “Toronto’s Bloor Street Culture Corridor”, going eastward from Spadina to Bay Street. Today we’ll be turning south at Yonge Street and heading south down to College Street.

In getting that wikipedia link for Yonge Street (above), I just read something I’d never heard before … sidewalks were first invented in Canada with Yonge Street in mind. They were created to run alongside the muddy track so pedestrians could remain somewhat clean. This was back in around 1794 and the sidewalks were made from treebark.

I mentioned in my previous post that the two areas covered in Part I and Part II are distinctly different, even though they are located relatively near to one another. What you’ll see here on Yonge Street, is a neighbourhood that’s very much in the middle of massive change. There are construction sites and partially completed towers everywhere you look, amoungst the beautiful, although somewhat rundown, historic buildings that border the street.

There is so much going on and I am really excited to see it all unfold, as the brand new and modern structures mix in with the treasured old ones!

Note: The photo at the top of this post looks north from Yonge and St. Joseph Street, taken when we were about midway between Bloor and College.

Ok, here we go … Descriptions will precede the photographs at each stop.

↑ We’ll be travelling from point #15 down to #20. You might want to open a separate tab with this image, as there’s some scrolling coming up. ↑

(15) – One Bloor at One Bloor Street East. With 76 floors, this condo building is currently the second tallest residential building in the city (the 6th tallest building, when you include office towers). The tallest one, with 78 floors, is just down Yonge Street and is pictured further down in this post.

Both of these extreme buildings will soon be beat out by one that is under construction, right across the street from this one. That one is slated to have 85 floors. It’s located directly to the west of the one in the picture.

It’s the battle of the condo towers!

↑ There’s the construction site for the residential building which will be Canada’s tallest, once it’s finished. It’s located directly to the west of the photo above. In fact, I believe I was standing in the exact same spot when I took both pictures.↑

(16) – Formerly a Masonic Temple, built in 1888 at Yonge and Gloucester. It’s now a residential building with 20 units. From what I understand, the apartments are quite spectacular.

↑ Across the street, there’s a big construction site. ↑

↑ This is what they’re building. ↑

↑ A bit further down (at Gerrard Street), a photo showing how new construction is mixing with the old. That residential tower is the one that is currently the tallest in the city, mentioned above, at point #15. ↑

↑ This is a street that is definitely in transition. I couldn’t figure out what was being built at that construction site, but based on what we’ve seen, I bet it will be tall! ↑

↑ I couldn’t resist. I imagine he was heading from one part of the construction site to another and a bike was the easiest way to go. ↑

(17) – Lab Sense Ice Cream. By the time we’d gotten to this point, we’d walked off our brunch and were ready for dessert. We walked into this pretty place before we realized what it was all about. Then we saw what was going on, and had to try some.

Check out this interesting way of making ice-cream! Each serving is made freshly, using liquid nitrogen. From what I’ve read, there’s a reference to this substance having been used in a recipe dating back to 1890, so I’m going to assume it’s perfectly safe. They use fresh custard that freezes quickly with the addition of some liquid nitrogen, but it dissipated from the food before you eat it.

The smoke in our servings was actually a little trick for fun (which I’ll give away here, so you won’t be worried about eating it) … there are two cups, one inside the other, with a bit of LN in between, so it looks like the ice-cream is smoking, but it’s really not.

We both chose salted caramel which tasted very nice.

↑ This shot belongs between the two above. ↑

(18) – An old fire hall tower continues to survive! This was “Fire Station Number 3”, built in 1872. It was decommissioned as a fire hall in the late 40s. The old building has been demolished, but the tower remains. For as long as I’ve known it, it’s been sort of poking up from a rather flimsy looking building that was slapped up around it. It looks like this time, they’re going to showcase it. I look forward to seeing how the project turns out.

↑ As seen from the south. This image gives away the last two stops of our walk, as they’re both also in there! ↑

(19) – An elaborate building on the northwestern corner of College and Yonge, which was built in 1891-1892 for the “Independent Order of the Odd Fellows”.

(20) – College Park. This lovely building went up in 1930, as the main location of Toronto Eaton’s Department store. In fact, in the historic photograph of the Fire Hall, above, it was still being built.

Eaton’s subsequently moved south to the corner of Dundas and Yonge in the 70s, where it became the main store of what is downtown Toronto’s largest mall, The Eaton Centre. Then, in the 90s Eaton’s closed for good, but the mall kept the name (in case you go there and wonder why there’s no Eaton’s at the Eaton Centre).

And, there’s a subway stop in the basement, which is where we went, on our way home.

I hope you’ve found these two posts interesting and helpful. Again, if you’d like to see the first half of the route, that post is here.

These stories were linked to.
Walk With Me : Toronto’s Bloor Street Culture Corridor 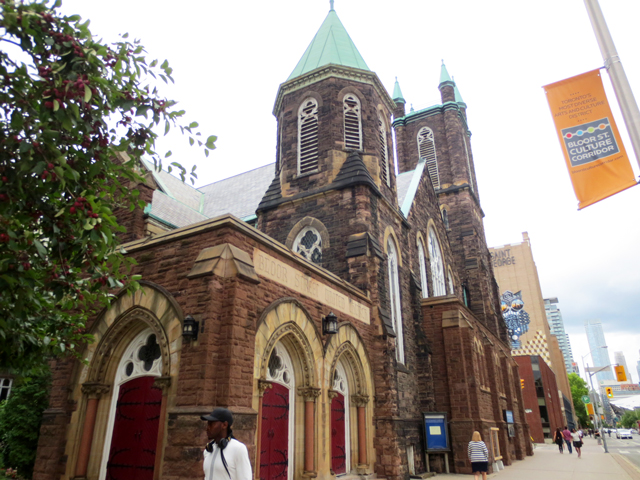