The Cherry Blossoms in High Park

On Wednesday I did something that I’ve been wanting to do for a long time: that is to make it over to High Park to see the Cherry Blossom Trees while they’re in flower.

The oldest of these trees have been in the park for 56 years after 2000 saplings were given to Toronto as a gift from the citizens of Tokyo in 1959, in appreciation for our support of the Japanese-Canadian refugees after the second world war.

Cherry Blossom Trees, also known as Sakura Trees, are native to Japan, where they are the national flower. Their fruit is inedible by humans but birds and small mammals eat it. For people, their main appeal is the very brief period of flowering that lasts about a week.

This year I kept an eye on a website dedicated to these trees, here, where they track the status of the blooming. They said that Wednesday would be a peek day to go, so I took the half hour ride on the street-car and subway and got myself there.

Not only are these trees a gift that keeps on giving, they are also a gift within a gift, as the park they grow in was also a gift to the city.

High Park is the largest public park that is located completely within Toronto. It is about 400 acres, and opened in 1876 after having been given to the city by a man called John George Howard and his wife. The conditions of the gift were that the couple could continue to live in their home that was situated on the land, that no alcohol ever be served in the park, and that the land be used for the enjoyment of the people of Toronto forever.

Now, I’ve been a little sneaky with these pictures, making it look like I could have been alone in my enjoyment of the beautiful blossoms. But I was by no means alone. It was packed! I’ve never seen so many cameras snapping away in one place before. The following shots show a more realistic view of what the areas near the various groves of Cherry Blossom trees looked like.

The flowers were still intact over the weekend, so I can just imagine how busy the park was then. The Cherry Blossom Trees in High Park are popular indeed.

A lady and I exchanged picture taking near a small stand of Forsythia bushes. What better top to wear than this vintage one, printed with spring flowers? It actually has what appear to be cherry blossoms on it. (I got it during the shopping trip I wrote about here.)

One third of the land of High Park remains in its natural state, so after I’d seen the special trees, I veered off the beaten track and ventured into the wilder areas of the park. There are too many pictures to cram everything into one post so I’ll be back with another post to show you the more rugged areas.

Thanks very much for dropping over.
xo Lou

These stories were linked to.
A Look at the Jack Lux Vintage Pop-Up Shop and What I Got 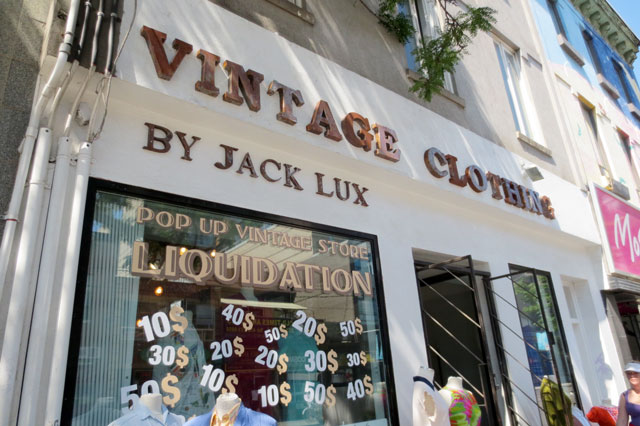