Hello! Today, I’ll share the third and final post about our lovely trip to Sauble Beach, which we took on the second week of September. (If you’d like to see the other posts on the subject, click here : Part 1 and Part 2.)

We left off after our little road-trip away from the beach area, over to a river with waterfalls and Great Blue Herons.

That evening, the ever-changing sky over Lake Huron, looked stunning once again, so we went for a walk.

The next day, Thursday, was the day we had convinced ourselves that we would, at least, get our feet wet. As previously mentioned, our week there began on the cool side, then there was a full day of gloom and rain. After that, we spent an afternoon away from the beach. So, we’d not yet dipped our feet in.

One of my memories of this beach was the amazing swimming you could do there. The sand is so soft and the water is so clear that you can see right through it. Leading up to the trip, I’d been going on and on to Nick about how much he’d love going in the water. What I had somehow blocked from my memory, was how darn cold Lake Huron is!! Even at the end of a very hot summer, after the water had had a chance to soak up the sun for a few months, it was still frosty.

So, here we are, looking all carefree, pretending our feet don’t feel like they’re soaking in a vat of ice water …

The glacial temperature didn’t stop us from returning to the beach later that evening, this time in our swim suits. Fueled by the bottle of bubbly wine we’d shared with our dinner, we were determined. We were going in!

And that we did, making as far as our waists before running out again.

The next day, we walked up to “Walker Woods Nature Preserve”, which I’d seen described (here) as “an outstanding old growth (390 yr. +) coniferous forest in the middle of Sauble Beach cottage development“.

If was beautiful in there.

At one point, I excitedly asked Nick to “look at this most interesting egg”. It was perfectly round. As I wondered what kind of bird would lay such a specimen, I realized we were both looking intently at an old ping-pong ball that had somehow found it’s way into the forest. Nature Girl, for the win.

After our hike we walked back down along the irresistible waterfront. That day, the sky appeared to merge with the water, so we could see no horizon.

That was our last day at the beach, and I was not going to leave without a proper swim. So we went back to the beach later that day, and I’m proud to say that I did it. As I recalled from previous visits, you get used to it after the first few minutes, and then, indeed, Sauble Beach is a glorious place to swim.

↑ Nick was looking over my shoulder as I opened this shot on my computer. He asked, “What’s that? A whale? Looks like a Beluga”. I looked at him crossly and then looked at the shot again. I have to agree … that does look quite a bit like it could be a whale’s tail! For the sake of accuracy though, there are no whales in Lake Huron.

Thank you very much for reading about our holiday! I hope you have a great weekend.
xo loulou

These stories were linked to.
Holiday! Sauble Beach : Part 1 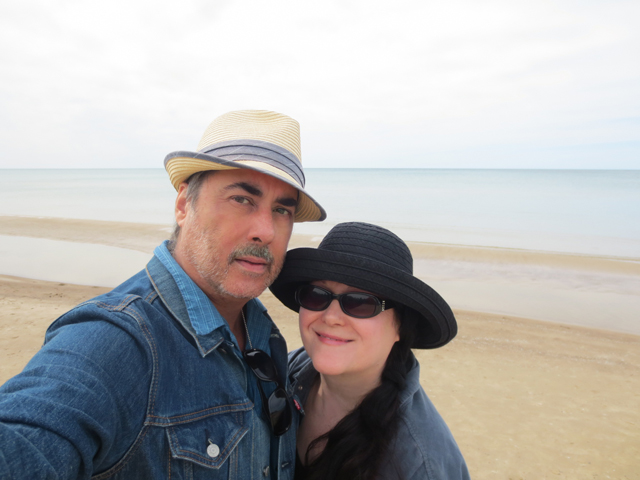 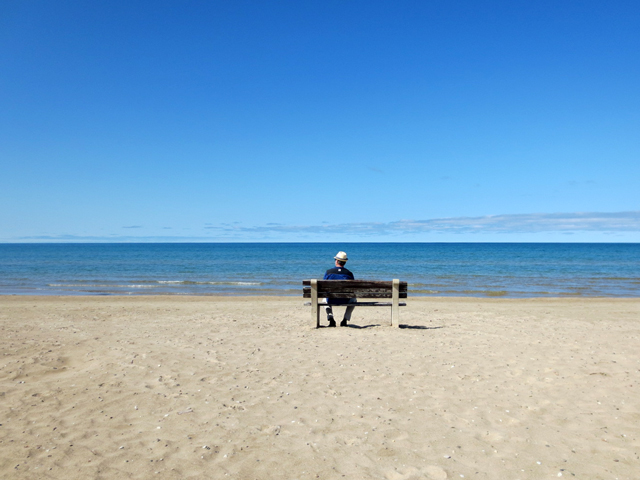