Hello! Welcome back to the second post about our little vacation in Halifax, Nova Scotia, where we went to celebrate our 20th Anniversary. (See Part 1 and Part 3 here.)

As mentioned in the prior post, the weather was very nice on Monday, our first day in Halifax. We weren’t so lucky on the second day, as it rained pretty well all day long.

We still went out, though, for a little walk and a hunt for provisions …

During a particularly heavy downpour, we slipped into a shop for cover. We picked a very good place to pass some time — everything at Jennifer’s of Nova Scotia is handcrafted by artisans from Atlantic Canada.

↑ So many beautiful handmade things ↑

Then, we ran through the rain to Shopper’s where we got snacks and to the liquor store. And then, it was back to our cozy hotel suite, where we were quite happy to hang out and relax.

To me, The Cambridge Suites Hotel shall be particularly remembered for the very comfortable bed, clad in crisp cotton sheets and a down-filled duvet, the impressive variety of cool 70s-era lamps, both in the rooms and in the public spaces, and the plentiful supply of really good coffee, not only at breakfast but also offered all day at a table in the lobby, and also via the little coffee maker in our suite.

Let’s take a look around …

… and a few details in our suite (which included a sitting room, a small kitchen area and a separate bedroom)

We’d picked up a small bottle of Baileys, which conveniently took the place of cream and sugar in our coffee!

Influenced by the hot sake we’d had the previous evening at a sushi restaurant, we also picked up a bottle of that, which we warmed in the little microwave oven.

We’d gotten some cheese and crackers, which we had for an afternoon snack, paired with the fresh fruit from the bowl that had been kindly left in our room, along with some decadent truffle chocolates.

Later, Nick popped out to Mezza Lebanese Kitchen (pictured here in the previous post), for a couple of Donairs — Halifax’s signature fast food dish. They were (very messy) and totally delicious!

The next day the weather had cleared up again, so after breakfast we headed out.

Our first stop was a place we’d noticed the previous day during our rainy walk — a pre-loved clothing shop located within a charming row of brightly coloured buildings.

Elsie’s Clothing has a great selection of vintage and consignment clothes and accessories for sale, plus an excellent assortment of vintage decorative pieces which weren’t for sale (Being a compulsive collector of vintage bric-a-brac, I checked, especially on the gnome-sitting-on-a-mushroom figurine!)

I loved the way everything was set up.

I’d previously mentioned how friendly the people in Halifax are, and the proprietor of the shop, Elsie (pictured below) and her assistant certainly contributed to that impression.

Later we found “the oldest Victorian Garden in North America”! The 16-acre Halifax Public Gardens opened in 1867 and has retained the original Victorian character thanks to a series of talented horticulturists and gardeners. It was designated a National Historic Site of Canada in 1984 which means it will be maintained for centuries to come.

↑ The building on the right is the oldest structure in the garden. It was built in the 1840s as a meeting hall for the Nova Scotia Horticultural Society. The bandstand was built in 1887. ↑

↑ Without question, I will pause for any and all miniature houses, haha! I didn’t get the story behind this one, but it stopped me in my tracks. There was also a pond in the park with tiny models of ships, one being of The Titanic (many victims on The Titanic were taken to the funeral parlour in Halifax. We had lunch in that building on our first day). ↑

↑ Amidst snow flurries flying around, this is an “I’m freezing and ready to leave this park” face! ↑

By late afternoon, the weather changed again, becoming very cold and windy, with a bit of snow. We went back to the hotel, had a soothing cup of hot sake, changed into warmer clothes and went out for dinner at a restaurant that was fairly close to the hotel.

The Wooden Monkey specializes in food prepared solely with locally sourced and sustainable ingredients. We had the Scallop Pasta, made with organic quinoa and rice noodles, and the Sesame Crusted Haddock served with seasonal vegetables and brown rice. Both dishes were really good.

We also shared a piece of apple pie, also delicious!

And, that wraps up days two and three of our holiday. I have one more post about our visit to the fun city of Halifax to come. 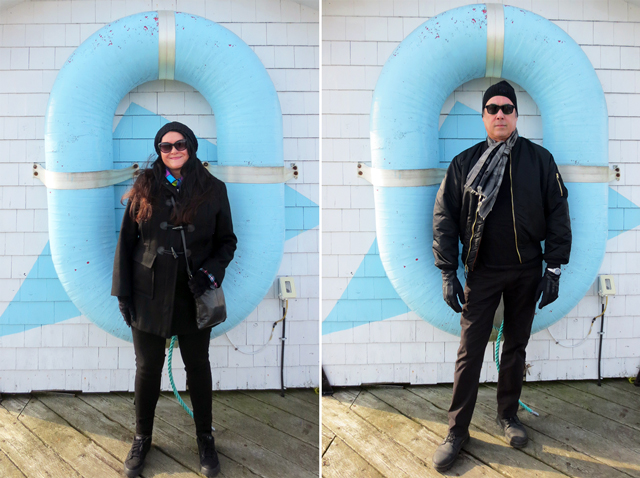 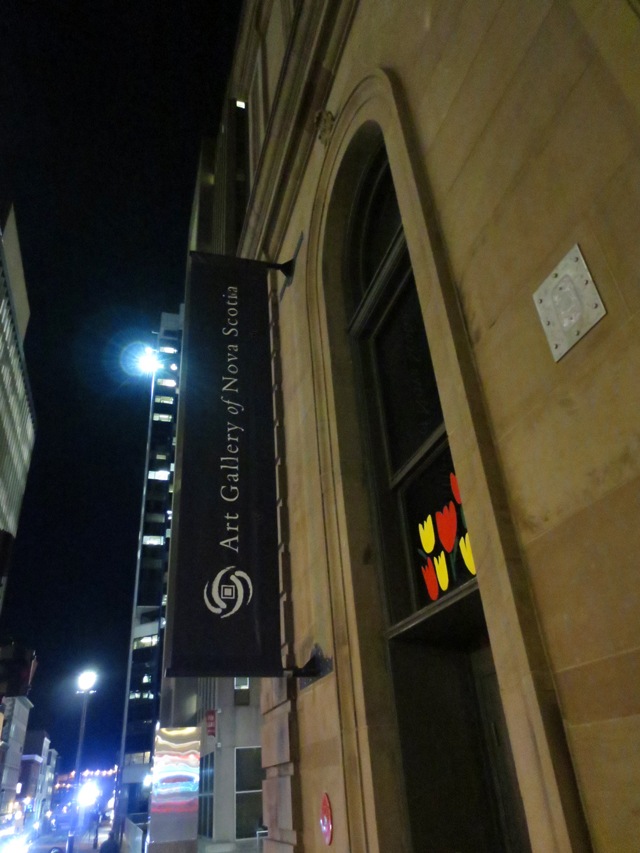