Out for a Friend’s Birthday

I had a great time out with my friends Nyla and Julie last week. It was Nyla’s birthday!

Readers here have seen me out with these lovely ladies, each highly regarded poets, before (most recently : Nyla – here, and Julie – here).

I met Nyla at my sister’s place the Christmas of 2010. We’d laughed so much that afternoon. I’d taken a good photo of her that evening so I had a reason to follow-up with her right away. We kept in touch through FB and then, five months later, met for coffee. Then again a couple of months later for lunch, and so on.

Then she had a launch party for her poetry book, in October 2012, and Nick and I went. It ended up being a really good time – (I wrote about here).

Just before we left I joined the line to have Nyla sign my copy of her book. There were quite a few people in front of me and I remember thinking at the time that I could wait or just get Nyla to sign the book at our next get together.

I’m so glad I decided to wait, because while I was in line, the friendly lady in front of me turned around and said hi.

That was Julie. During our brief conversation we ended up talking about how we both kept blogs. At the time I was new to blogging, and I’d never actually met another blogger in person, so that, in itself, was exciting. I found her blog the next day, and left a comment.

Aside from her gift with words, Julie is a very good knitter, which is the main topic of her blog, Knitted Bliss. I share her love of working with yarn, but switch out the needles for a hook, as I am a crocheter. So, during the months that followed, we bonded over our mutual love of creating things with yarn, and kept in touch via our blogs.

And so began our on-line friendship, each of us leaving comments on one another’s posts. That went on for a year before we met again in person, going out for dinner together.

These two chance meetings, that easily might not have happened, have led to relationships that I now value highly.

We recently got together to celebrate Nyla’s birthday last week.

We met for drinks at Luma, the restaurant at The Lightbox Theatre on King Street West, (which is main space for the Toronto International Film Festival).

I had a cocktail called ‘Holiday Feast’, which included ‘rosemary-infused wild turkey bourbon, cointreau, cranberry and rainbow peppercorn syrup’. Did you know that bourbon is pretty much the same thing as whiskey, except it’s made in the United States, and both are pretty much the same thing as Scotch? Anyway, I’m not usually a fan of that kind of liquor (I’m a rum girl, if I’m having a mixed drink), but the ingredients in this made it sound so tempting. Good that I changed things up and ordered it because it was delicious.

Nyla went for ‘Grandpa’s Apple Cider’, which was ‘kraken black spiced rum, apple cider and cinnamon. Julie’s drink had jalapeno peppers in it. All of our drink choices might sound a bit wintery for this late April date but it was so cold out that night and actually snowed a bit.

Luma is a lovely large open room, with a full wall of windows, and we lingered there, talking and giving Nyla gifts.

I got her a type of notebook I love, the Moleskine Reporter, which flips upwards so it good for both left and right handed people. I’m a leftie so writing in most notebooks is harder than it should be! It closes with an elastic, so is great for keeping with you in your bag. I thought it would come in handy for Nyla in her writing.

Julie was thinking along the same lines because she got her a pen! It was a beautiful Kate Spade one that I regret not getting a photo of.

Julie also kindly got me a present for my birthday that was the previous week … some Kate Spade stationery note cards. I love them.

Then we went out for dinner. We ended up at The Keg on King Street West.

Now, I have to come right out and say that The Keg, a popular steakhouse chain here, was not our first choice but we had wrongly expected to waltz right into the place we had planned to go (Valdez), without booking a table in advance. It was a mid-week dinner, so we thought that would be no problem. We were wrong. They couldn’t seat us for at least an hour, so we looked for someplace else. After checking at two other places in the area around King and Portland, that also couldn’t seat us, we found ourselves standing in front of The Keg.

I don’t mean to give the impression that this is not a good place, because, since this location opened last fall, I’ve been wanting to go. It is located within a very interesting building, which I am planning a separate post about because it has such a cool story. It just wasn’t what we were looking for on this particular night, as none of us was jonseing for a steak.

How wrong we were for hesitating on our decision to go there. It turned out to be a really good time.

The place is huge and we were invited to look around and find ourselves a seat. We lucked out and found a great one in a little side room, that had walls lined with books and some large black and white photographs on the wall. Oh yes, there was an inviting fireplace right beside our table.

We began with drinks, a Bloody Mary for Nyla, a Bloody Caesar for me (that’s a savory drink served primarily in Canada) and a Gin and Tonic for Julie.

↑ Nyla took this shot on her phone ↑

For dinner, Nyla had a Caesar Salad with grilled chicken, and Julie and I shared a few appetizers – some baked brie cheese, served with pesto and red pepper jelly, calamari, and crab cakes.

Everything was really good, but what was most special about this restaurant was the warm welcome and great service we were offered. There was even complementary cake (and three forks) for the birthday girl!

We all agreed that it turned out to be an excellent place to go and I am looking forward to my next visit.

I’m also looking forward to my next dinner out with these two.

Thanks for dropping by. I hope you have a great weekend. I’m looking forward to going to see/hear the comedian Margaret Cho.
xo loulou

ps. If you’re interesting in seeing how I made the gift bow and birthday card for Nyla, I wrote about them here and here.

These stories were linked to.
A Craving for Ramen : Ryoji Restaurant 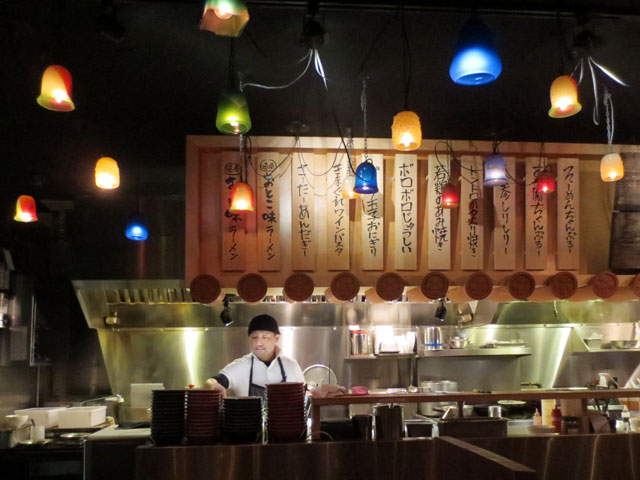 A Celebration of Friendship 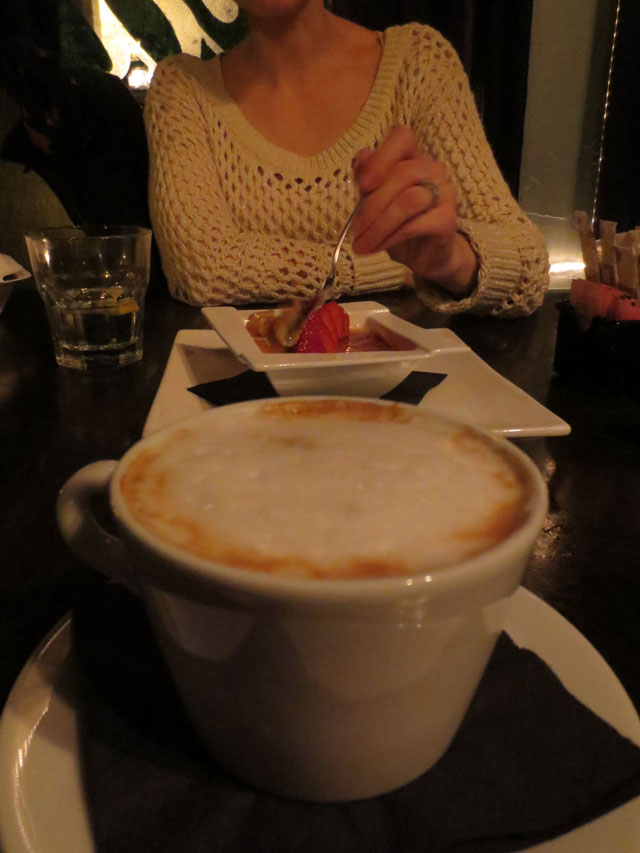 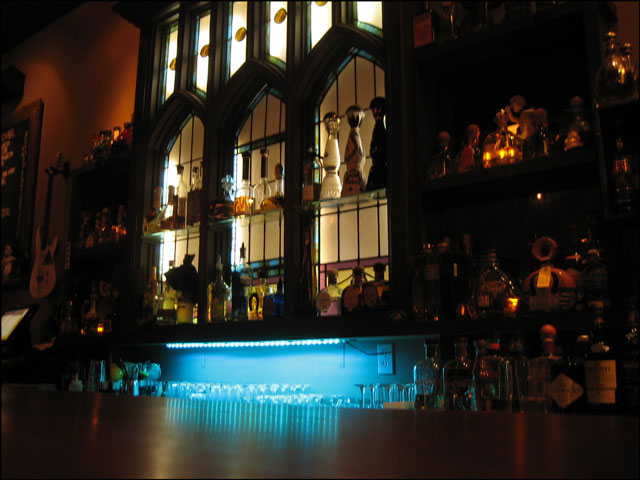 Gift Wrapping : How to Make a Fancy Bow using a Comb 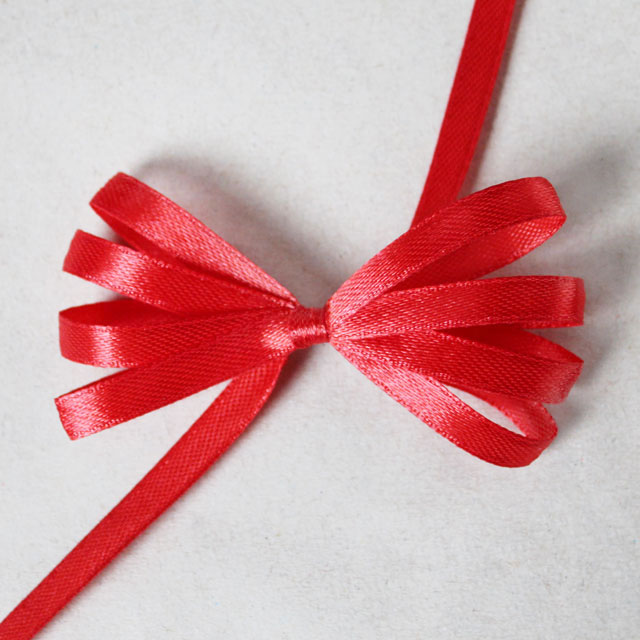 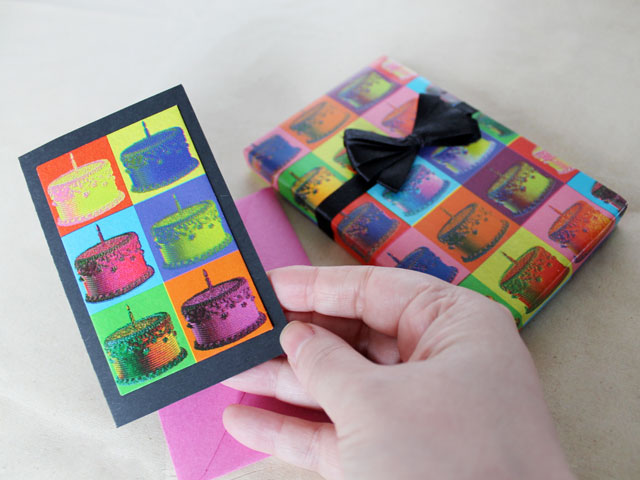