With several choices of street festivals on any given weekend during these summer months, it’s certainly the season to visit different neighbourhoods around town. On Saturday Nick and I took advantage of the few rain-free hours in the afternoon and headed over to Ossington Avenue to check out the second annual Ossfest, happening between Queen Street and Dundas.

I wrote about this area in detail last summer, (in this post), telling how that section of Ossington between Queen and Dundas is part of the oldest route into what is now Toronto. Back in the early 1800s, when Toronto was no more than a fort and a trading post, the main path through the woods from the west, included that stretch. Of course, the buildings came later, around the mid to late 1800s, but they were built right along that original path.

Luckily, many of the historic buildings are still there, home to a number of great indie shops, restaurants and bars that line the street. Many people, including us, usually go there for the fun and bustling nightlife, making this daytime look fresh and interesting.

There was a variety of things to see and do at Ossfest, including a stage for live music, different booths, activity areas, shops with special sales on, bars that are normally closed during the day, and restaurant food-stands.

We walked up to Dundas from Queen Street West, and then turned around and walked back down, which is why these photographs are taken from different directions.

↑ People were clearly enjoying this booth where stylists from Parlour Salon had their chairs outdoors. ↑

↑ I rarely include pictures of small children who I don’t know on these pages, however I can’t resist posting this one I got by chance, when randomly shooting the basketball training area. ↑

↑ Reposado Tequila Bar on the right, is a place I’ll always especially appreciate because it’s where I first met one of my best friends.

They have a great patio outback, which was open for daytime hours thanks to the festival. ↑

↑ Bang Bang Ice Cream always seems to have a line-up, festival or not. Must be very good. ↑

↑ There was a stage set up at the north end of the festival, with a full schedule of live music. The Tonkas were on stage. ↑

From there we turned around and walked back down.

This bar, Man of Kent, is usually a nighttime venue, but was open for Ossfest. Its lovely interior, as viewed through the open door, seemed to call us in for a beer.

The menu listed a bunch of delicious sounding sandwiches, so we decided to try one — Nick ordered the bbq chicken with jalapeno cheese and kale sandwich, and I the Falafel Tahini Wrap, which contained chickpeas, sweet potato, lemon tahini sauce and pickled Ontario vegetables. Then we noticed that there wasn’t a kitchen, so wondered what we’d get.

The food turned out to be very good, (so good, in fact, that Nick repeated that he liked his sandwich later, as we walked home!). I asked the server about the food and he said they got it from Foodbenders, a catering company with a shop at 1162 Bloor Street West, but who also supply quality healthy food made with locally sourced ingredients, to cafes and bars. All the bar had to do was quickly heat up the sandwiches in a press. Such a great idea!

We enjoyed our time at “Man of Kent” and were glad we went in. If not for the festival and their decision to open for it, we might never have discovered it.

↑ This old building is named “LeVack Block” and was built in 1891. It’s a restaurant now, called Omaw, which wasn’t open when we passed. ↑

↑ This booth of handmade cute children’s clothing was operated by volunteers from Do Goody’s Emporium, who give all profit vulnerable Children in Africa & Canada. ↑

↑ As mentioned, many of the lovely historic buildings remain on Ossington, however, there is new development going on too. ↑

↑ Butcher Cote de Boeuf, further down the street, were shucking oysters for the occassion. Although they are a meat shop, I see on their site that in the evening from Wednesday to Saturday and all day Sundays they open for a special “bar á vin” where they serve wine and beer, French cheeses, charcuterie and oysters. ↑

One thing I noticed about this part of Ossington street that I wasn’t aware of, is that it is a good place for shopping for mens’ clothing. There were several stores featuring very nice things. They were crowded and Nick wasn’t in the mood to shop, but we’ll go back sometime to get him something.

↑ Tiger of Sweden offers clothes for men and women. ↑

↑ Lost and Found for mens’ clothing, at 44 Ossington Ave, was a popular spot! ↑

We got back down to Queen Street just as more rain began to fall. At home later, we listened as it poured down, doing its best to ruin the rest of this outdoor festival. I’m sure people still had a good time though, in spite of the rain, by moving into one of the many bars and restaurants along this cool and vibrant street.

These stories were linked to.
A Look at Ossington Avenue in Toronto 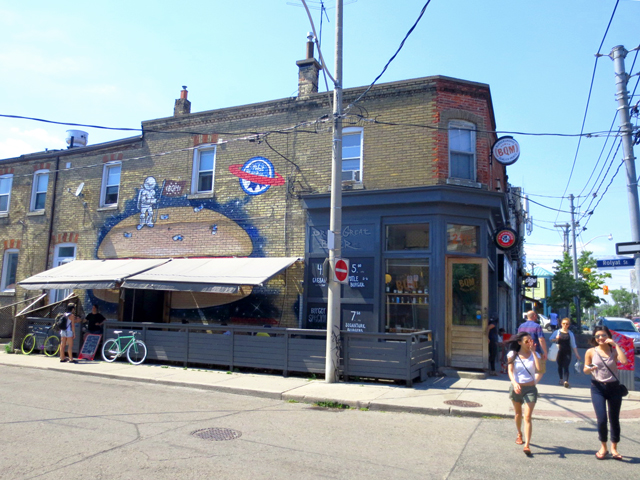