Stepping Back in Time at The Mackenzie House Museum in Toronto

Hello! Although I still have two of the places I visited during the “Toronto Doors Open Event” to write about, I’m going to interrupt that series with a couple of other posts — One about what I did on Saturday with my dear friend Stella, and the other about a terrific new exhibition at the AGO.

On Saturday, I got together with my longtime friend Stella, the one person aside from family, who I’ve known the longest, with whom I keep in regular touch. While we maintain an ongoing correspondence on email, we don’t see each other often these days though, as she lives outside the city. So, an actual date with this lovely lady is a pretty big deal!

Such a big deal, in fact, that I planned ahead — One morning prior to our meeting, I went to the library to pick up one of the “Museum and Arts Passes”, which grant two adults (and some children, if you have them) free entry into a number of Toronto’s Museums and Art Galleries.

I got the one for “Toronto Historic Sites”, with the idea of taking Stella on a surprise visit to the Mackenzie House. She and I have traveled together in the past, so I knew this was something she’d like, and since this museum was located a very short walk from where we’d planned to meet, it was a perfect activity for us to enjoy together.

We met at the fountain in the Eatons Centre, then exited the mall through the Queen Street doors. From there, Mackenzie House is located a bit to the north/east, at the 82 Bond Street.

This Victorian era house, which is the only one remaining from what was originally a row of three attached homes, was built nearly 160 years ago, in 1858.

It is the former residence of William Lyon Mackenzie, the Scottish-Canadian journalist and politician, who was Toronto’s first mayor (in 1834) and the leader of the 1837 Upper Canada Rebellion. Mackenzie was undoubtedly a bad-boy, who, at one point, had a price on his head of 1,000 pounds, which was an extremely high sum at the time. The original proclamation of this order is displayed, hanging in a frame, within the dining room/office of the house. (His grandson was William Lyon Mackenzie King, who was Canada’s 10 prime minister, from the 1920s to 40s.)

William Lyon Mackenzie lived in this home during what became the final years of his life – from 1859 until his death from a stroke two years later in 1861, at the age of 66. From what I’ve gathered, he died inside this house, which would be the reason it is known today as the most haunted house in Toronto and possibly in Canada. His wife and some of his many children continued to live there until 1871.

I’m not sure who lived there in the intervening 95 years, until the mid 60s when it was converted to the museum it is today, but during those years the matching homes in the row, the two on either side of this one, were torn down, leaving this little piece of Toronto history thankfully intact.

↑ The entrance is at the back of the house, via the extension added in the 60s, when made into a museum. ↑

As an added bonus, we happened to have arrived just as a cool demonstration in the recreated 19th century print-shop was beginning — Since Mackenzie was a newspaper publisher, with offices originally on King Street, the museum includes a historically accurate print-shop, complete with a 175 year old printing-press, which we were able to use with the assistance of a knowledgeable guide. The shop includes some of the very cabinets that belonged to Mackenzie.

↑ Mackenzie’s original cabinet on the left. The stamps for capital letters were always kept in the top drawer of this type of cabinet, and the small letters in the second drawer, hence the terms “Upper Case and Lower Case letters”. ↑

↑ We were given our creations to take home. ↑

Once we were finished in the print-shop, we were taken in to see the house …

↑ On the main floor, The formal dining room, which was mostly used as Mackenzie’s office. ↑

↑ The family was not wealthy, and therefore rented most of their furniture, so most of the furnishings, while historically accurate are not the actual ones used by the Mackenzie’s. The fancy “slipper chair” was an exception, being a piece owned by them. It is low to the ground and shaped as it is in order to accommodate ladies putting on their shoes (or slippers, as they were called) while wearing big hooped dresses. ↑

↑ Upstairs, The master bedroom upstairs. I noticed a white orb peeking out from under the bed, which I mistakenly took to be a balloon, thinking they must have had a party in there or something. But, upon closer inspection, I saw it was a chamber pot — no inside facilities in those days! ↑

↑ A second bedroom, where some of the daughters stayed. ↑

↑ Downstairs, the regularly used dining area, and a bed that would have been for the cook. ↑

↑ A demonstration of the gas lights. ↑

↑ After the museum, we back over to Yonge Street, and south down to Temperance Street, passing Massey Hall on the way. (I previously wrote about this historic theatre last summer — here. In that post I discussed the new condo building going up adjacent to the theatre, which you can see taking shape in this photo). ↑

We had lunch at Yonge and Temperance, in one of the restaurants within the beautifully restored Dineen Building (which I visited and wrote about in this post). The place was Little Fin, and we each had a fish sandwich and a house-pressed lemonade and raspberry drink. I chose spicy broccoli and a seaweed salad for my side dishes, and Stella had fries and coleslaw. Everything was really good.

↑ Stella took the picture of me with her phone. ↑

Following lunch, we headed north to The Bay department store, where Stella got a really nice bag and I got a new hat.

↑ A display at the entrance of The Bay, in honour of Pride weekend. ↑

From there, Stella wanted to see the Toronto sign at Nathan Phillip Square, so we went over there.

↑ I got this shot of her and the sign with her phone. ↑

We walked and talked a bit more after that, saying our goodbyes at the corner of Yonge and Dundas. It was a great day spent with a beloved friend.

These stories were linked to.
A Great Concert in a Beautiful Setting : Jenny Lewis at Massey Hall 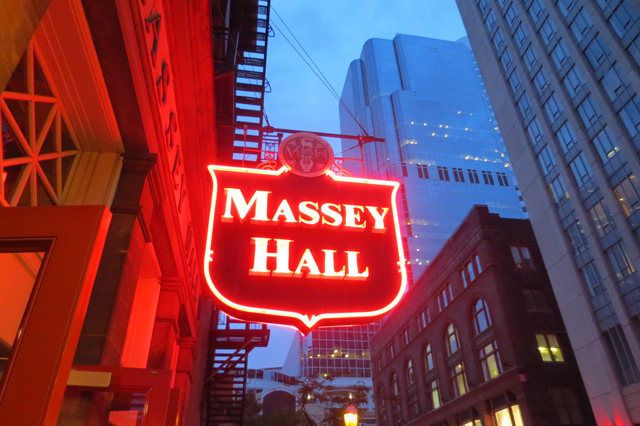 The Old and New Come Together Beautifully : The Dineen Building Renova... 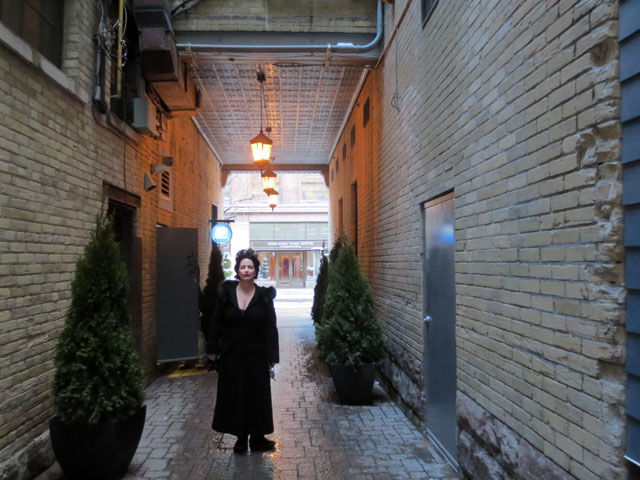