Doors Open Adventure Part I : Failure To Reach The Top

It’s only taken me seventeen years, but I finally made it out to Toronto Doors Open this year! I’ve always wanted to go but, for one reason or another, I haven’t.

“Doors Open” is when the public are invited to see inside interesting buildings, which they would otherwise not normally have access to. The festival spans over a weekend and locations are chosen for their unique historic, architectural and cultural significance. This year there were 150 buildings participating — the number was based on the fact that Canada celebrates its 150 birthday in 2017.

Since the participating buildings are located all over the city, a bit of advance planning is required. After studying the map, giving consideration to the fact that I was going to walk it, and that I wanted to take photographs (not all allow photography), I chose three places to see to go, on the Sunday/second day : (1) One of the city’s first skyscrapers, where people were being given the chance to ride the elevator and check out the top floor. (2) A historic building that has recently been dramatically changed, while maintaining the old structure. (3) A historic site due for a major restoration, that will bring it back to its former glory. On my travels, I happened upon a fourth location that was participating, a beautiful old church.

Each of these sites was really neat, and I got a lot of pictures, so I’ll be sharing my “Doors Open Adventure” in four parts.

Today, we’ll take a look at my first stop, a skyscraper located at King Street West and Bay.

Designed by German/American architect Mies van der Rohe, construction of The Toronto Dominion Centre began in 1964 and finished in 1969. The entire “Centre” includes 6 buildings, with floor-counts ranging from 22 to 56. Visitors for Doors Open would be travelling up the elevator to the top floor of the tallest building, which was apparently decorated as it would have been in the sixties. I wanted to see that, to be sure!

But, when I arrived at around 11am, the line-up was so long that it would have taken me 2 1/2 hours to get to the top. I got in line for about 30 seconds before realizing, A – there was no way I wanted to wait in a line-up that long for something I didn’t “need” to do. B – If I did wait, I’d be cutting it short on one of the other sites I wanted to see, where tours were ending at 3. So, there you are, the reason for the title of this post … I didn’t make it to the top!

Regardless, I’m glad I went over, because photographing the buildings from the bottom was still pretty cool. I hope you agree.

I left the lobby through a door on the west side …

… and came upon a field of relaxing cows!

This sculpture of seven life-size bronze cows is called “The Pasture” and was created by Canadian artist Joe Fafard in 1985.

As mentioned The TD Centre buildings were some of Toronto’s first skyscrapers. I found this historic photo to give you a feel for what the skyline looked like back in the mid ’70s. The TD Centre included the two black towers. (The CN Tower was in the process of being built!) …

And here’s one I took last summer (from Centre Island, written about in this post) …

Heading to my next destination, I went westward along King Street West …

↑ Looking west towards University Avenue, on King. There’s one of our brand new streetcars. ↑

↑ Looking north from the south/east corner of King and University. And there’s one of the old streetcars, soon to be retired. ↑

↑ Looking towards the north/west corner of King and University. There was a charity walk going on, so University was closed to traffic. ↑

↑ Looking south/west. I used to work in the building the walkers are passing. ↑

↑ Looking to the south along the sidewalk beside University Avenue. ↑

My next stop, and the subject of Part II of my “Doors Open Adventure” was a minute walk from where I leave you today.

Thanks very much for spending some of your time here. Your online company is appreciated.
xo loulou

These stories were linked to.
Summer in the City : A Beachside Picnic on Centre Island 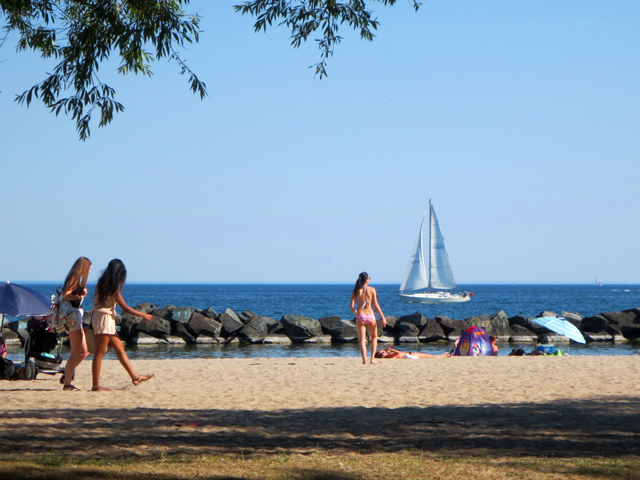